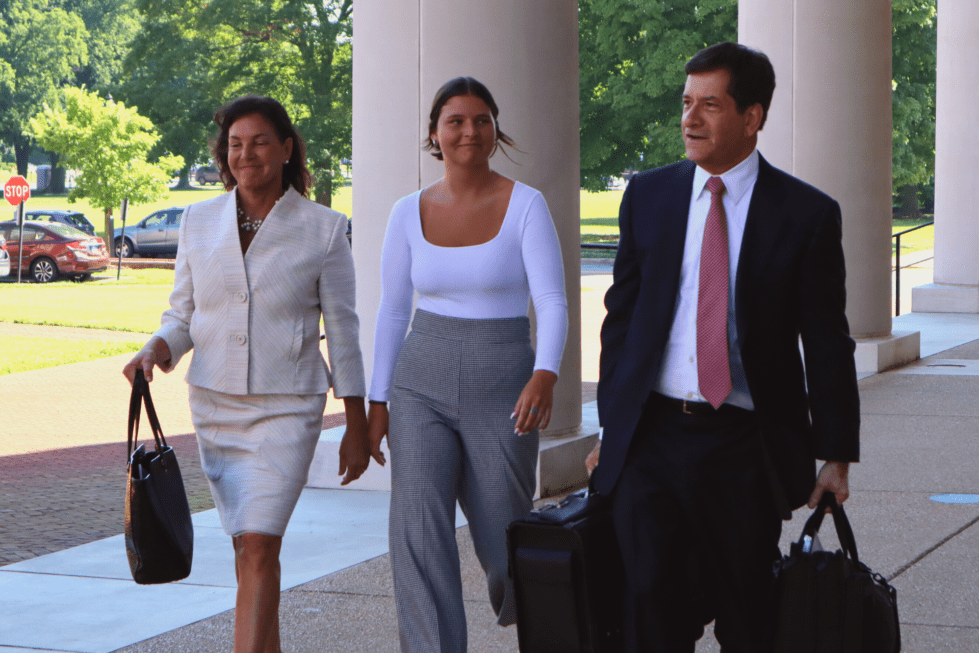 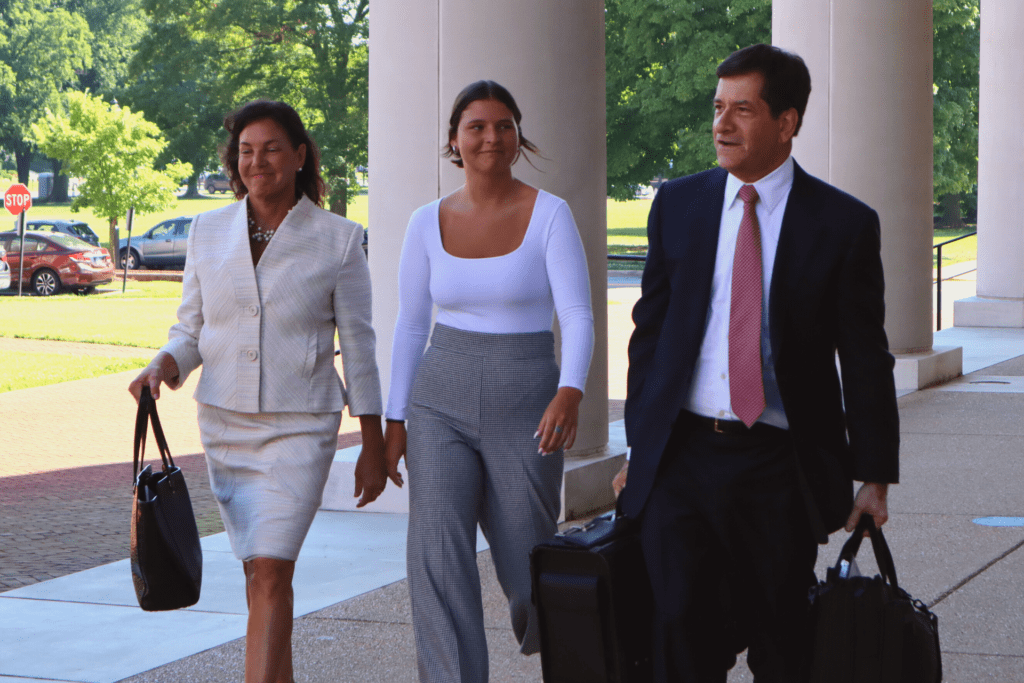 Jurors deliberated until 4:30 p.m. Thursday and have not yet reached a verdict. They will return Friday morning to continue deliberating.

McGuiness was all smiles as she entered the courtroom Thursday morning, flanked by her attorney Steve Wood and her daughter, Saylar McGuiness.

The auditor is defending herself against multiple felonies and misdemeanors alleging conflict of interest, theft, non-compliance with procurement law, official misconduct and witness intimidation.

“The auditor of accounts — the public official designed to ensure compliance with Delaware’s fiscal rules, was instead the one breaking those rules,” said lead prosecutor Mark Denney. “You heard that the state auditor reportedly seeks to serve Delawareans by ensuring the accountability in the use of taxpayer dollars to identify waste, fraud and abuse.”

Instead of rooting out waste, fraud and abuse, Denney said, McGuiness wasted money by hiring her daughter and friends while others suffered from lack of work, she committed fraud by structuring no-bid contracts to a friend’s companies, and abused her office by intimidating employees who confronted her when they became aware of her misconduct.

Defense attorney Steve Wood said the state decided on McGuiness’ guilt before they began their investigation, selected evidence that fit their theory and ignored crucial evidence of her innocence.

Count one: Conflict of interest (misdemeanor)

The state argues that McGuiness violated the state officials’ code of conduct by hiring her daughter, Saylar McGuiness, and affording her benefits not available to others, including the ability to work remotely while in college, drive a state vehicle and “bank hours” then apply them to weeks during which she did little or no work.

“Elizabeth (Saylar) McGuiness was, and apparently remains, a State of Delaware employee in the auditor’s office,” Denney said. “She was paid State of Delaware money, she shares a bank account with her mom, and her mom was not a passive participant — just the opposite. Her mom had a direct role in her employment.”

McGuiness’ defense says it’s not a crime to hire a family member. Saylar McGuiness worked the same amount of time and got paid the same as other part-time employees, only drove the car while at work and with her mother as a passenger, and earned every penny she was paid, Wood said.

“Kathy McGuiness is not guilty of conflict of interest unless the state proves beyond a reasonable doubt that Saylar McGuiness received a financial benefit greater than such benefit would accrue to others who are members of the same class of person,” Wood said.

The state can’t prove that, he said, because there were at least five part-time employees who the prosecution “didn’t bother to interview,” and the investigator “has no clue” how many part time employees worked in the office in 2020 and 2021.

“The state showed us zero evidence about the other casual seasonal employees,” Wood said. “They picked the ones they thought were best for them and they didn’t tell you about the others.”

The state argues that Saylar McGuiness’ salary was deposited into a bank account co-owned by the defendant, which constitutes theft because the auditor exercises control over the account. They also suggested on multiple occasions, without outright saying it, that Saylar McGuiness clocked more hours than the clerical work she performed should have reasonably taken.

Wood said the fact Saylar McGuiness’ paychecks were deposited into a jointly owned bank account is insufficient to convict the defendant of theft. The state has offered no evidence to suggest that McGuiness ever withdrew funds or accessed funds deposited into the account.

“You heard Mr. Denney, just now, tell you ‘Kathy McGuiness is guilty of theft,’ even though the state’s chief investigator sat there under oath and told you there was zero evidence that Kathy McGuiness ever shared any of the salary that Saylar McGuiness was paid.”

The state alleges that McGuiness arranged payments to a contractor to circumvent the state’s procurement code.

McGuiness’ defense said she can’t be guilty of structuring because the state has not proven that she willfully fragmented or subdivided contracts with the intent to avoid compliance with the state’s procurement code. In fact, Wood said, multiple payments were approved by the Division of Accounting.

The defense, which maintains McGuiness is innocent on all charges, says she can’t be found guilty of this charge for that very reason.

The state must prove that McGuiness knowingly induced, influenced or impeded a witness or victim by making a false statement, committing fraud or deceiving them with intent to affect their testimony or their availability to testify.

Prosecutors say she became aware of the investigation at least as early as June 2021. She subsequently spied on her employees, reprimanded employees for minor infractions and created a generally hostile work environment for employees she became suspicious of.

Denney asked the jury to use their common sense and said the evidence points to a “clear pattern of abuse of office.”

“Ladies and gentlemen of the jury, the defendant is guilty,” Denney concluded.

Wood reminded the jury that the state holds the burden of proof. Proof she is probably guilty is not sufficient, he said. The jury must be firmly convinced of her guilt, and if they are not, the jury must give the defendant the benefit of doubt by finding her not guilty.

Thursday marks the eleventh day of the trial.

Defense attorney Steve Wood on Tuesday asked Superior Court Judge William Carpenter to issue a judgment of acquittal on each of the five charges against McGuiness — a procedural move that’s typical for this kind of case.

Jurors will return at 9:30 a.m. Friday to continue deliberating.