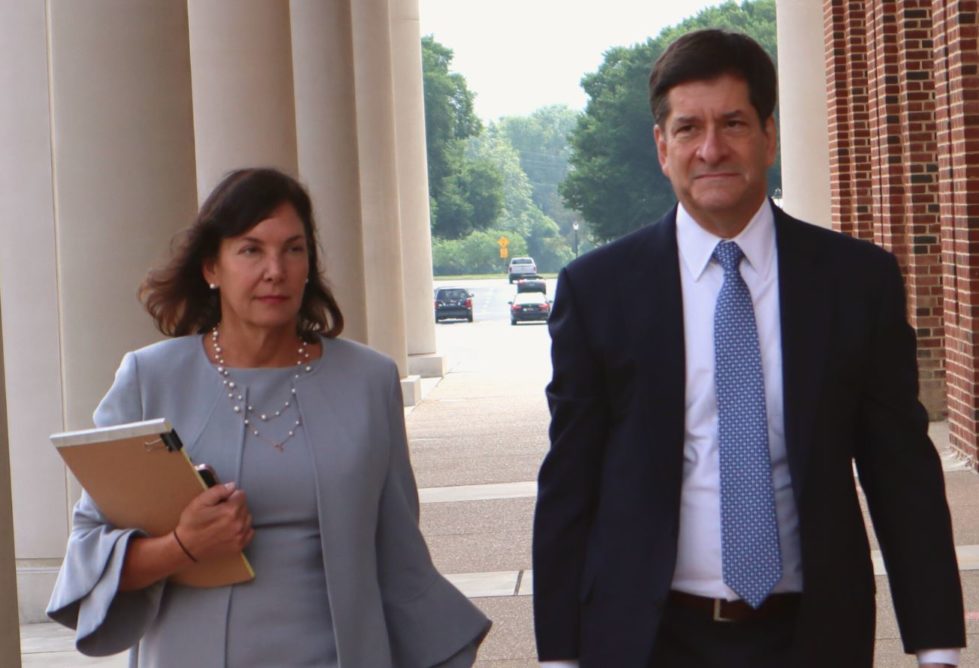 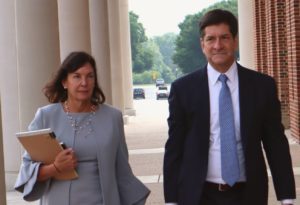 All three are misdemeanors.

The jury of 12 Kent County residents acquitted McGuiness of charges of theft and intimidation, both felonies, after a three-week trial.

McGuiness will not be sentenced until after pre-trial motions are filed and ruled on, said McGuiness’s lawyer, Steve Wood after the 12:30 p.m. verdict.

One of those will be his motion for a judgment of acquittal, he said.

The auditor faces up to a year in jail for each misdemeanor, Wood said. It’s rare for someone to be sentenced to jail for a nonviolent crime, he said.

If his motion is unsuccessful, Wood said he also would seek a retrial. If neither motion is granted, he will appeal to a higher court.

“We’re very disappointed in the verdict the jury rendered today,” Wood said. “We respect the jury’s process, but there’s no question that their thought process was influenced by multiple erroneous decisions that were made by the court along the way.”

Attorney General Kathy Jennings was quick to respond to the result of what has been a turbulent case, the first in Delaware to include a sitting statewide elected official.

“From the moment I took office, I promised that no one would be either above the law or beneath  justice,” Jennings said in a press release. Today’s guilty verdict confirmed that. After weeks of grueling trial and mistreatment of whistleblowers, the state auditor — whose job is to protect our state from waste, fraud, and abuse – has been found guilty of three crimes by a jury of her peers.

“I am grateful for the jury’s judgment, for the excellent work of our trial team, and above all else for the courage of the whistleblowers and witnesses who came forward and made accountability possible. Our office’s — and the jury’s —message is clear: abuse of office will not be tolerated in Delaware.”

The structuring charge alleged that McGuiness arranged payments to a campaign consultant in a way that circumvented the state’s procurement code so they wouldn’t be caught in routine checks.

The conflict of interest charge alleged that McGuiness violated the state officials’ code of conduct by hiring her daughter, Saylar McGuiness, and affording her benefits not available to others, including the ability to work remotely while in college, drive a state vehicle and “bank hours” then apply them to weeks during which she did little or no work.

McGuiness was acquitted of charges of theft involving the pay received by her daughter, Saylar, and intimidation, which alleged she had influenced or tampered with witnesses to affect their ability or availability to testify.

The case involved a lot of pretrial commotion.

As McGuiness’s lawyer was trying to get the entire case thrown out, McGuiness filed for re-election.

She said after the trial that she is running for re-election.

Asked if she thought the conviction would affect the election, McGuiness said, “I would have preferred a different verdict.”

McGuiness faces Democratic challenger Lydia York of Wilmington in the primary in September. The winner will face Republican Janie Lorrah in the general election in November.

“Politics as usual hurts hardworking Delaware taxpayers,” Lorrah said. “Delaware needs a change and I’m offering voters an alternative as an outsider with a fresh perspective who will restore transparency and accountability and bring confidence back to our government.”

Evidence was thrown out before the trial when Frank Robinson, chief special investigator in the Department of Justice’s Office of Civil Rights and Public Trust, admitted he had lied on a search warrant.

However, after the prosecution noted that it had obtained the information in another unrelated way, Judge William Carpenter ruled that the information could still be used.

Then, as the trial seemed set to start in May, Wood challenged the October indictment, saying the auditor should not have been indicted in New Castle County because the events described in the charges took place in Kent County.

The state quickly decided to vacate the New Castle indictment and re-indicted McGuiness in Kent County, where the trial started a few days later.

Wood, a former state prosecutor, said after the verdict that the state had engaged in multiple acts of discovery misconduct, with which the court agreed but then failed to impose any kind of a meaningful sanction.

He said the state did not define structuring the way it is in Delaware law.

Wood also said he repeatedly objected to evidence that he saw as nothing other than inadmissible and unfair character evidence.

“The court repeatedly said, ‘Well, we’ll deal with it at the end of the state’s case,’ and did not, and there’s no question that evidence likely affected the jury’s verdict,” Wood said.

He reacted to Jennings’ comments by saying, “This case began with the attorney general violating the ethical prohibitions against commenting on a defendant’s right to silence.”

People should consider all the other revelations before and during court, Wood said.

“The attorney general said at the beginning that this …defendant would be treated as all other citizens,” Wood said, “and we should all hope that’s in fact not the case, given the errors along the way.”

One reporter noted that one of the running themes of the trial was that McGuiness was trying to raise the profile of the auditor’s office after taking over from a person who had run the office for 30 years. He asked what the verdict will mean for that effort.,

“I think more people will know Delaware as state auditor,” she said.

McGuiness said the office was going to have a banner year with releases of its engagements, audits and reports, including tracking American Rescue Plan money.

“So we have a lot of great things coming up and I’m really excited and delighted to work with the fantastic team that I have,” she said.

Common Cause Executive Director Claire Snyder-Hall released a statement saying the case angered and saddened her and that it underscored the need for Delaware to have an inspector general.

“Delawareans shouldn’t have to wonder whose interests our elected officials serve,” she said. “We deserve to have confidence that our tax dollars are being well-spent, and that our government officials are serving our interests, not the interests of themselves, their families, or their cronies.”

An inspector general will search out waste, fraud, abuse, corruption, and other conduct that is harmful to the public interest, she said.

“Violations of the public trust are very serious offenses in a democracy.” Snyder-Hall said. “We trust the court will impose the sentence that is deserved in this case. And we know that Common Cause Delaware will continue working to strengthen ethics laws, until they are as clear and tough as they need to be.”