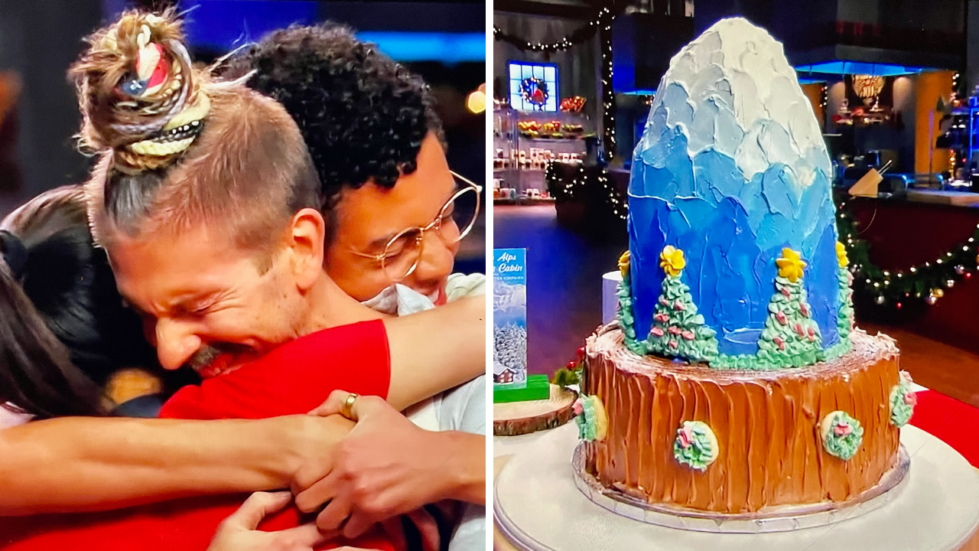 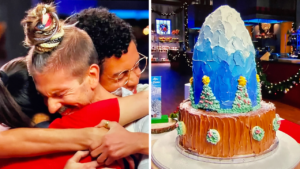 Ultimately, it was the choice between a mountain in Switzerland or a hammock in the Caribbean.

The countries were cake themes in the Food Network’s “Holiday Baking Championship” finale on Monday, Dec. 19.

The ombre blue mountain cake belonged to Dru Tevis, director of the pastry program for Rehoboth Beach, Delaware-based SoDel Concepts, who had consistently wowed the judges during the eight-week program.

Competitor and colleague Aishia Martinez had perched a hammock and palm trees — made from chocolate-wrapped pretzels — on her cake, which featured the flavors of Puerto Rico and Jamaica.

But she and fellow judges Nancy Fuller and Duff Goldman could not stop eating the multilayered slices. And all was forgiven since there was chocolate — a Swiss claim to fame.

The announcement was met with cheers and whoops at SoDel Concept’s Thompson Island Brewing Co. in Rehoboth, which had hosted a viewing party each week.

Tevis breathed a sigh of relief that the wait was over.

He’d kept the final results from everyone, including his husband, Chase Cline.

“It was hardest when I first got home,” Tevis acknowledged. “It got easier as we got closer to the end. Honestly, the fact that I won made it easier to keep the secret since I knew the payoff would be good.” 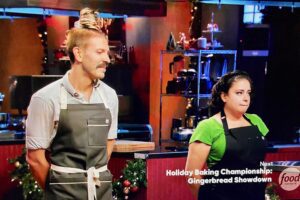 Tevis is known for his big heart and signature hairstyle, which often includes a modern take on a Samurai-style topknot. Celebrity chef Hall dubbed him a “Dru-nicorn,” and the nickname became a hashtag.

He’s also recognized for his buff physique, an attribute he’s spent hours in the gym to achieve. Indeed, he does not lack discipline.

The Westminster, Maryland, native’s love affair with desserts deepened when the restaurant worker volunteered to create a sweet finish for a Rehoboth Beach eatery’s restaurant week menu in 2009.

Tevis pursued his passion for pastry at the French Culinary Institute in New York (now the International Culinary Center).

In the Big Apple, he worked under Kierin Baldwin at The Dutch and Christina Tosi, chef/owner of Milk Bar.

Back in Rehoboth, he juggled gigs at several restaurants before landing a steady position with La Vida Hospitality, which at the time operated Fork + Flask at Nage, a catering division and the Crooked Hammock Brewery.

However, the long-range opportunities for advancement along the coast seemed limited, and he considered returning to New York. So he took a year off to travel and study.

“I wanted to have new experiences, get away to refresh myself and then decide if we would move somewhere else,” he explained in a prior interview.

Tevis took continuing education classes at the French Pastry School and the Chocolate Academy in Chicago. In Boston, he spent time at the Flour Bakery and with pastry chef Brian Mercury at Oak + Rowan. 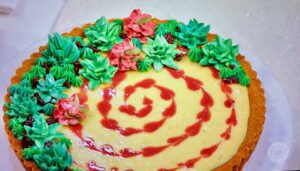 Dru Tevis propelled himself into the finals with his margarita tart featuring a pomegranate swirl and piped agave plants.

Because the category is so specialized, an open call might not get the proper response, he explained. Plus, there are more savory than sweet chefs eager to compete on cooking programs.

Tevis interviewed for both the Halloween and holiday versions of the Food Network program. If applicants don’t hear back, they should take it as a “no.”

But, just in case, they need to reserve the filming dates on their calendar. Tevis was accepted two weeks before flying to Nashville.

Each episode included two rounds, and in the first, chefs competed to gain an advantage for the elimination round.

Tevis made a margarita tart with a pomegranate swirl and piped agave plants for the finale. (The theme was succulents for a desert-inspired holiday dish.)

As the heat winner, he chose the holiday destination — Switzerland — for his last competition and distributed the other locations — including New York, Paris and the Caribbean — to his teammates.

Tevis’ chocolate-banana cake with the rocket ship-shaped mountain sat on a tier studded with cookie wreaths.

So, what will Tevis do with the cash award? Cline wants a boat, which they can dock at their Lewes home near Love Creek, Tevis said. A mini pontoon boat might be in their future.

The multicourse meal is available for pickup at Fish On in Lewes, Bluecoast Seafood Grill in Rehoboth and NorthEast Seafood Kitchen in Ocean View. The cost is $89 per person with a bottle of wine.

Fans can also sample Tevis’ desserts in SoDel Concepts restaurants, and the celebrity touch will undoubtedly be good for business.

“Dru has always been a local rock star, but to see it unfold on a national stage was awesome,” said Doug Ruley, vice president and director of culinary operations at SoDel Concepts.

“The world now sees the greatness that we have grown accustomed to,” he continued. “The outpouring of love from the SoDel staff and the community is something special. We are so proud of Dru and all he has accomplished. He is putting southern Delaware on the culinary map — one sweet at a time.”