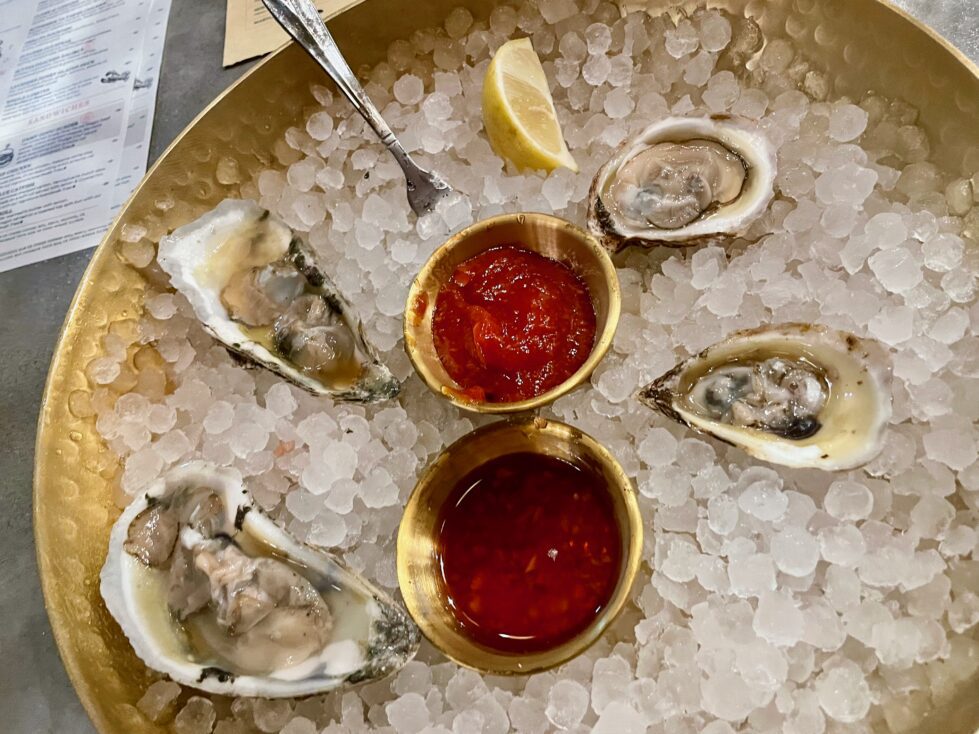 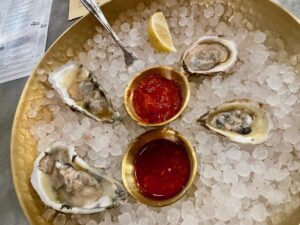 The Lewes Oyster House has served Arrowhead Points, Sewansecotts and Pink Moons, all from nearby waters and shown off in tanks displayed in the windows. Photo by Pam George.

The Lewes Oyster House proves that good things come to all who wait.

After months of construction delays, the downtown Lewes restaurant at 108 Second St. opened to the public this week.

Last week, however, the Second Street eatery gave the staff a trial run with friends and family, and one reporter talked her way into a seat at the oyster bar for a sneak peek.

The visit proved that the team had used their time wisely.

The partners’ background is impressive.

Tim Bartle is an industry veteran who worked for the Charlie Palmer Collective. Also on board is Tom Little, whom many know from his time with Crooked Hammock Brewery and its management group, La Vida Hospitality Restaurant Group.

Lewes Oyster House sports a comfortable vibe like those establishments, but the owners hardly sleep on the job.

From the logo to the menu, it is clear that they considered their concept.

The space, formerly Jerry’s Seafood, is in the Walsh Building, which was built in the 1930s.

It’s been a community center and fire hall, but most people remember the site as the original Rose & Crown, and remnants of that location remain — namely 10 taps and a handsome bar.

The partners wanted the restaurant to feel like a public house, a gathering place for the town.

And, in the old days, an East Coast tavern would have oysters, which explains why the beach’s favorite bivalves are the star.

Indeed, the stage is set from the start.

The oyster bar is on the lower level next to the expansive windows facing the street. Aquarium-like tanks that hold the oysters are nestled next to the glass.

One might question putting the shuckers’ backs to the sidewalk, but it works.

The curious paused to peer into the restaurant, and diners get a double show — they can watch the shuckers and pedestrians.

A plush banquette for a group is on one side of the oyster bar, creating a see-and-be-seen table — everyone who walks into the restaurant must pass by it.

On the other side is a wall of wines.

The bulk of the seating is on the second level, where black banquets with brass railings line an exposed brick wall.

The main bar is also on this level, as is a room that can handle private parties.

As for the art, framed photographs salute the nautical theme, and beach real estate maven Lee Ann Wilkinson, who owns the building, contributed a few of her oyster plates, which hang near the oyster bar.

The menu also pays homage to Lewes. For example, Corea cheekily named the seafood towers ($85, $110) for the fire towers in Cape Henlopen State Park, once a World War II Army base.

Along with the raw oysters, there are cooked preparations, including the New Orleans-style Buffalo Soldier ($12), fried oysters topped with gorgonzola, butter and Louisiana’s Crystal Hot Sauce.

There are plenty of noshes to go with the oysters, craft beer and excellent wine selection.

Take, for example, Memphis-style wings, crab-stuffed Kennett mushrooms ($14) , which arrive in an escargot dish, and a lobster corn dog with fries ($26).

Either way, the food is fun. And while the entrees are impressive — butter-poached halibut ($32), lavender honey-glazed duck ($31) — the sandwiches were too tempting for the intrusive reporter to resist.

Let’s talk for a minute about the fried blue catfish sandwich ($13), dredged in buttermilk and cornmeal and serve with remoulade and Pennsylvania Dutch slaw.

Blue catfish, an invasive species in the Chesapeake Bay, is delicious — much meatier and milder than their pedestrian brethren. More restaurants should be serving this sustainable and affordable species.

The lobster roll was a decent version of the Main signature sandwich, complete with the split frankfurter bun.

Clearly, one visit is not enough to experience what Lewes Oyster House has to offer. And that is a good thing.