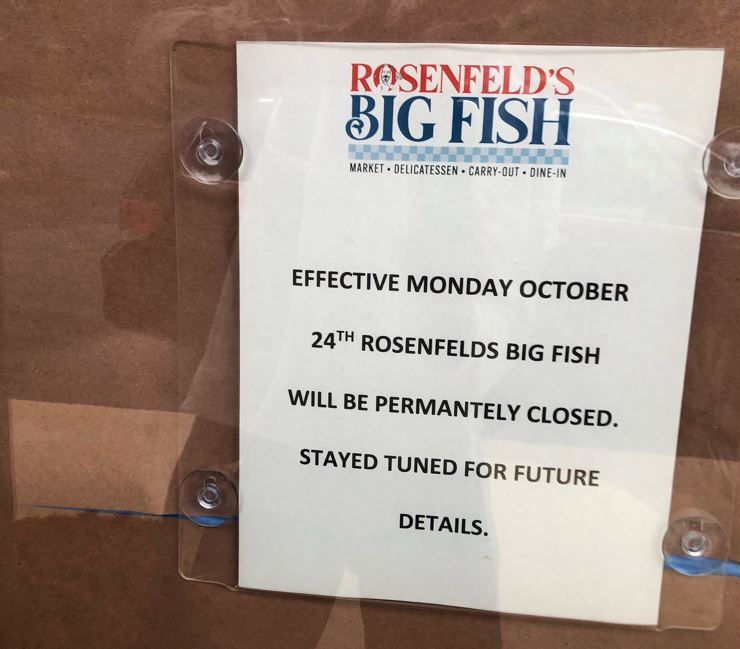 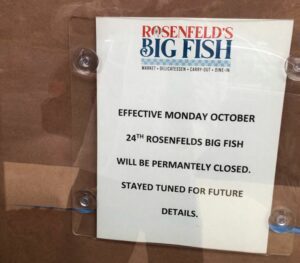 A sign on the restaurant door in the Plaza III shopping center noted that the closing was effective as of Oct. 24, after only being open six months.

Neither Warren Rosenfeld, who founded the Rosenfeld’s Jewish Deli concept in Ocean City, Maryland, nor Eric Sugrue, managing partner of Big Fish Restaurant Group, would comment on the closure.

The restaurant-market hybrid, which opened on May 12, was not the first joint concept between the two restaurateurs, and the Rosenfeld’s Big Fish in South Bethany Beach is doing well.

No doubt that is largely because area residents and visitors are familiar with the two brands. What’s more, the store is near Sea Colony, a colossal condo community without a large grocery store nearby.

The New Castle County closing could have been a double whammy for Rosenfeld, who all weekend waxed nostalgic as the Ocean City site also prepared to close. The landlord planned to demolish the building.

All that changed when the landlord saw the outpouring of interest from Ocean City customers.

According to Rosenfeld’s Facebook post, the landlord was “so moved by the outpouring of emotion and well wishes from you, our customers, that he contacted me on Friday to see if there was some way to keep us in business in OC. The bottom line is that he has put off demolition of the building until at least October of 2024, and he has reached an agreement with us to pay for a large portion of the needed repairs to the building and equipment.”

Rosenfeld’s has developed a cult-like following of fans who crave the chicken noodle soup and sandwiches so tall you need two hands to hold them.

The Rehoboth location is continually crowded, and fans were thrilled when Rosenfeld and Sugrue entered a partnership to expand the Rosenfeld’s brand.

That site closed after two years when the Marsh Road restaurant was up and running in a 4,600-square-foot space once occupied by Goat restaurant and a paint store.

It was a lot of space to fill with goods, from cheese to bagels to fish. And it also needed customers to pay for these items.

All might not be lost as far as a restaurant in the North Wilmington space.

The sign on Monday asked customers to “Stay tuned for future details.”