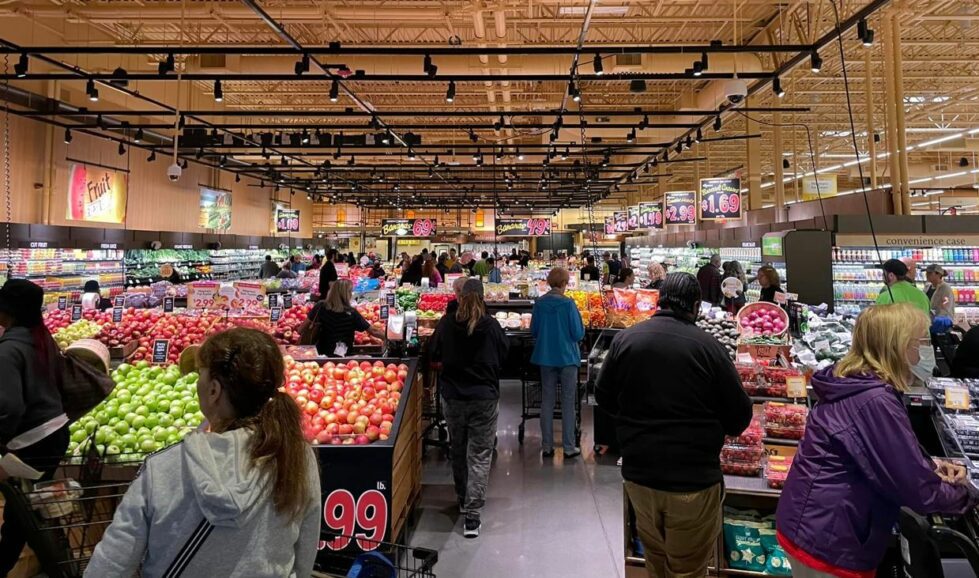 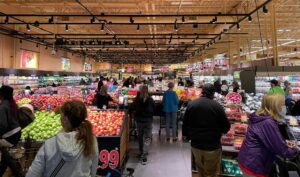 The only Delaware Wegmans opened it doors Wednesday to customers thrilled to have their own store at last. Photo by Sallie Groff Reissman.

Sallie Groff Reissman arrived at Barley Mill Wegmans at 8:45 a.m., hoping to be one of the first let in.

She was amazed to see the line of excited customers waiting in the misty weather already moving into the store.

“I thought it was at 9, but they started letting people in just a few minutes prior to me getting there,” Reissman said. “My girlfriend actually went there at 6:45 to be first in line. She said she would have had to have gotten there by 6:15 to be first.”

The forecast’s small chance of rain did little to deter the parade of Wegmans fans when the grocery chain finally opened a Delaware store.

The Rochester, New York, chain, long known in the region for its wide-ranging high-quality offerings at affordable prices including bakeries, prepared food and its own restaurant, seemed to keep teasing First State shoppers by opening locations near the state, but never in it.

That changed when Pettinaro announced in 2019 that Wegmans would be an anchor store for the developers’ reinvention of DuPont Corp.’s Barley Mill campus.

Reissman said she and her husband would frequently travel to the Downington, Pennsylvania, store, and sometimes had date night there because the food was so good.

“And, of course, you could buy a bottle of wine,” she said.

Reissman is pleased she no longer has to drive up 202 to Wegmans in Glen Mills, Pennsylvania.

So were others in line. Several people posted on line that the shoppers kept coming and that it got more crowded than they expected.

Things were only started to build when Reissman arrived.

“We were just standing in line chatting. Everybody was happy,” she said. “I was chatting in line to the man behind me. His son was the executive chef (J.J. Miller). He was so proud of his son  and he was coming in to see him. There were Wegmans people getting videos of the crowds, so they were equally excited.” 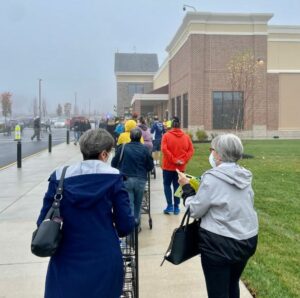 The line of thrilled customers waiting to get into their own Delaware Wegmans started moving into the store before 8:45 a.m. Photo by Sallie Groff Reissman

The 84,000-square-foot Delaware store will feature the usual staples of a grocery store along with Meals2G ready-to-cook meals; ready-to-eat salads and sandwiches; a bakery offering bread and other goods; fresh sushi; made-to-order pizza; Asian-inspired cuisine; a burger bar; a coffee shop; and its own restaurant, the Market Cafe.

It will also offer online ordering for curbside pickup up or delivery.

Since Pettinaro announced that Wegmans was coming, cult favorite Trader Joe’s and several Aldis, Lidls and other grocery stores have opened in Delaware.

Even with those riches, the Delaware Food Industry Council, which is a trade organization for grocery and drug stores, welcomes Wegmans to Delaware.

“Their expansion into Delaware is exciting for our residents,” said Julie Miro Wenger, executive director of the council. “Wegmans is a family owned business and will break into the northern Delaware market, where other family owned grocery stores are strongholds.”

The store, which will employee about 450 people, normally will be open daily from 6 a.m. to midnight.

It includes indoor and outdoor seating for 120, with 557 parking spaces available.

“I was just surprised how in and out I got,” she said. “I didn’t get too many groceries but they had everything up and running with every staffer known to man. They probably brought them in from other Wegmans.” 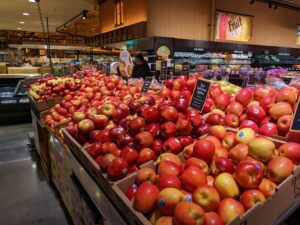 Wegmans prides itself on offering a huge variety of produce each day, like this in the Wilmington store, including organic choices, much of it grown locally. Photo by Wegmans.

The chain prides itself on offering hundreds of different fruits and vegetables on any given day, including many organic choices, some grown at its own Wegmans Organic Farm and Orchard in Canandaigua, New York.

Also in the store

The view inside Wegmans