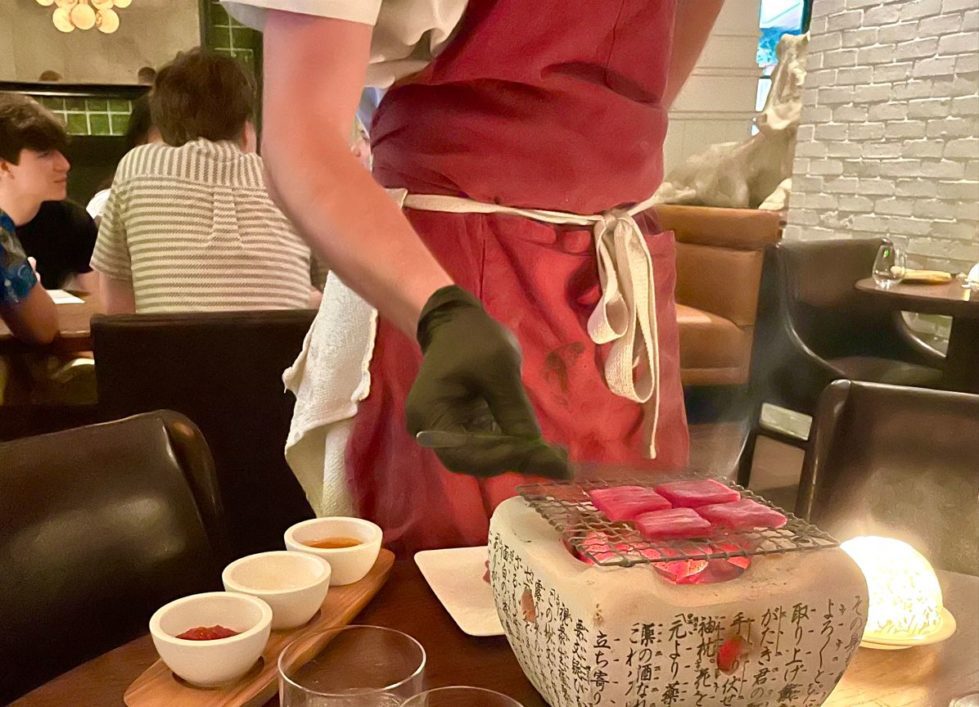 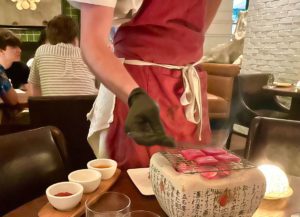 Among the many surprises at Bardea Steak is the way meals are served, such as a server cooking unseasoned squares of Wagyu tableside. Photo by Pam George.

We fully intended to get a steak. After all, that’s what carnivores normally do when visiting a steakhouse.

But once we entered Bardea Steak’s sleek space, we succumbed to the allure of the unexpected.

And there’s much that’s surprising about the new Market Street restaurant in the heart of downtown Wilmington.

The steakhouse quietly opened this week with nary a phone number on the website. (Tip: use Open Table.)

We snagged a 6:45 p.m. reservation on a Tuesday and a parking spot near the newcomer’s sister restaurant, Bardea Food & Drink. We strolled by alfresco diners tucking into the Italian cuisine, and made our way to Bardea Steak.

In the future, guests dining outside can enjoy selections from each restaurant; the point-of-sale system will send the information to the respective kitchens.

But let’s talk about the inside of Bardea Steak. The owners have made do while awaiting furniture shipments, but the attention to detail still shines.

Votive candles softly pulse under translucent domes, the gleaming cutlery is arranged on a rest, and napkins are folded into triangular packages. A statue of a bull, created by a Philadelphia artist, calmly gazes at the mixture of booths and tables.

The energy is an integral part of the ambiance, from the rolling sound of the flames in the open kitchen to the light laughter at the bar to the tableside preparations that turn strangers at neighboring tables into friends.

He’s on hand to explain the steak side of the menu, which includes a page with information on the breeds and another on the cuts — but no prices. (He can supply that as well.)

The approach provides diners with an education — Meat 101 — which is either appreciated or annoying, depending on your interest level.

Some people just want to see the cut and the price tag.

But Bardea Steak isn’t that type of steakhouse.

Instead, the James Beard semifinalists are creating an experience that includes finding the breed and cut that will please your individual palate and pocketbook.

So, why didn’t we order a steak? Simply put, the rest of the menu was too tempting to bypass.

These meats aren’t on the menu for the fun factor. DiMeo demonstrates that there is more to the animal kingdom than mass-produced cattle. (All the meat comes from small farms.)

He’s also showing his guests that all parts of an animal have merit and using them smartly defines sustainability.

For example, we ordered plantain tamale with oxtail barbacoa delivered in a small white steamer with red and green salsa.

Once the tidy packets hit the plate, the steamer is whisked away.

It was not the only show that night — or ethnically inspired cuisine.

Yakiniku features unseasoned squares of Wagyu cooked tableside on a hibachi decorated with Japanese characters. Seasonings include salt — use with caution — and harrisa ssamjang, a spicy Korean barbecue sauce.

Every presentation is beyond pretty.

Rivers stones and tufts of green moss turned clever turducken croquettes into a work of art. (Just don’t pop the rock into your mouth.)

Speaking of art, a rye cracker resembling the silhouette of a bull’s head covers Wagyu beef cheek with uni and remoulade. Under DiMeo’s deft touch, it tastes like an elevated Reuben.

The beef cheek is under a “raw” section with items that aren’t all raw, so don’t shrink when you see lobster or shrimp.

There’s also a menu category for skewers, and we had venison rubbed with chili and coffee with oyster mushrooms and a tamarind-sweetened sauce. The B at the end of the skewer is a nice touch.

Of course, there is no shortage of exacting accoutrements, which extend to the desserts.

If you watch any baking show, you’ll appreciate the pastry chef’s efforts, including a snowy pavlova and aubergine-colored macarons — a happy departure from Day-Glo varieties.

We need to go back if only to order a steak. Granted, that might be difficult given the other menu options that intrigued me.

But there’s another reason to return.

Wilmington is a city, which means of course means it’s urban. But it’s not always as urbane as our metropolitan neighbors.

Bardea, however, is a big city concept, and it’s nice to have a slice of the Big Apple without boarding a train.