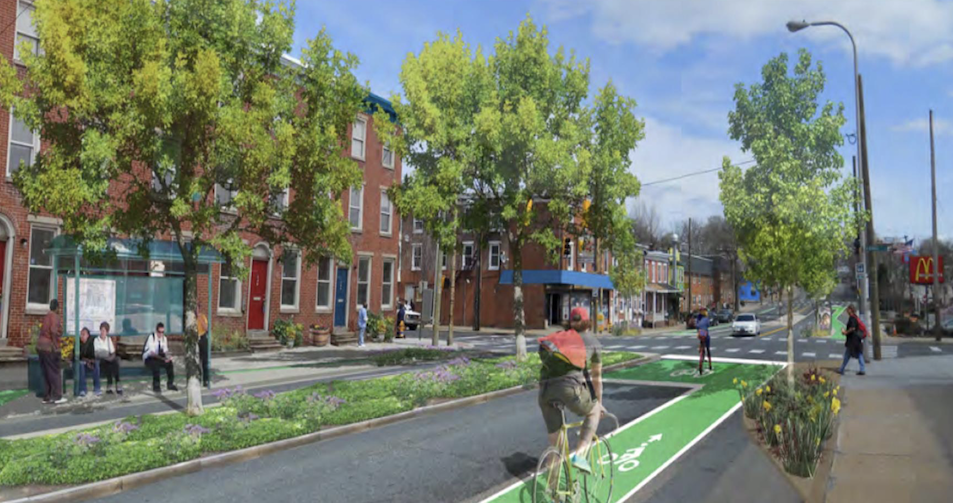 Delaware’s largest city has a master plan to improve transportation and the quality of life, and it’s called the Wilmington Initiatives.

Ten projects are listed on a landing page maintained by the Wilmington Area Planning Council. Creating a park over Interstate 95 is the most prominent and most expensive.

The initiatives go back to 1996, when Wilmington started to develop “streetscape concepts for downtown corridors.”

The initiatives now involve the city, the Delaware Department of Transportation; the Delaware Transit Corp., a DelDOT unit that operates DART buses; and the planning council.

The landing page says the projects total $45 million – which would be dwarfed by the cost of the cap park.

Most projects involve making the roads safer for bicyclists and pedestrians and making the streetscapes look nicer.

Here’s the current state of the nine other projects (which, as is often said, is subject to change).

A presentation from last spring offers a $15 million to $18 million plan to rethink Union Street between Pennsylvania Avenue and Sycamore Street.

The familiar goals: “Better function as a Main Street corridor, balancing moving cars while functioning as a place for residents and neighbors to shop, dine, work, recreate, socialize and play” and “improve multimodal mobility and connectivity.”

The latest, preferred plans call for switching from angled parking to parallel parking; bike lanes; a long, thin rain garden in one section; wider sidewalks; and space for restaurants to host outdoor dining.

DelDOT has accepted a $2.3 million bid that reconfigures Orange Street (between Martin Luther King Jr. Boulevard and 10th Street), King Street (between MLK and 10th) and Eighth and Ninth streets (between Adams and Church streets).

The “project is to provide better shelters and other amenities at bus stops within the Central Business District of Wilmington along with safety improvements for pedestrians,” Diane Gunn, a senior engineer with Century Engineering, told DelawareLive.

A floating bus stop proposed for Walnut Street in Wilmington is shown from two perspectives.

This project is intended to make it easier for people who live elsewhere in the city to get to jobs downtown. Make it safer, somehow, for bicyclists. Make it safer for pedestrians (one technique is to reduce the number of through lanes, reducing how many lanes of traffic that pedestrians face when crossing the street). Make it look nicer.

The plan calls for two or three travel lanes on Walnut, with off-street parking on one side or both. An off-peak parking lane would be evaluated between Eighth and 12th streets.

It calls for “strategic bump outs,” which extend the sidewalk into the parking lane, reducing how much traffic pedestrians need to cross.

It also calls for evaluating floating bus stops, which allow “buses to stop curbside and limit stopping times and congestion and delay” and provide “bicycle buffer from vehicles, reducing conflicts.”

It’s being designed now, with construction to start in 2024.

“Fourth Street could be transformed to emphasize its role as a gateway corridor into the city and a neighborhood Main Street by focusing on blight reduction and redevelopment, beautification, traffic calming and biking amenities,” according to its DelDOT page.

Traffic calming includes multiple techniques to slow down vehicles “and make streets safer for all users,” according to the Project for Public Spaces.

This project would add a center left-turn lane and some sort of bike lane. It’s being designed now, with construction expected in 2025.

This project is an 8-foot-wide path for pedestrians and bicyclists between S. Church and S. Walnut streets, connecting to the path over the Sen. Margaret Rose Henry Bridge and possibly connecting to the Chase Fieldhouse. Construction is expected in 2025.

The 1500 block of N. King Street would be reverted to two-way traffic in this project, which does not yet have a construction timetable assigned.

The second phase of this project calls for pedestrian upgrades along Heald Street and New Castle Avenue. Construction was scheduled to start last fall.

The third phase involves improved lighting; crossings, sidewalk and bump out around Hicks Park; a new signal and crossings at C Street and New Castle Avenue; and bicycle striping on S. Claymont Street. Construction would start in 2026.

This project involves several crosswalks near the school. No timetable is given.

A bridge would be replaced.