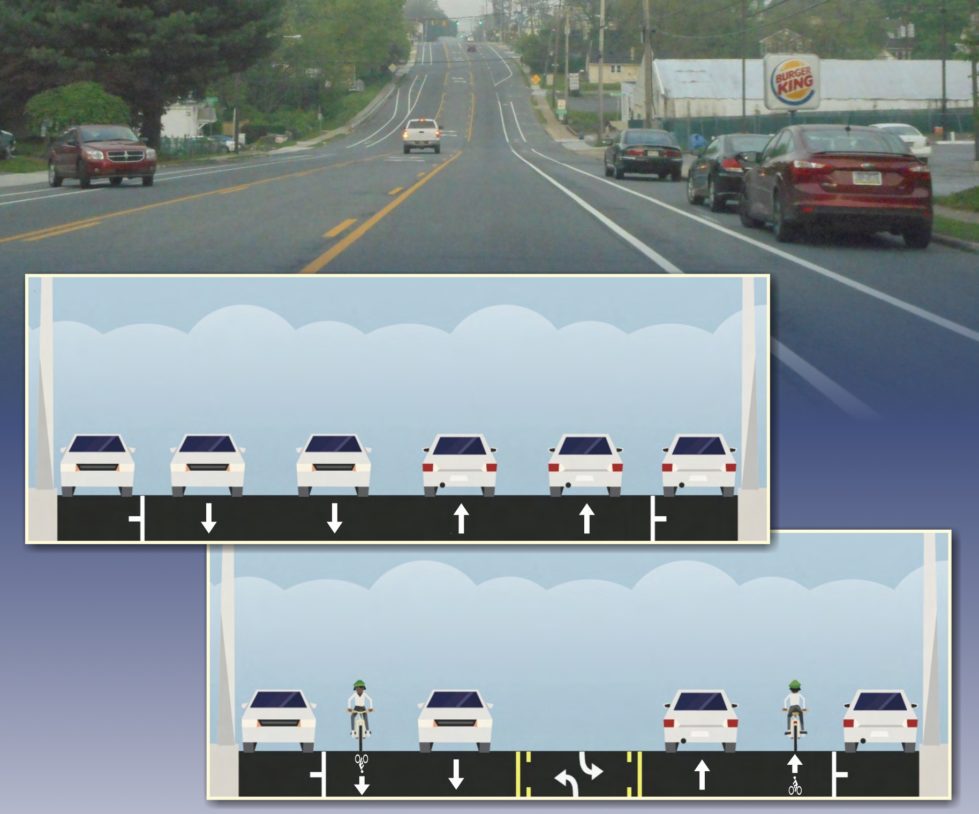 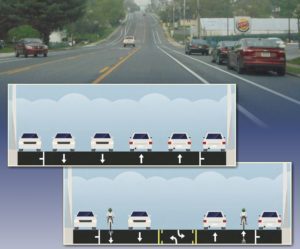 Foulk Road may be put on a road diet, just like Philadelphia Pike was. Photo from study commissioned by DelDOT.

The thoroughfare had problems with accidents, so Delaware Department of Transportation officials wanted to reduce the number of through lanes and make other changes — a concept called a road diet.

“Is it perfect?” Brett Saddler, executive director of the Claymont Renaissance Development Corp. “At the end of the day, there are fewer accidents and lower speeds, and that’s what is most important.” (More later on why he feels it’s not perfect.)

DelDOT stunned North Wilmington this month with its plans for Foulk Road. It’s just the start of the discussion, as more than 200 people who attended a workshop on the project were told.

“The primary purpose of this project is to reconstruct the failing pavement and remedy drainage issues,” DelDOT says of Foulk Road. “A concept is being studied that would reconfigure the road to create space for a continuous sidewalk, bicycle lanes, a center left turn lane and one lane of travel for each direction.”

In 2009, DelDOT studied the feasibility of changing a mile of Philadelphia Pike, from Gov. Printz Boulevard to Rolling Road, from two lanes in each direction to one lane, with a dedicated turn lane in the middle, bike lanes and on-street parking. Such changes would help with safety, the study concluded.

DelDOT put the pike on a diet in 2012 and several years later commissioned an engineering firm called RK&K to study the result (which actually went further south, to Harvey Road). Some highlights:

• The 2017 report by RK&K said there was no speed study in 2009, but they found that, depending on the stretch, 8% to 54% of vehicles followed the speed limit. Speeds were lower in the diet area than nearby, so “the road diet is effective in encouraging compliance with the posted speed limit.”

• The intersections with Gov. Printz and Harvey Road continue to operate at roughly the same level of service, a little better at Harvey and a little worse at Gov. Printz.

• The number of vehicle crashes fells 13%, and another metric called the crash rate declined 11%. Based on analysis of crashes involving pedestrians, DelDOT considered more changes for this stretch of Philadelphia Pike.

In 2018, DelDOT studied pedestrian accidents on the 3.6 miles of Philadelphia Pike from Harvey Road to Lea Boulevard. It made recommendations for the short, medium and long term.

The one mid-term recommendation was about lighting.

DelDOT did not respond to requests for comment about its plan for this stretch of Philadelphia Pike.

Philadelphia Pike’s road diet has created “more of a Main Street feel” for Claymont, Saddler said, which is one of the goals of his organization.

In retrospect, he wishes that DelDOT had installed a sign on Philadelphia Pike southbound warning drivers how the left lane was onto Gov. Printz only, and the right lane was the through lane.

Down near Harvey Road, he’s concerned there are too many entrances and exits into businesses that can clog the road. “There are improvements that can be made other than road diets,” he said. 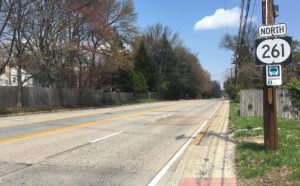 DelDOT wants to reduce the number of lanes on Foulk Road (Photo by Dough4872, from wikimedia)

Meanwhile, back on Foulk Road

Through Aug. 5, DelDOT is patching Foulk Road between Route 202 and Lanside Drive (just north of Silverside Road) with warm mix.  The work will run 9 a.m. to 3 p.m. weekdays. While crews are working, there will be intermittent flagger-controlled lane restrictions northbound and southbound.

The DelDOT hearing was July 12, and four local legislators the next day sent a letter to DelDOT Secretary Nicole Majeski.

“While the project is still in early stages of development, we wanted to ensure that the concerns and questions of impacted residents would be fully addressed and taken into consideration as planning for the project continues,” Rep. Debra Heffernan, D-Bellefonte, wrote on Facebook.

The letter was signed by Heffernan, and Reps. Larry Lambert, Krista Griffith and Sean Matthews.

Ruth Linton, owner of Highland Orchards Farm Market, whose family has lived on Foulk Road since 1832, has been sending letters to politicians and other thought leaders about the road diet.

“The project as proposed would have many long-term negative consequences for the Foulk Road community,” she wrote in one. “Foulk Road is not a park or scenic by-way. It is a road that gets people to parks or to scenic areas, but in and of itself, it is a practical road. Homes, businesses, schools, and churches fill the sides.

“I do see that making it incredibly annoying to drive on Foulk Road will deter customers and thus businesses will suffer as a result.

“As a sprawling community, cars are needed to get us to all the different parts of our lives.”

“How is this improving the quality of life for those of us who live and work here?” she asked in another.

“I am completely in favor of sidewalks and fixing the drainage, but I am skeptical about what is different now that causes someone to believe these issues can be addressed with success.”