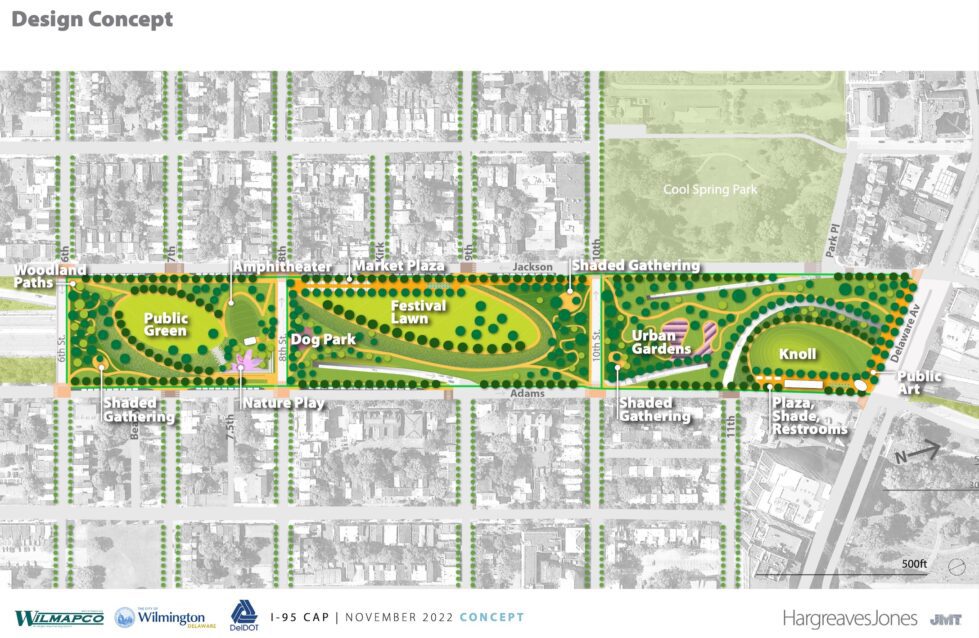 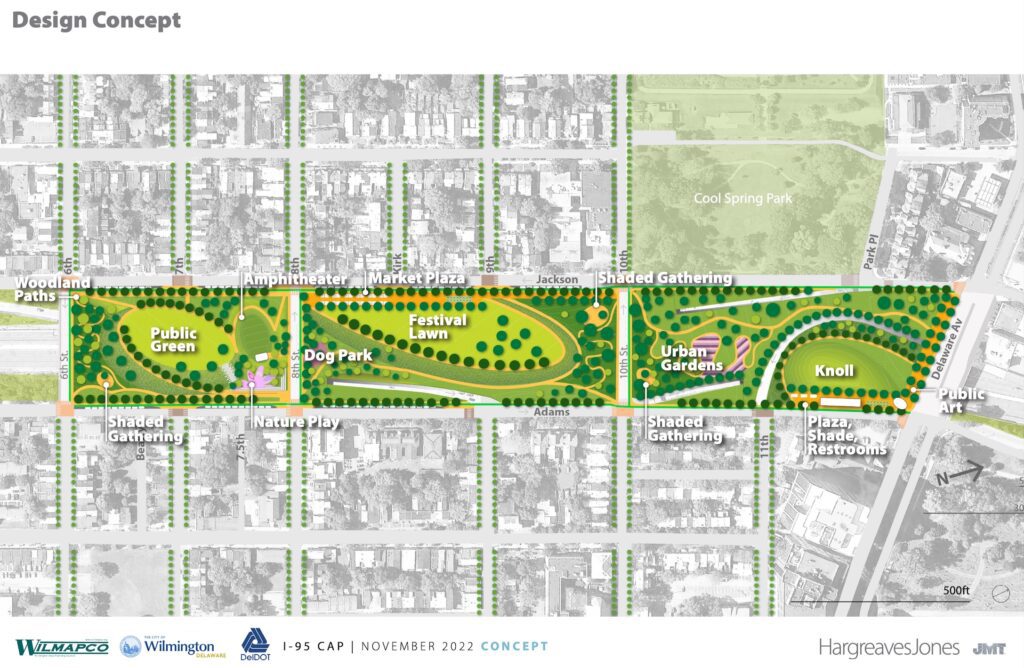 The final draft plan for the I-95 cap park in Wilmington.

A final draft is out for a plan to cap Interstate 95 in downtown Wilmington and create a 12-acre park atop the newly renovated highway.

“Can it be done?” regional planner Dave Gula asked rhetorically. “We believe it can.”

“Absolutely,” consultant Mary Margaret Jones said at a public meeting Thursday when asked for her gut feeling about getting the massive funding that the project will require.

“I believe there’s enough energy to repair these wrongs,” she added, referring to how the fabric of Delaware’s largest city was split when the interstate was constructed a half-century ago and how the park would enhance the quality of life for its neighbors, downtown workers and folks further afield.

The Wilmington Area Planning Council, where Gula works, for a year has been planning a park. Staff members developed multiple versions and made adjustments after gathering public input and technical data on things like traffic.

The latest plan will get more reviews and by mid-December will be opened up for public comment for a month on the WILMAPCO website. The goal is to have it endorsed in one more key vote by mid-January, when it would then become eligible for government funding.

Funding might take a year or three, said Jones, president of Hargreaves Jones, a firm whose work also includes planning the similar Park at Penn’s Landing, crossing over I-95 to connect Philadelphia to the riverfront. Design and engineering would take more than a year, she added, and construction three to five years. 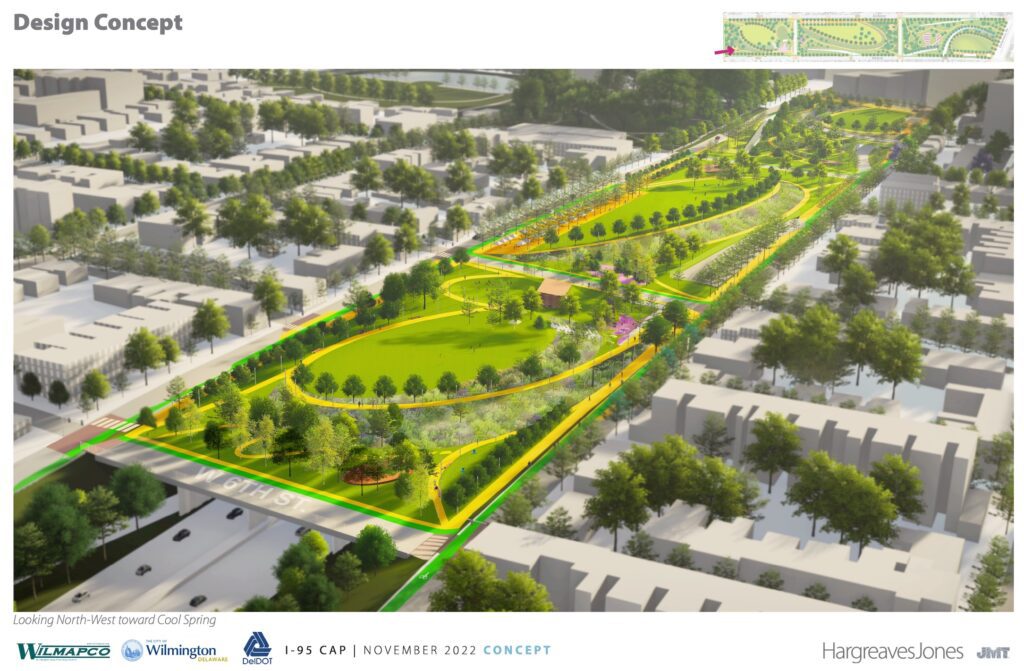 A drone’s view of the final draft plan for the I-95 cap park in Wilmington.

The plan for the I-95 cap park

Seventh and Ninth streets would be closed, and Eighth and 10th, which both are one-way heading west, would remain open. The existing I-95 entrance and exit ramps would remain.

Traffic calming is “feasible” along both Jackson and Adams, Jones said. Traffic calming includes multiple ways to slow down vehicular traffic, and one option is to reduce the number of lanes on both streets and use that space for parking (more than 100 spots are feasible) and bicycle paths. Traffic calming was proposed earlier this year on Foulk Road in North Wilmington.

The plan gives different names to the grassy areas in each of the three sections: the Public Green, the Festival Lawn and the Knoll. Since the park slopes down from Jackson to Adams, Jones said those areas would offer “amazing views” of downtown.

The section between Sixth and Eighth would also have an amphitheater and a Nature Play area, featuring hills and boulders for energetic children.

The section between Eighth and 10th would have a dog park and a Market Plaza, for food trucks, a farmers market and similar activities.

The section between 10th and Delaware would have the Urban Gardens, a plaza for food trucks and the like, restrooms and public art.

During the meeting, Jones, Gula and other speakers said that some questions are too specific to be answered now about the I-95 cap park.

North Adams resident Audrey Pittman, for instance, brought up the idea of somehow resurrecting Shipley Run, a stream that flowed under her home a century ago and was buried as part of the city’s sewer system.

Along the way, Jones mentioned a few details, such as moveable chairs (a hit in Manhattan on parts of Broadway that have been closed to traffic) and an interactive fountain.

Parking was a repeated issue, and Gula said guidelines for federal funding discourage including a parking lot as part of the project.

So was traffic. Since the park is supported by a large number of governments and other stakeholders, Jones said they might test closing Seventh and Ninth streets for a few months as a study before progressing further.

When asked about crime and safety, Jones said a park recently completed by her firm has “completely changed” a crime-ridden neighborhood in Oklahoma City.

Although the planners are working under a mandate of not changing I-95, the presentation offered two ways to support the park’s infrastructure: an “open” one, with very long beams extending the full width between Jackson and Adams; and a “closed” one, where some land would be filled in, creating a vertical wall around the highway and allowing for shorter beams.

The Delaware Department of Transportation is the agency responsible for maintaining I-95, “and DelDOT would have to figure out how to pay” for the park, Gula said. He also predicted that the state would operate the park.

One promising pot of money for construction is a Reconnecting Communities program that’s part of a federal transportation bill that allocated $1.6 billion to Delaware. U.S. Department of Transportation Deputy Secretary Polly Trottenberg said in November of 2021 supported such funding to “fix some of the more damaging historical legacy of I-95 that residents of the city of Wilmington still live with.”