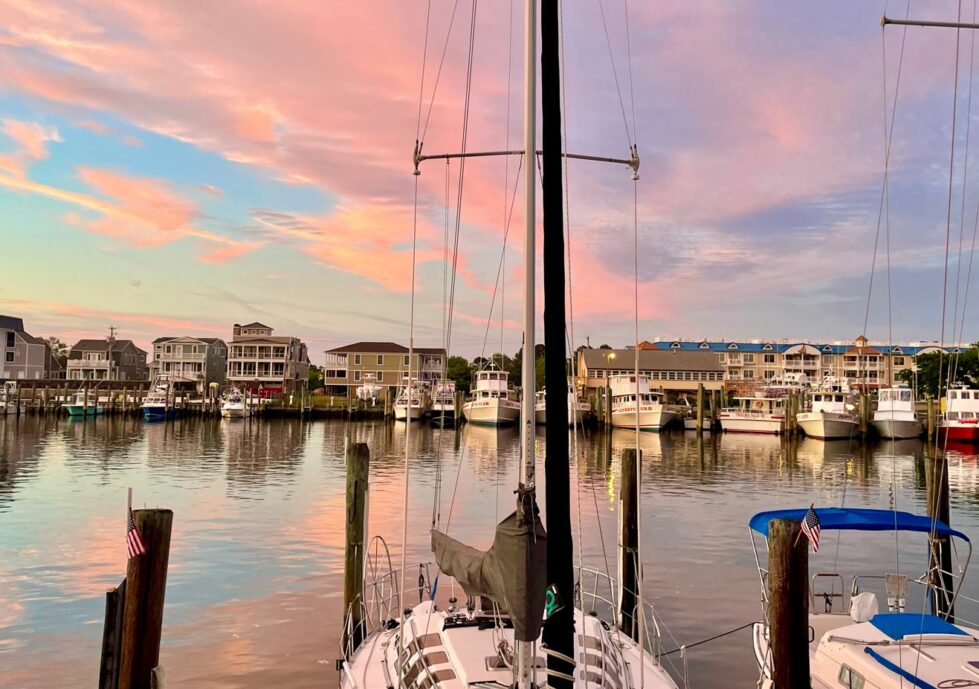 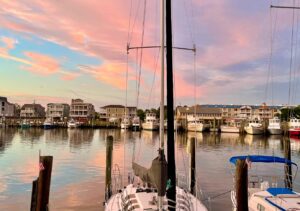 kee The charming town of Lewes has morphed into a waterside restaurant row.

In the mid-20th century, Lewes, Delaware, was known for menhaden fish factories, and locals referred to the distinct aroma as the “smell of money.”

The odor kept many tourists away, which in turn kept developers from tearing down city blocks to build motels.

Bicentennial-related activism — and the death of the local menhaden fishery — led to preservation initiatives and a listing in the National Register of Historic Places.

More recently, the aromas that drift onto Second Street and Savannah Road are far more appetizing. Now foodies dining in Lewes vie with history buffs for a seat at some of the Culinary Coast’s most popular restaurants.

We’re not suggesting you skip a tour of the Cannonball House for a table at Kindle. There’s time to do it all.

We’re expecting the opening of this Second Street newbie any day now. It’s in the Walsh Building in space formerly occupied by Jerry’s and, before that, Rose & Crown. The latter is now in the Hotel Rodney, a short walk away.

The new restaurant’s oyster bar is front and center on the lower level, but the owners kept the Old World-style bar that many loved about the first Rose & Crown. Along with oysters, expect craft cocktails, burgers and innovative dishes. Sean Corea, formerly of Nage, is in the kitchen.

Bramble & Brine at The Buttery

This relative newcomer carries on a legacy — or three. Bramble & Brine was the first restaurant that Megan Kee opened. It was in Rehoboth and closed. Kee resurrected it in the Trader Mansion, which was famously home to The Buttery, a longtime fine-dining restaurant that closed a few years after its sale.

Kee gave the Victorian a makeover — inside and out — and divided the downstairs into themed dining rooms, including the Pink Pony, named for a Rehoboth Boardwalk nightclub that longtime locals remember with fondness.

Kee is a collector of all things vintage, and she’s furnished the restaurant with tasteful but fun items. Chef Paul Gallo, who also worked at Nage, is in the kitchen. 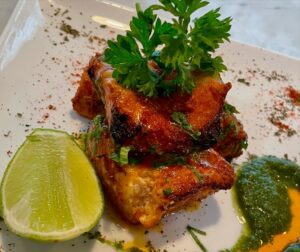 Swordfish Tikka with yogurt and green chutney is one of the choices at Raas, an Indian restaurant in Lewes.

When most Delawareans think of Indian cuisine, they picture mom-and-pop eateries in New Castle County. Raas, however, has an upscale take, thanks to the environment and the chef, Gyanendra (GG) Gupta, who has cooked in luxury resorts in the Caribbean and India.

The setting is a Victorian with elegant coral-and-teal wallpaper and a wide porch with an attached gazebo.

The prices reflect the top-shelf ingredients and beautiful presentations. Whole fish is a specialty. 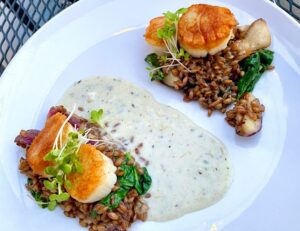 Heirloom’s scallops on farro with radishes and greens were one choice on an always-changing menu.

Much has been written about this award-winning restaurant from Meghan Lee, who continues to rake in the accolades even with the inevitable personnel changes.

The charming eatery is in yet another Victorian, and the front room is in demand. Credit the bay window and corner fireplace.

The menu changes with the seasons, but innovation is the taste du jour.

Located next to Dogfish Inn, this popular restaurant was opened by Matt DiSabatino and is now operated by Big Fish Restaurant Group.

The crab bisque, blackened tuna pasta and Striper Bites club have been on the menu for years. But here’s a surprise — the restaurant sells some fantastic sushi. 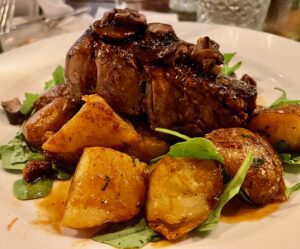 One of the specials at Kindle is their $35 filet with a glass of wine.

DiSabatino and partner Ian Crandall own Kindle, which started in Milton but found firm footing after its move to Lewes. The partners have had no trouble filling the addition they built during the pandemic.

Locals pour in on Thursdays for the 8-ounce filet mignon and red wine deal ($35 on a recent visit).

The partners also own the neighboring Half Full, which is devoted to artisan pizzas, wine and beer. (The menu also includes some salads, soup and dessert.)

The space is one reason for the limited menu. However, it’s a tad larger than the original location, which now houses the tiny Olive & Oats by Azafran, a breakfast and lunch spot. 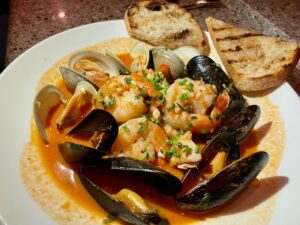 Gary and Lorraine Papp’s restaurant is in the old Gilligan’s. Well, it’s actually the restaurant that Gilligan’s built on its former site before closing.

The Papps, who were the opening chefs at The Buttery, are area favorites, and after tasting the food, you’ll known why.

The cuisine is best enjoyed while sipping a cocktail with a view of the Lewes and Rehoboth Canal.

Across from Bramble & Brine, Touch of Italy has a small but often crowded restaurant with an impressive menu featuring Italian favorites.

The crowded case of prepared foods, cheeses and baked goods is equally notable.

A second long-awaited Agave site opened on Route 1, but it hasn’t stopped the crowds from forming outside the doors of the original restaurant on Second Street.

Some credit fish tacos served in a puffy fried tortilla, while others maintain that the margarita is why customers keep returning.

The three flavors of guacamole are certainly worth the trip.

Tip: Put your name on the list and grab a drink at another establishment. Or shop in Second Street boutiques. And if you don’t want to wait, there are plenty of other options.