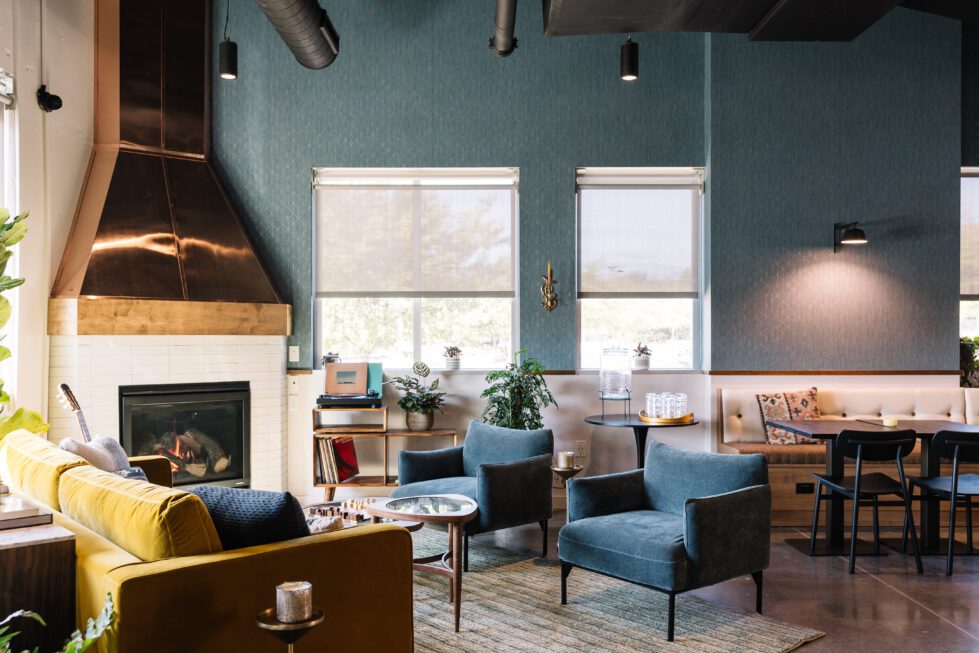 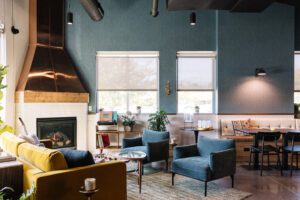 The shop will be one of the new elements of Avenue North’s $300 million redevelopment of former Astra Zeneca property off U.S. 202 that aims to provide a work-play-live environment.

Developers Delle Donne & Associates wanted to focus on local brands and reached out to Brew HaHa! owner Alisa Morkides to see if she was interested.

“They didn’t want a Starbucks or chain,” she said. “And they basically made us an offer we couldn’t refuse.”

Brew HaHa!’s nearby Concord Pike location needed updating, and Morkides — who has been on quite the tear upgrading her locations, particularly in Greenville and Trolley Square — loved the idea of being part of the Avenue North project.

The new shop, at 1000 Renaissance Way across from Fairfax Shopping Center, will include a 4000-square-foot interior , a 1,400-square-foot three-season patio with Space Age stylings and a conference room.

“We really want to focus on getting business people in,” she said.

She expects people who like to take a break from working in an office or at home by working in a coffee shop also may want a space to hold meetings.

Morkides likes the Avenue North space so much that she’s moving the company’s headquarters into the building. 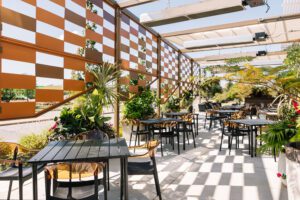 The striking patio at Brew HaHa!’s Avenue North shop is the first thing customers will see as they drive in. Photo by Becca Mathias

She said she hopes to do more with wine at Trolley Square and add quiches there and at Avenue North.

Morkides said she chose the mid-century theme because the property sits in the middle of a lot of subdivisions built in the 1950s and 60s. The neighborhoods are becoming more diverse and more populated by Millennials who like the modern styles popular when the homes were built.

The building she moved into had been offices, so walls needed to be knocked down to create the inside space..

The final product, including indoor and outdoor fireplaces, the furnishings and even the art on the walls is meant to be reminiscent of mid-century modern.

As with her other stores, she will not have a drive-through window, which she believes takes away from the ambiance and focus on the customer.

Morkides enjoys setting the look of her cafes into the history and mood of the area. 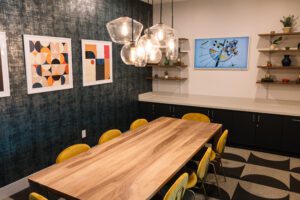 Her Greenville store is meant to evoke a lovely living room in a Greenville manor house, and Trolley Square is a nod to the area’s industrial history and the Brandywine River School of Art.

She and her staff decorate their stores themselves.

“We just love the cultural and industrial roots of Wilmington,” she said.

RELATED STORY: Falafels are having a moment in Delaware

Architecture firm Bernardon helped envision the look and recommended some things like wallpaper, but Morkides and her Director of Operations Jillian Willis found all the furnishings and art themselves.

They use online sites like Wayfair for furniture and rugs but also shop in stores such as Target or Bed, Bath & Beyond.

“It’s all about colors and we don’t have any training in this but you just know if it’s the right color,” she said. “I must have bought 50 pillows and exchanged them  or put them somewhere else because I had to find just the right pillow.”

They hired local carpenters to make their tables and while some of the art was bought at auction, Morkides fell in love with the work of Wilmington artist Susan Benarcik and has several of her works up. 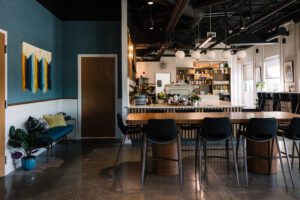 The Avenue North Brew HaHa! hopes to appeal to workers in the new work-live-play development. Photo by Becca Mathias

The look is finished off with plants provided by Erica Boston of Binkley Horticulture, who also provided the plants for the Trolley and Greenville stores.

“She’s amazing,” Morkides said. “She is expensive but very, very worth it.”

The store will include a record player and vintage LPs that customers can play. Morkides hopes to bring in live music, too.

The Avenue North shop will be light-filled, she said, because of windows that look into the patio, which will seat about 45.  Strong heaters have been installed outdoors to make it usable for as much of the year as possible.

Morkides worries that it may be hard for customers to find the Avenue North store. It will be marked by “now open” signs but a permanent marker will take a few more weeks to arrive and be installed.

“When you drive in, there’s actually a sign to the right that says Brew HaHa!,” she said. “Hopefully people will find us.”