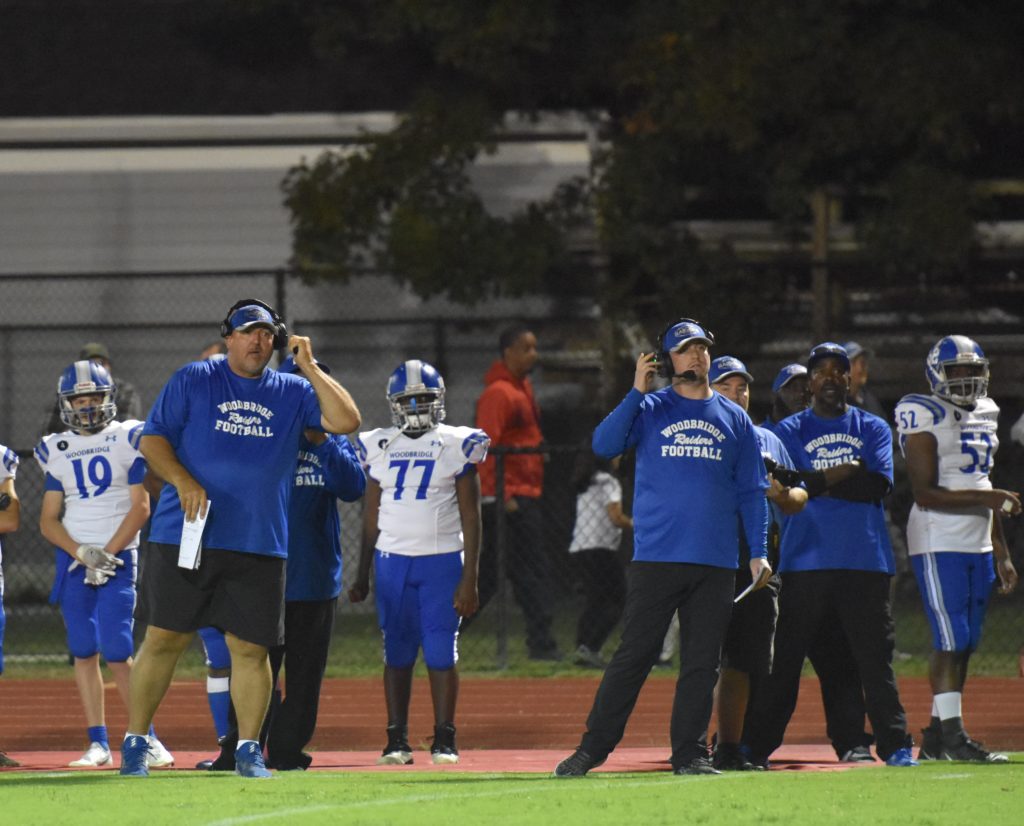 Greenwood – Between the rain squalls and at times stiff winds the Woodbridge Blue Raiders came back from a 14-0 first quarter deficit to win their eighth straight game 22-14 in front of a sparse, but electric crowd.

The win clinched the Class AA District 3 championship for Woodbridge with that comes an automatic berth into the upcoming DIAA State Football Tournament.

“It may have not been a pretty win, but like I told the kids after the game. You made history you are the first team to win this new conference,” Woodbridge head coach Marvin Dooley said.

On the next play Jonathan Tyndall connected with Jalen Morris for a 20 yard touchdown pass. The conversion run failed and the Spartans jumped out to a 6-0 lead with 9:35 to play in the first quarter.

Lake Forest wasted little time getting to the endzone again, after forcing Woodbridge to punt the Spartans mixed a few runs in with the passing game to get to the red zone.

Then with 5:06 to play in the first quarter Jalen Morris connected with a wide open Johnson Oakley on a halfback pass for a 19 yard touchdown. Calif Spencer went around left end untouched,  giving Lake Forest a 14-0 lead it was beginning to look like the Spartans would ruin the Blue Raiders Homecoming.

Weather and field conditions would affect Lake Forest as well, with Morris back to punt the snap sailed over his head deep in their own end of the field, Morris was able to chase the ball down and get the punt off, but Woodbridge would begin their next possession at the Lake Forest 20 yard line.

On the first play of the Woodbridge drive, Kenny Newton went around left end taking the ball to the one yard line. One play later Newton scored on a one yard run and added the two point conversion as the Blue Raiders cut the lead to 14-8 with 21 seconds to play in the first quarter.

On the ensuing kickoff Ellis Cannon forced a fumble and the Blue Raiders recovered at the Lake Forest 32 yard line.

On second down and nine from the 23 yard line Newton took the short shotgun snap stepped back and connected with Noah Matthews for a 23 yard touchdown. Newton ran around the left end for the two point conversion giving Woodbridge a 16-14 lead with 10:12 to play in the first half.

Woodbridge would add a score at the end of the first half when Seth Smart hooked up with Colin Hastings on a 20 yard pass play for a touchdown. The conversion run would fail and Woodbridge extended their lead to 22-14 with 1.2 seconds left to play in the first half.

Lake Forest would threaten twice deep into Woodbridge territory in the second half, but the Woodbridge defense would stiffen each time thwarting the Spartans scoring attempts.

“Rasheed Stones plays off of the leadership of Wyatt Wright on our defense, I think Rasheed is also one of the best linebackers around,” Dooley said.

Stones and Wright led the Woodbridge defense with tackles helping shut down several Lake Forest drives in the fourth quarter.

“It was sloppy field conditions and our pass rush just seemed to not be able to get their footing, but they stepped up and made the stops in the second half,”

Newton surpassed the 1,000 mark on the season as he carried the ball 39 times for 166 yards, he rushed for one touchdown and threw for another.

Tyndall completed six of 17 passes for 105 yards and a touchdown for Lake Forest.

Woodbridge improves to 8-0 overall and 5-0 in District 3, the Blue Raiders will host Red Lion Christian Academy next Friday with a 7:00 kickoff.

Lake Forest fell to 4-4 overall and 1-4 in District 3, the Spartans travel to Delmar next Friday with a 7:30 kickoff.