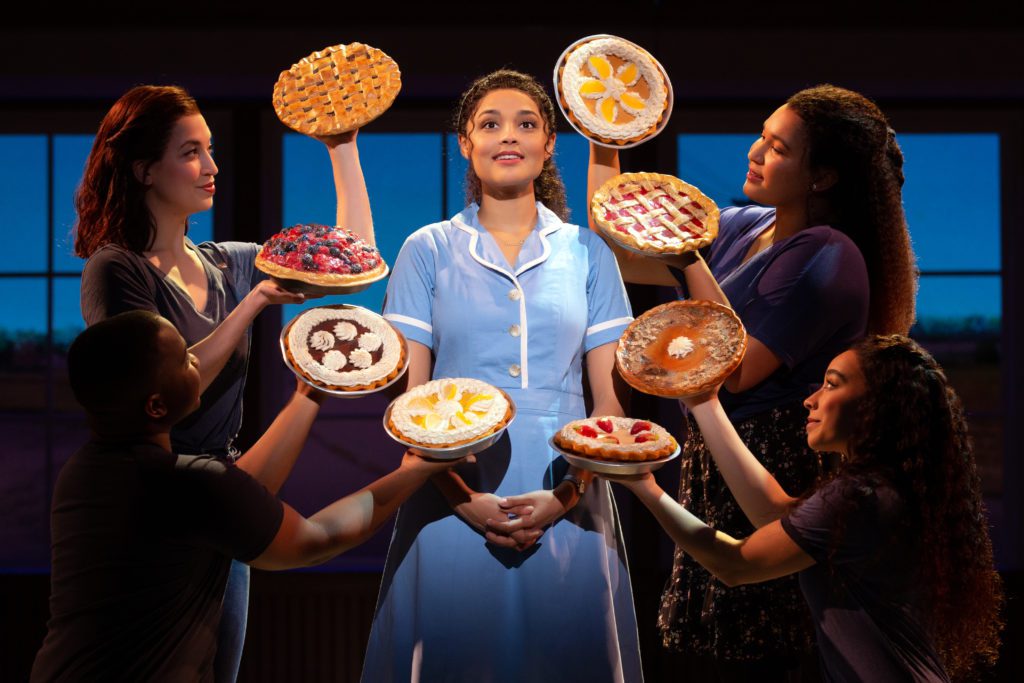 When “Waitress” opens Nov. 18, it becomes the first show on stage in 617 days for the Playhouse on Rodney Square, which will be showing off a $1.3 million renovation.
Jisel Soleil Ayon will take the stage as pie-making waitress Jenna as patrons watch from new, wider seats in an theater that’s been freshly painted with new carpets, lighting and draperies.

Seats will be 2 to 3 inches wider, with the widest in the center floor section on rows E to M, said Mark Fields, executive director of The Grand Opera House, which operates the Playhouse, located in the Hotel du Pont. The seats become more narrow as the rows curve out to match the traditional configuration.

The chairs will feature seat cushions made of springs and foam to ensure a comfortable sit, instead of the hard cushions compressed by more than a century of derrieres settling in to be entertained.

The backs of the seats are slightly more upright, meaning there’s about an inch or so more room at the top, making the space between rows slightly more spacious.

Ayon plays a married waitress choosing between her abusive husband and a handsome-but-married doctor. Her pies reflect her emotional state as she defines herself through her relationships with the men: Pineapple Upside Down Pie, Got My Vote Rhubarb Compote Pie and Sweet Victory Pie.

Patrons, however, won’t have to worry about their waistlines expanding in those comfy new seats: Jenna doesn’t share with the audience, and the traveling show won’t be selling the pie jars offered at some shows. 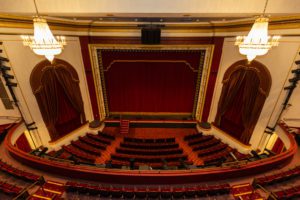 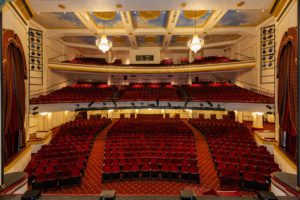 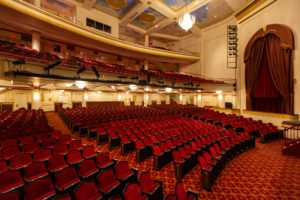 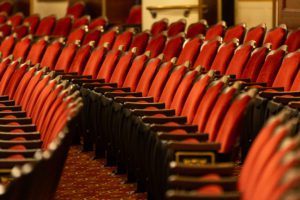 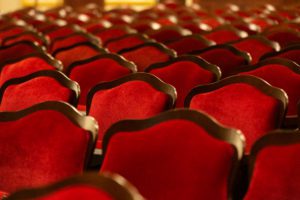 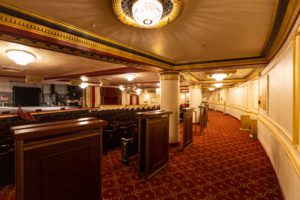 The 108-year-old Playhouse’s renovation during the COVID-19 lockdown was paid for by longtime patrons Gerret and Tatiana Copeland.

“For more than a century, The Playhouse on Rodney Square has entertained Delaware with a parade of Hollywood stars, illustrious Broadway musicals and famous speakers. But in recent years, the physical appearance of the theater didn’t complement the magic happening on its stage,” Tatiana Copeland said in a press release. “Gerret and I are pleased to have provided the gift for The Grand to refresh and brighten the Playhouse during this period of extended closure. This gift not only benefits The Grand, but also the audiences that enjoy performances there.”

The Grand management was surprised to discover several things when renovations began. In comparing old photos of the theater, Fields said the only elements of design they could be sure were original in the 108-year-old theater were the signs above the men’s and women’s restrooms and pointing the way to the balcony in the mezzanine.

“They were clearly, clearly an Art Deco style and Art Deco type face, with the lines and combination of glass and burnished metal,” he said. “So we used that look to kind of set the tone for all of the renovation work that we did.”

The glass doors leading from the main lobby into the seating are now reeded glass rather than clear crystal. The ends of seat rows feature a stylized sunburst standing on a column of lines. The trim work on the new draperies, arches and side boxes also are art deco.

Fields said he was puzzled to discovered that Art Deco was starting to be used in France, but not yet in America in 1913, when the Playhouse was built. Then he realized that the du Pont family was French, frequently visited and would have been aware of the trends.

The design style didn’t catch on widely until the Paris Exhibition in 1925 and didn’t show up in the U.S. until the 1930s, he said. The Chrysler Building and the Empire State Building  in New York are both considered premiere examples of Art Deco design.

“This is just my own kind of amateur interpretation here. I haven’t checked this with anybody, but it seems to me that in 1913 to use art deco would have put this the design of the Playhouse on the cutting edge instead of kind of following the trend because the previous interior design style was Beaux Art,” he said. “I just think it’s really funny that in this theater we are renovating in 2021 we have invoked this style that was cutting edge in 1913.” 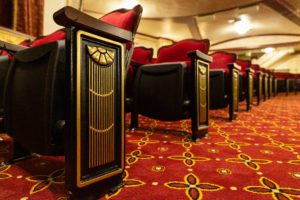 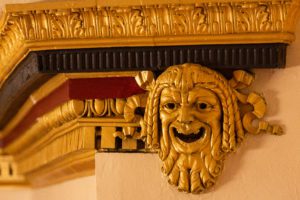 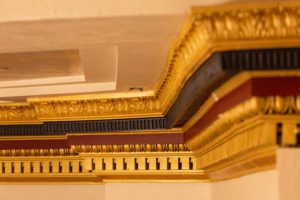 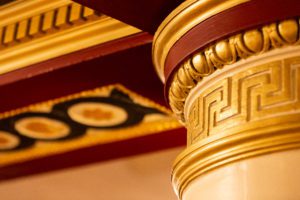 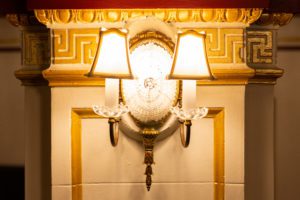 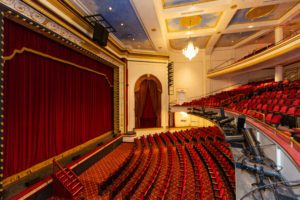 The Playhouse was said to have been built by 100 men in 150 working days and at one point had the largest singular steel beams ever made to top off the proscenium arch. It previously had opened in 1971 as the home for the Grand Lodge of the Masons.

Before COVID-19 hit, the Playhouse was known as the country’s longest continuously operating Broadway touring house.

And while it has welcomed all kinds of celebrities, the growing size of musicals have knocked the theater off touring lists for shows with multiple huge sets, such as “Wicked” or “The Book of Mormon.”

“The average Broadway touring musical has only gotten bigger in recent years, and the expansion of The Playhouse’s loading dock door will allow us to attract larger touring performances than previously possible,” Fields said.

While the Grand was working its magic, Hotel du Pont owner Buccini/Pollin Group built a new bar and seating lounge adjacent to The Playhouse entry now will be used for theater concessions. That will help alleviate the crush created by patrons who have had to push through crowds bound by the box office on one side and a lobby bar on the other.

The huge posters of old shows have been taken down and will be archived, but new displays — some electronic and some traditional — will grace the walls.

Andy Truscott, associate director of marketing at The Grand, said that show sales at both the Grand and the Playhouse have been strong, but overall ticket purchases are coming later than they did before COVID hit.

“Patrons are waiting until it gets closer to shows to buy,” he said.

As a result, lots of great seats remain for “Waitress” now, with theater management expecting the biggest sales to come next week as the opening day approaches. Attendees will be required to prove vaccination or a recent negative COVID-19 test, ad they must wear a mask in the theater.

“Waitress” is one of four Broadway musicals in the Playhouse’s 2021-2022 season, The Jukebox musical “Summer” featured the music of disco queen Donna Summer will run in December, followed by the 25th Anniversary Tour of “Riverdance.” The season ends with “Fiddler on the Roof” in June. Shows may continue to be added throughout the year.

Subscriptions can be purchased by calling 302-652-5577 or by going to BroadwayInWilmington.org.