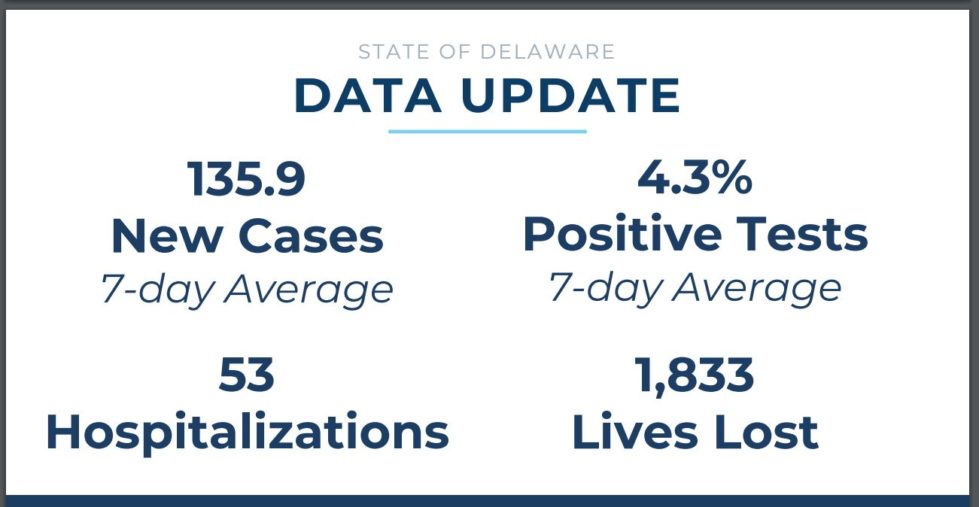 As the number of COVID-19 cases rise dramatically, Delaware officials on Thursday asked the unvaccinated to be immunized to protect themselves and others.

Gov. John Carney said he is considering requiring state employees to be vaccinated and mulling options to implement mandatory face masks in schools.

Carney and Rattay held a public briefing on COVID-19 in Delaware. The Delta variant has pushed Delaware’s new daily cases from 20 on June 20, a low point among declines from winter-spring highs, to 135 on Thursday.

The number of new cases had risen 80% in just the last week, Rattay said. Last week, she said, 50% of the positives samples that the state chose to randomly test came back as the Delta variant.

Carney said the state’s main concern about schools is that students 12 and younger are not yet eligible for the vaccine. Masking students could prevent the spread of the infectious disease between students and staff, keeping more children attending in-person classes and allow schools to stay open.

The governor said a decision will be made soon.

Rattay predicted that children 12 and under could become eligible for the vaccine between September and December of this year.

The officials said a state employee vaccination mandate would cover workers in jobs where contact with the unvaccinated is likely, such as state correction facilities.

The state officials talked about how there’s a huge disparity in vaccination rates between those older than 65 and those who are younger. Not enough young adults are getting vaccinated, but that’s who is ending up in the hospitals now, Carney and Rattay said.

There’s also a disparity between upstate and downstate residents, they said.

Western Sussex County in particular is an area of concern as Harrington, Greenwood, Bridgeville, Seaford, Laurel, Lincoln and Georgetown all match the current requirements of 100 cases per 100,000 or a 10% positivity rate with at least five cases to be named an official area of concern.

Rattay said that people who choose to not get the vaccine still have a responsibility, and that’s to mask up and get tested at least once a week.

“What would be ideal for all of us in Delaware and across states is to have a consistent approach,” Rattay said. “ That doesn’t look like it’s shaping up to be right yet.”

“That being said I don’t think any of us will be surprised if or when booster shots come around,” Rattay said. “Especially given the mutating strains in the community, it is likely that we will see a booster in the not so distance future.  While we don’t know when that will happen, we are planning for it to ensure that as soon as it does happen, Delawareans have access to a booster shot.”

Milford Lady Bug Festival canceled because people can’t social distance
Registration for phase 1B opens Wednesday on new state site; focus on 65 and up
Duren taking his talents to Memphis
Long-time Delmar coach wants to be remembered as 'nice guy who listened'