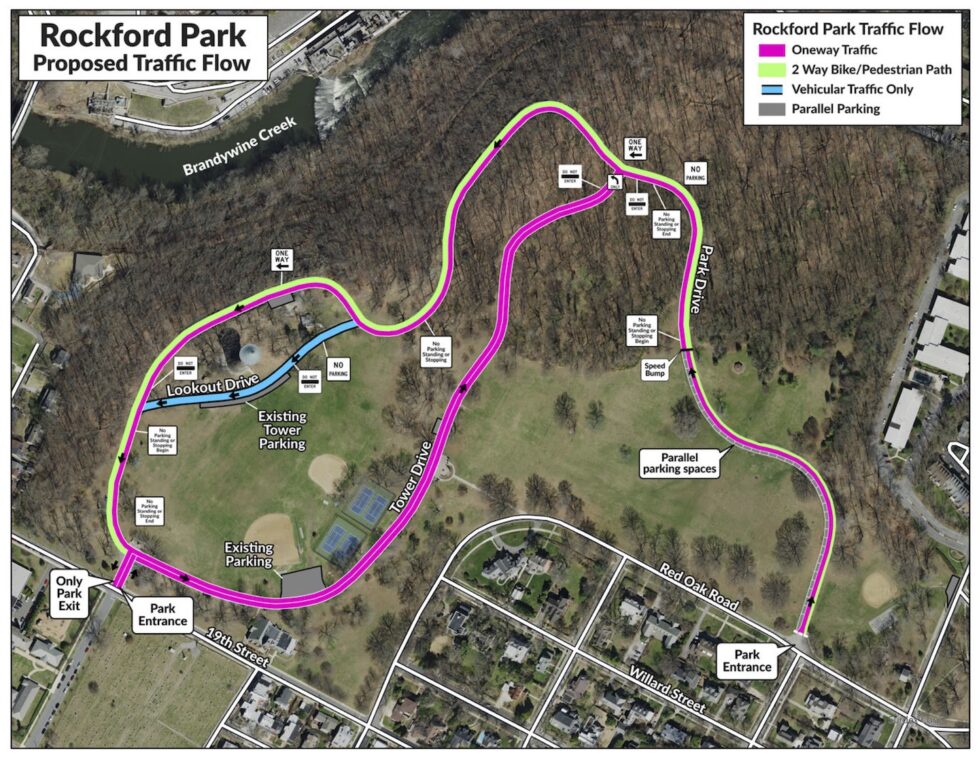 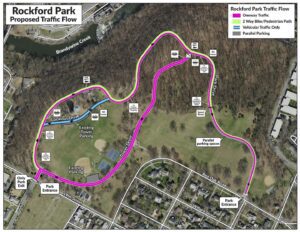 A new traffic plan is proposed for Rockford Park in Wilmington. (Delaware Department of Natural Resources and Environmental Control)

One exit, two entrances and three one-way streets are planned for Rockford Park in Wilmington.

And the 133-year-old park is getting its first designated path for pedestrians and bicyclists.

“The goal of this project is to address, and virtually eliminate, any high risk for a pedestrian accident through the section of Park Drive between Red Oak Road and the Tower Drive intersection,” said Michael J. Globetti, media relations manager for the Delaware Department of Natural Resources and Environmental Control, which includes state parks.

The proposal uses space now taken by the lane going the other way for about 35 more parking spaces near the dog run and for that dedicated pedestrian and bike lane.

“We’re behind them 100%,” said Leslie Hubbard, executive director of Friends of Wilmington Parks. “We’re behind the state parks’ efforts to make it safer for all of us.”

Reception elsewhere, however, was not 100%, judging by posts on Nextdoor.com that followed a recent Highlands Community Association meeting that discussed the plan.

“A thoughtful email can save historic Rockford Park from unnecessary and unsolicited improvements and preserve the natural beauty of the park,” Lisa Hemphill wrote in her opening post.

The proposal was developed by DNREC, with input by the Delaware Department of Transportation and approval by Wilmington, Globetti said.

In the proposal, one entrance would be at Park Drive and Red Oak Road, on the eastern side of the Park. Park Drive would then curve around, one way, to the exit on 19th Street.

“The new traffic pattern seems like a good thing,” Dan McAllister, who lives nearby, wrote on Nextdoor.

OF INTEREST: Learning Collab agreement to be signed Tuesday

For large events, such as the Wilmington Flower Market, park rangers will control traffic as they see fit, which may mean vehicles temporarily permitted to exit on Red Oak Road, Globetti said.

The proposal goes back to a 2018 review of park needs. The new traffic pattern was proposed in 2020, when the pandemic increased park use, Globetti said, and it’s been revised several times to reduce the visual impact to the park, home to the iconic water tower.

“Why is this even needed??” Steve Crifasi wrote on Nextdoor. “We’ve lived in the area for 37 years and never felt that there was an urgent need to restrict traffic in the park.

“I know it’s a state park but I would think that the City officials and our councilmen would have more say on this once they hear what the residents who live nearby and actually use the park.”

“Our Public Works Commissioner supports the Rockford Park plan because of its vehicular and pedestrian safety features,” Wilmington Mayor Mike Purzycki said. “I know there are still concerns from the public who live in the area and I want to make sure those concerns are heard before I pass judgement on this. The outcome could be affected, but let’s see where we end up on this.”

“I’m closely following the issue and working to bring about a resolution that’s best for the neighborhood,” said Nathan R. Field, the city councilman whose district includes the park.