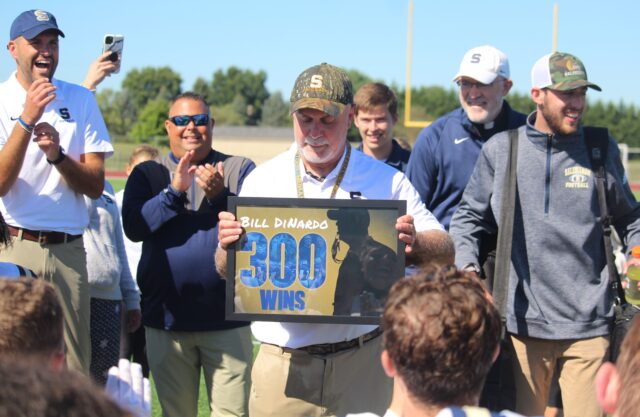 Coach Bill DiNardo receives a plaque after winning his 300th career game, photo courtesy of Mike Lang of the Dialog

Salesianum School Football Coach Bill DiNardo reached the 300-win milestone when his team defeated St. Georges 16-14 in a Sept. 25 thriller that came down to a last minute field goal.

He became the second coach in Delaware High School football history to do that, joining Coach Bob Tattersall Sr. from Wilmington Friends with 300 career wins.

He started the season needing two wins to get to 300, and his 19th season is going well so far, with three wins and one loss.

During his career, he’s led his teams to 26 playoff appearances and won the state title seven times.

I have been incredibly blessed to be able to do something I love for 37-seven years,” he told Delawareonlinecom. “This is a tribute to all the guys who have played for me and battled for me at Caravel, Middletow and of course, Salesianum.

“Their heart, their dedication, their performances created this magic number.”