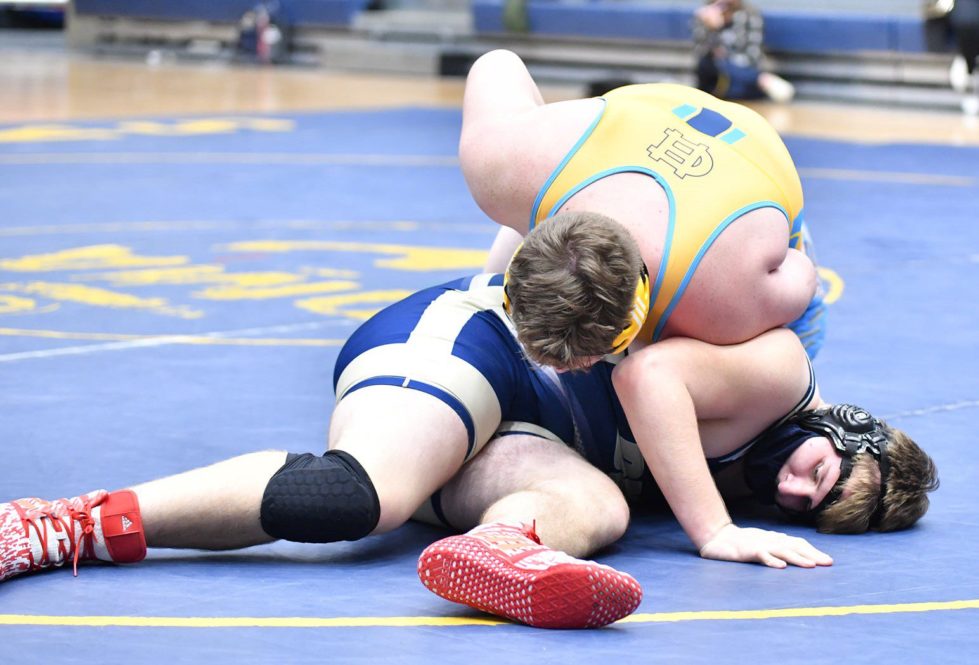 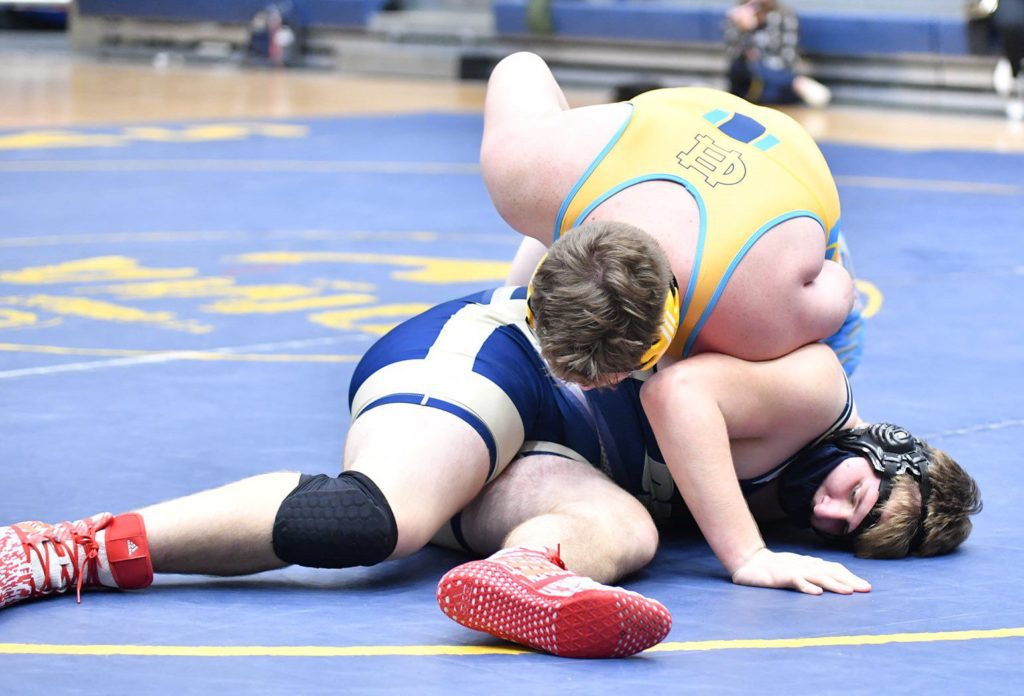 Wilmington – In wrestling sometimes it comes down to the big man doing big man things. Cape Henlopen’s big man Lucas Ruppert did just that as the state’s top ranked 285 pounder securing a pin in 1:54 over number three ranked Cael DiNigris.

Ruppert’s win put the match out of reach as Cape Henlopen defeated Delaware Military Academy 39-27 in a non-conference match on Friday night.

“I knew we needed a pin, we had some guys out of the lineup and we threw some others in. They did their job so I had to go out and do mine,” Ruppert said.

The Vikings started off the match with Holt Baker winning a 7-3 decision over Alyssa Mahan at 120 pounds. Josh Wright followed with a pin at 126 pounds giving Cape Henlopen 9-0 lead to begin the dual.

The dual meet featured several intriguing matchups including Cape Henlopen’s #4 ranked (at 125 pounds) Josh Alveres moving up to meet #3 ranked Daniel Williams at 132 pounds. Williams scored a quick takedown and recorded a pin at 1:17. Ryan Delcollo followed with a 13-8 decision over Braydon Cole at 138 pounds as the Seahawks tied the match 9-9.

Cape Henlopen then reeled off four straight victories to stretch their lead to 26-9.

The Vikings number one ranked (145) Mikey Frederick bumped up to 152 pounds where he and number sixth ranked Luke Spoor locked up in a battle that kept the fans attention the entire match.

Frederick took a 2-1 lead with an early takedown in the first period. Spoor traded a pair of escapes to another Frederick takedown increasing Fredericks lead to 4-3 at the end of the second period.

Frederick escaped and scored another takedown early in the third period to build a 7-3 lead then went up 9-4 with another takedown midway through the period. Spoor was able to escape and then scored a takedown with 15 seconds left in the match as Frederick won a 9-7 decision.

J. Fritchman recorded a pin at 160 pounds followed by Carson Kammerer with a 14-5 major decision at 170 pounds.

The Seahawks inserted Malcom Roy into the lineup at 182 pounds where he recorded a pin in 1:10 cutting the score to 26-15.

At 195 pounds fourth ranked Alex Taylor of Cape Henlopen showed some impressive wrestling on his feet to win a 12-4 major decision over Hayden Moaney who is ranked number three at 182 pounds.

The Seahawks Tyler August pinned Sean Costello in 4:19 at 220 pounds before Ruppert clinched the dual meet victory for the Vikings at 285 pounds.

Trailing 36-21 Delaware Military’s Gavin Mundy recorded a pin over Jacob Goodsell in 1:03 cutting the score to 36-27.

Cape Henlopen’s Max Meadows ended the night with a 14-8 decision over Matt Avery.

Cape Henlopen improves to 6-1 with a busy week coming up. The Vikings will travel to Sussex Tech on Monday, host Sussex Central on Wednesday followed by back to back matches at Laurel on Friday before hosting Dover on Saturday.

Delaware Military dropped to 9-3 on the season and will travel to Caesar Rodney on Monday, host Salesianum on Wednesday and cap off the week at Conrad on Friday. 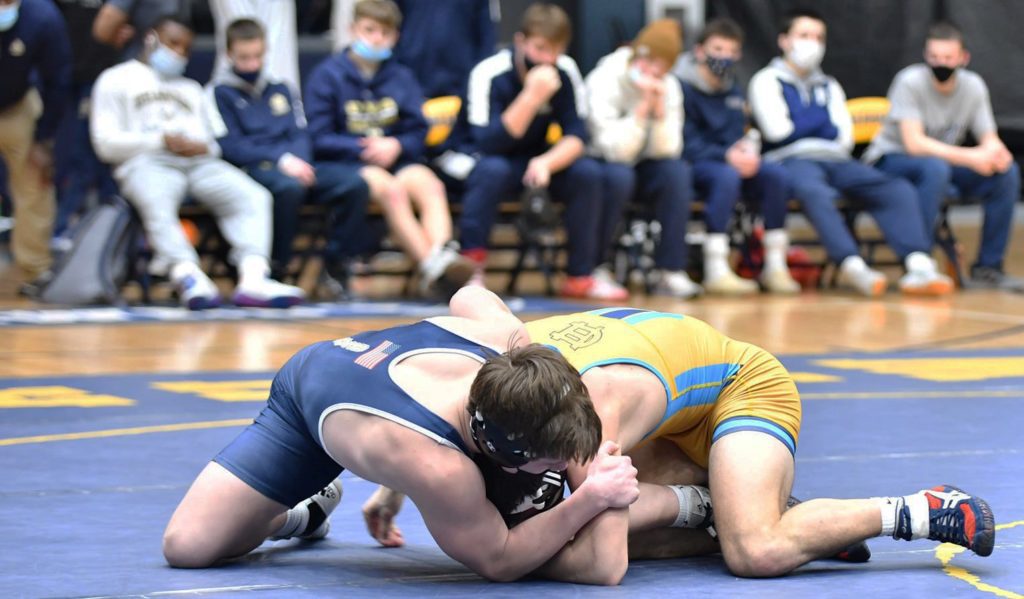 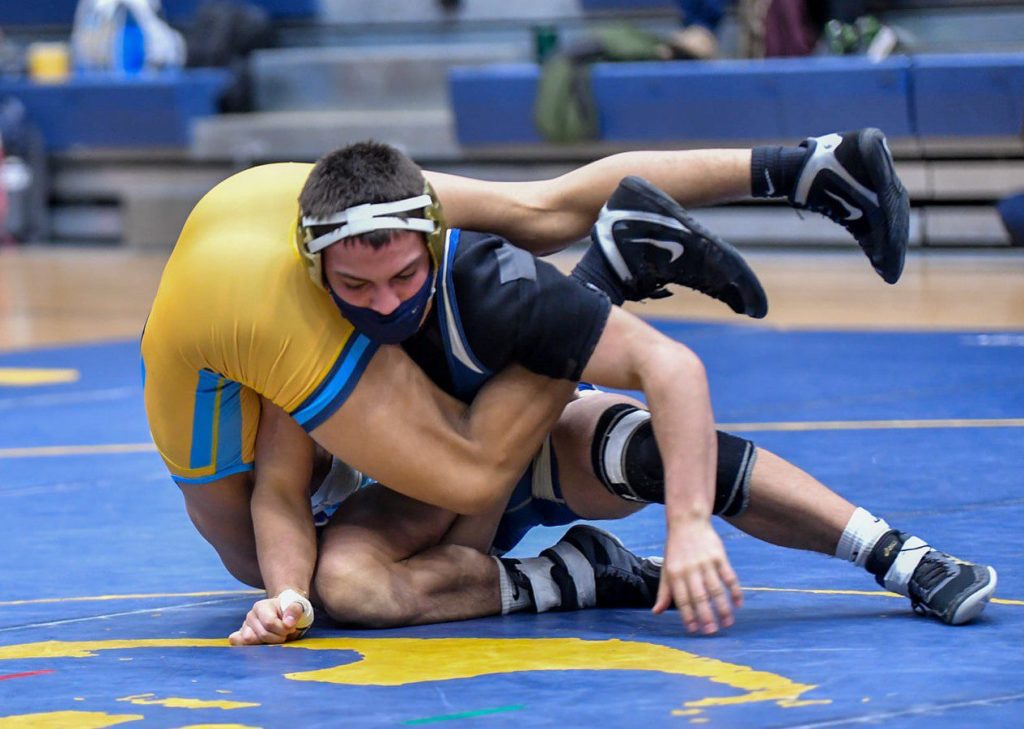