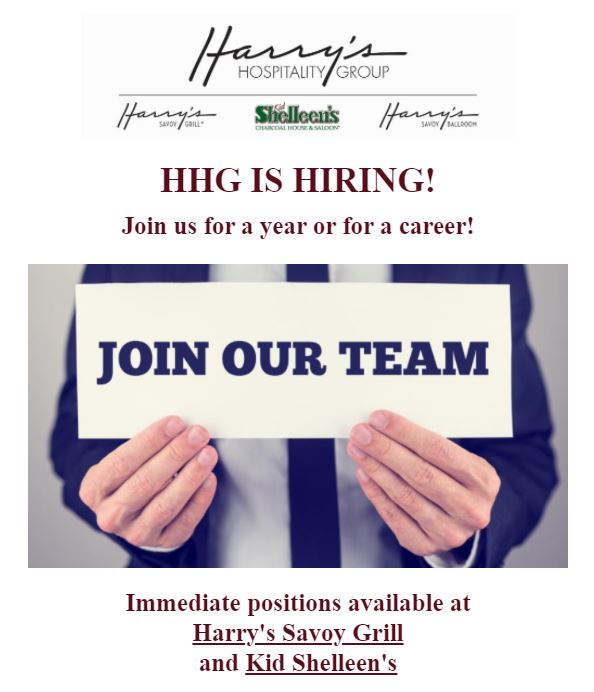 Harry’s Hospitality has been running ads inviting people to work for them for a bit, or a lifetime.

Jeff Hammer, who runs five Delaware beach restaurants, has been running a help-wanted ad in Bethany Beach for more than a month.

He’s had two applicants in that time.

Hammer and other restaurateurs say they’ve seen no rise in applications since the state in July required people receiving unemployment to prove they were looking for jobs or after the extra federal COVID-19 payments ended on Labor Day.

Coupled with that is the loss of seasonal help — largely high school and college students and teachers —as they returned to classes and preseason practices for sports teams, bands, cheerleading and more.

“The next six months are going to be really telling,” said Dogfish Head Hospitality GM Ryan Schwamberger. “I think we lost a lot of people out of our industry that, when we were forced to shut down for so long, found jobs and career paths in other industries and may never come back, or have no desire to come back to hospitality.”

He’s hoping the next six months will bring in a new group of workers.

“Really hoping for it,” he said.

They say they’ve raised wages substantially, but still have trouble hiring, particularly for front-of-house jobs such as serving staff, bussers, bartenders and hosts, which makes handling the crowds difficult.

“I started out hostesses this summer anywhere from $14 to $16 an hour that were 14 years old,” Hammer said. “Our busboys and food runners start out anywhere from $9 to $11 an hour, plus tips.” 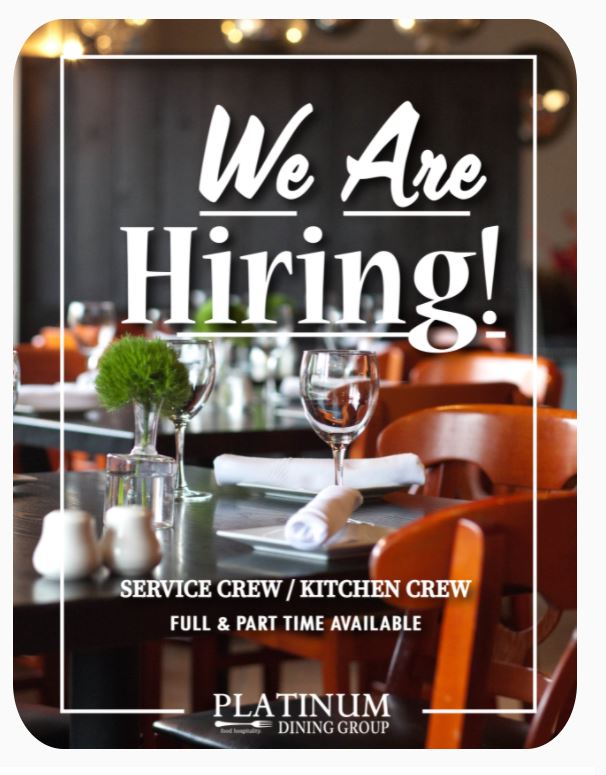 Carl Giorigi of Platinum Dining hopes students returning to UD, other schools will apply for jobs at his restaurants.

People who have been working there for a few years and are making $18 an hour see newbies coming in at $16 and want a raise, he said.

“How many restaurants have you gone to that were closed during the week in the middle of the summer?” Hammer asks. “There were places in Ocean City that didn’t open up for lunch at all. A lot of restaurants in Rehoboth Beach were closed for the day. In Bethany Beach on a Tuesday night, there were seven restaurants closed because they couldn’t open seven days a week.”

Dogfish Head announced last week that it has reduced hours at both the Dogfish Head Brewpub, which is open seven days, and Dogfish Head’s Chesapeake & Maine, which is closed on Mondays and Tuesdays for the foreseeable future.

Hammer said he’s going to have to close for a day each week at his five beach restaurants — Fins Ale House in Lewes and Bethany Beach, Fins Fish House and Claws Seafood House in Rehoboth Beach and Big Oyster Brewery in Lewes.

Upstate, Platinum Dining has started closing all its six restaurants — Taverna Rustic Italian Restaurant in Newark and Wilmington, Capers & Lemons in Wilmington, Redfire Grill & Steakhouse in Hockessin, Eclipse Bistro in Wilmington, and El Camino Mexican Kitchen in Wilmington — on Sundays and Mondays, at least through Oct. 3.

Decisions to limit hours and close some days is counterintuitive to growing and keeping business, he said.

“We work on such small margins the business model has always been to be open as much as you can,” he said. “You pay rent and mortgages and loan bills 24/7. Whether you’re open or not, they’re due. So the thought process has always been to open two meal periods a day, seven days a week, and that’s what 99% of restaurants out there do.”

As the worker shortage continues, restaurants are also coping with sharp rises in food costs.

He said he blew his top at a government spokesman he heard on television saying that if you exclude chicken, pork and beef, inflation was only 4%.

“How can you exclude chicken,” he said. “Will we not eat any protein?” 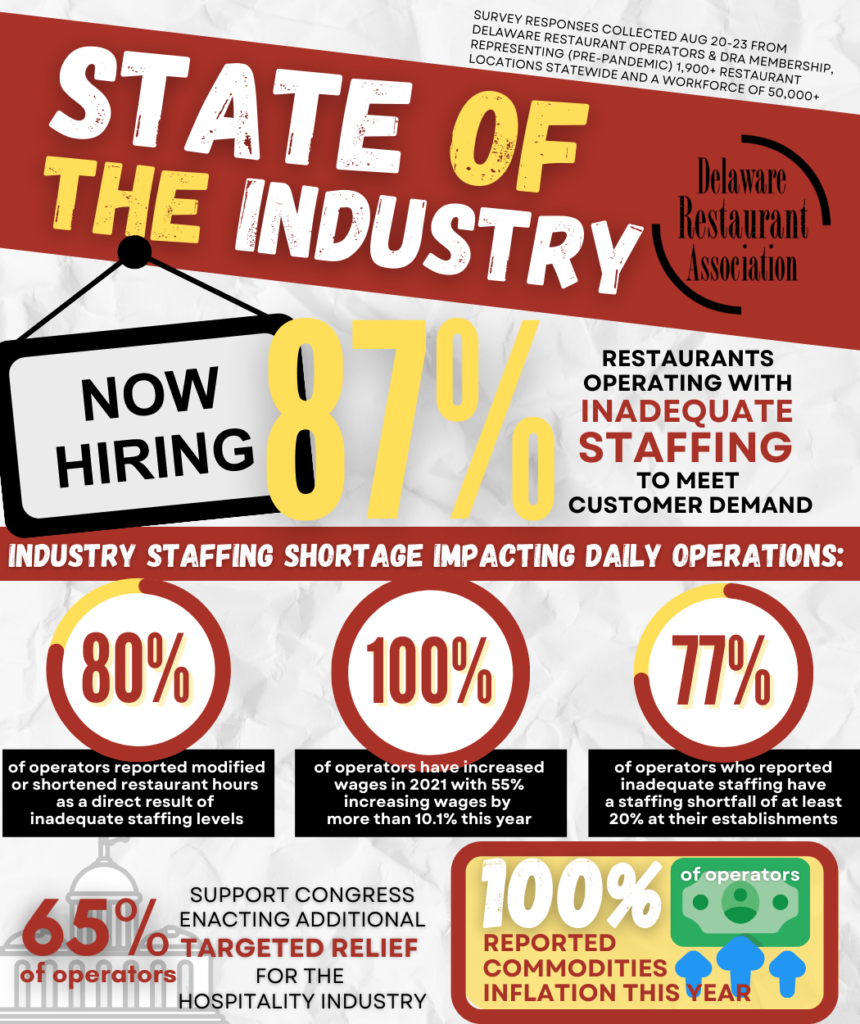 Their plights are reflected in a Delaware Restaurant Association survey taken Aug. 20-23 by 100 restaurant owners or operators representing 300 locations.

Results said the state’s restaurants were operating this year with 6,000 fewer workers amid skyrocketing labor and commodity prices. It showed employment this year remains down 22% compared to 2019.

Among other things, it said:

“This is an industry that requires a ‘full house’ to make a profit,” said Carrie Leishman, CEO of the Delaware association. “These changes indicate declining consumer confidence that will make it more difficult for restaurant owners to maintain their delicate financial stability as we enter a season fraught with the possibility of persistent COVID-19 challenges.”

She is pushing for the Restaurant Revitalization Fund to be replenished by state and federal officials.

“Over $67 million in RRF grants were awarded to Delaware restaurant operators, but this represents only 37% of DE applicants” Leischman said in a press release. “The rest remain in limbo waiting to find out if Congress will act to provide the stability they need to make it through this new pandemic threat and into the future.” 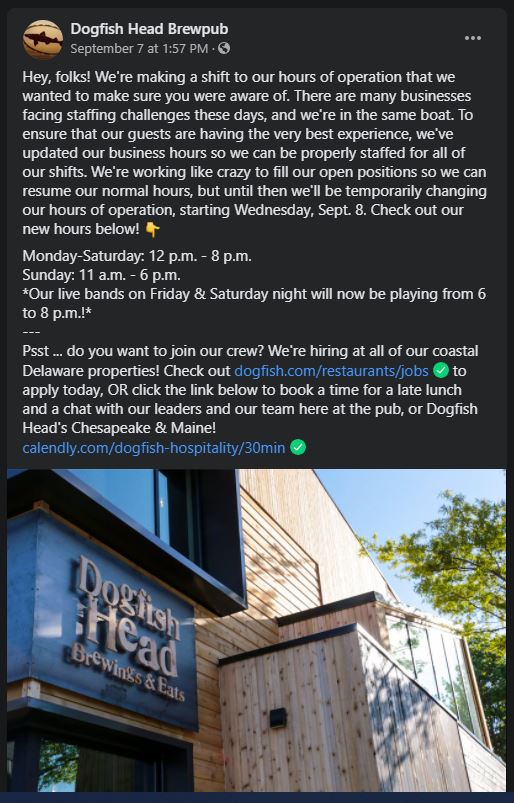 “It’s not just feeding our customers, you know,” he said. “Every day we’re still dealing with COVID and it’s after effects and positive testing and anxieties, and we’re still incredibly short staffed.”

The decision to close for two days was hard, he said.

“On the other hand, having said that, in many many ways it was the easiest decision that I’ve ever had to make because we’re only as strong as our employees and we’re only as good as our happiness of our employees and that was being sorely tested,” Giorigi said. “The restaurants aren’t going anywhere. Delaware’s not going anywhere. And when we get a little bit more people on our team, we won’t have to rely so much on the chefs and the managers covering everything.”

The silver lining of only operating five days a week, he said, is that everyone will be working together. That gives managers and chefs time to mentor those they supervise more closely than they’ve been able to.

He’s hopeful that university students back in town for classes will seek jobs at his restaurants, and at Taverna in Newark last Saturday, that seemed to be the case. There seemed to be several trainee servers.

Hammer isn’t sure where new employees will come from. Many of his summer staff returned to the D.C. area with their parents.

Not many people with children can afford to live on the coast, he said. If you go inland, to a place like Dagsboro, for example, there are a lot of businesses that weren’t there five years ago and people can get jobs closer to home and not have to drive a half hour to a beach.

The staff shortage bumping up against COVID-19 creates other problems for restaurants.

Dogfish Head, for example, always closed the day after Labor Day and took the staff to Jungle Jim’s amusement park. This year, however, Schwamberger said management didn’t feel good about doing that because the Delta variant keeps spreading.

They gave all the workers off and had drawings for gift cards and other prizes, but it wasn’t the same, he said.

Even with the number of Delta cases rising — on Thursday Delaware saw 475 new COVID-19 cases, over a seven-day average — Giorigi said he is not a fan of government-mandated requirements of venues to require proof of vaccination to enter, like the one in New York City.

The virus is here to stay, he said.

“I think we understand that we need to learn to live with it and work through it,” he said. “To continue to add more and more restrictions and regulations that will literally handcuff businesses across this country will be a challenge, if not devastating.”