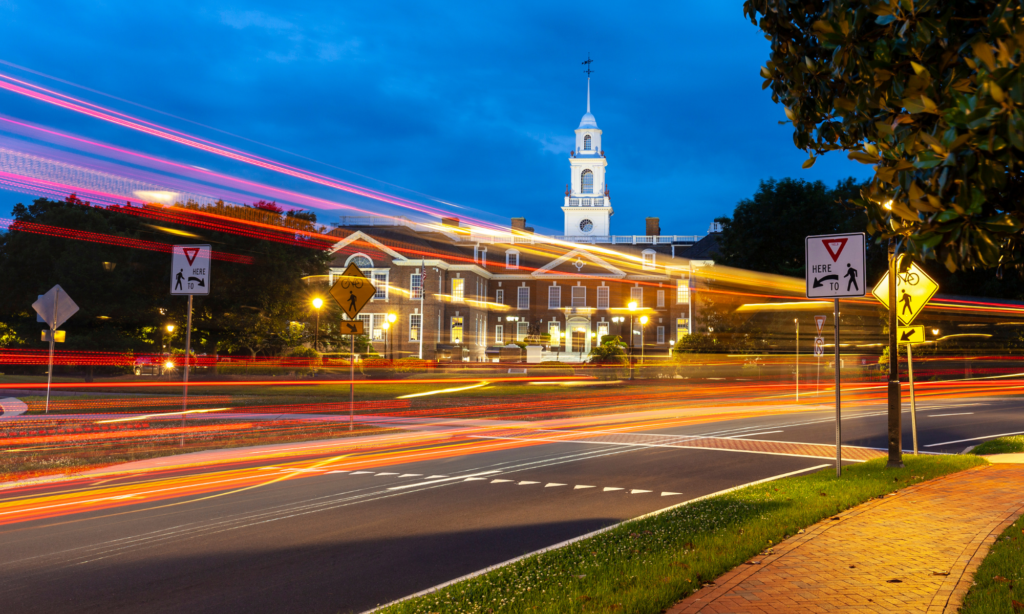 Now, the clock is ticking toward the General Assembly’s self-imposed Nov. 8 deadline to finalize the maps that will define Delaware’s House and Senate districts for the next decade.

Despite the majority caucuses’ efforts to assure Delawareans that the delayed process would be fair, open and transparent, some say it has been anything but.

Claire Snyder-Hall, director of open-government group Common Cause of Delaware, thanked the Democratic leadership for holding one public hearing so that community members could testify for two minutes each but said the people of Delaware deserve more opportunities to have meaningful input into the process.

Snyder-Hall’s testimony effectively summarized the concerns of the majority of the night’s twelve speakers.

“Redistricting is a vitally important process because it will affect the ability of communities to have their voices heard in Dover for the next ten years and that will, in turn, affect the decisions that are made about a wide range of policy issues that have material effects on people’s lives,” Snyder-Hall said during the hearing’s public comment period. “The public has been given only three business days to evaluate the proposed House maps and less than a week total.”

She said even as a paid staff member with an advocacy group, she’s scrambled to get a clear understanding of the impacts the new district maps will have on communities.

“I can only imagine how challenging it would be for everyday voters to get any sense of what the new lines mean,” Snyder-Hall said.

House Republican Caucus spokesman Joe Fulgham said that Republicans are largely on board with the proposed maps, but that there was little opportunity for them to provide input.

“It was not an inclusive process,” Fulgham said. “To the Speaker’s credit, he did reach out to our members initially, early on, but not in the actual drafting of the maps.”

He said Republican leaders were only able to review the maps about 24 hours prior to their public release.

Common Cause of Delaware’s concerns

Snyder-Hall said there are a number of problems with the proposed maps, including city-splitting and edge incumbents.

City-splitting refers to municipalities that are divided amongst districts. She noted that Wilmington is split six times, Newark three times and Dover four times in the House maps.

“Even the tiny town of Lewes is split in two,” Snyder-Hall said.

Draft senate maps indicate that, if adopted, Wilmington will be split once, Newark three times and Dover twice.

Edge incumbents refer to currently seated representatives who reside right on the very edge of their districts.

Snyder-Hall believes that proposed districts may have been drawn to protect incumbents, which would violate a clause of the Delaware Constitution that prohibits drawing maps to unduly favor a person.

“Redistricting processes should result in districts that ensure every Delawarian has equal opportunity to elect a candidate of their choice,” she said. “Drawing districts for the purpose of including an incumbent’s home address is in direct contravention of this principle.”

Could the General Assembly push back the deadline?

Having aired their grievances, Common Cause of Delaware called on the General Assembly to delay their Nov. 8 deadline to allow the public more time to review and comment on the proposals.

The deadline exists because of a Delaware law that requires candidates to reside within their districts for at least one year prior to their election to the General Assembly. The next general election will be held on Nov. 8, 2022, and every House and Senate seat will be on the ballot.

“A reasonable interpretation of the language in the Delaware Constitution is that candidates need to reside in the geographic area composing the district,” Snyder-Hall said. “Accordingly, if candidates plan to run for seats in the districts in which they live, they will have been there for well over a year, regardless of when this process finishes and final lines and district numbers are determined.”

She said it’s troubling that the reason this process would be fast-tracked may be to allow people to move so they can run for office and asked that the General Assembly move their deadline to the end of the year.

That, in Snyder-Hall’s view, would allow a more thorough analysis to be conducted and give the voters time to weigh in.

But Fulgham said such a move “is not even on the table.”

“The schedule is set by the majority and to the best of our knowledge, the majority has every intention of enacting whatever finished plans come out of this process, no later than Nov. 8,” he said. “Probably earlier than that.”

Fulgham doesn’t fault Democratic leaders for the expedited process. The blame falls squarely on the lap of the U.S. Census Bureau.

Their final census data should have been published by the end of April, but House leaders didn’t receive official figures until Mid-September, and weeks after with accurate prison-population data.

“A lot of this compressed timeline has been forced on us, both Republicans and Democrats alike, by existing state law and by the federal government’s failure to deliver the census results,” Fulgham said.

One issue of contention during the hearing was the redrawing of House District 21. Under the Democrats’ proposal, incumbent Republican Rep. Mike Ramone would be drawn out of his district and into incumbent Democratic Rep. Paul Baumbach’s House District 23.

Such a move would require Ramone and Baumbach to face off against each other in the next election — if they both choose to stay in office.

Short said both parties are in “general agreement” with regard to the proposed maps but that he objects to the effective proposal to oust Ramone from the House.

He said doing so would unnecessarily pair incumbents in the same district and “override the choices of the electorate.”

Short said instead, Democratic leadership could consider the GOP’s suggested maps, noting that in their proposal both Baumbach and Ramone would remain in their current districts while still meeting all other requirements.

“We’re not trying to politicize this at all,” Short said. “We’re trying to come to a conclusion that we think satisfies everybody and is fair, just and provides equality and fairness in this process.”

House Speaker Pete Schwartzkopf responded that they would “take another look at it.”

Fulgham indicated that if that problem is able to be resolved, “there would be fairly broad support in our caucus for those maps, providing Rep. Ramone is kept in his district.”

Efforts to reach Ramone for comment Tuesday were unsuccessful.

One of Ramone’s constituents, Cheryl McDonough, said the “18,000 people who live in the 21st District are totally having our choice of representation taken away from us.”

“We’re very very hurt that our legislature would pick out one representative that each year, Democrats run against, and they don’t win because Democrats in our district along with Republicans and independents, respect and love the representation that we have,” McDonough said. “That’s why he stays.”

She said she believes Democrats are trying to map Ramone out of his current district because they can’t beat him at the ballot box.

“You can’t beat somebody in an election so you just go ahead and take the seat away from them,” McDonough said. “That’s not fair to us. Let the elections decide who represents us — not the General Assembly.”