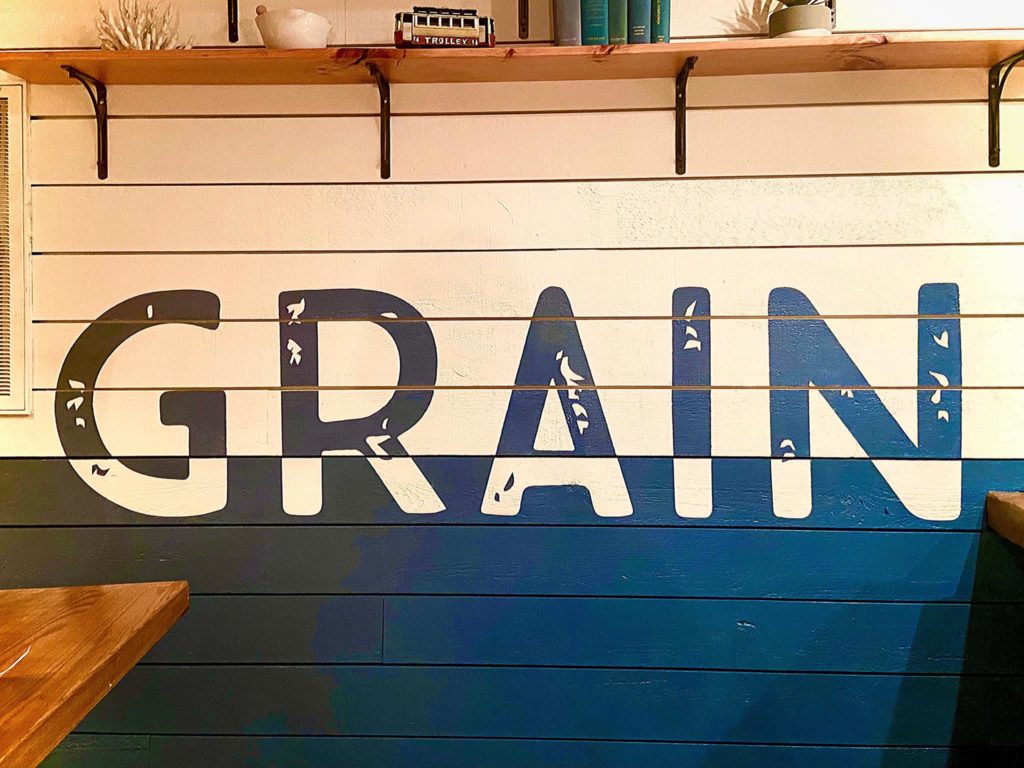 The opening of Grain Craft Bar + Kitchen on Wednesday, May 11, is another feather in Trolley Square’s party hat.

The stretch between N. DuPont Street and N. Scott Street is a hipster hive that can hold its own against most fun hubs in the state.

But it wasn’t always that way. Here’s a look at what is and what was in this see-and-be-seen center.

The slender Trolley Square site is the fifth Grain location in OMG Hospitality’s portfolio, and it’s by far the smallest — two people can crowd the kitchen. Consequently, the menu is limited compared to the other locations. You’ll mostly find noshes, sandwiches and a few salads.

You won’t lack beverage options or places to enjoy them. There are plenty of barstools in the indoor and outdoor spaces, and a seat-less bar runs down an outside wall.

Big Fish Restaurant Group, the landlord, renovated the building for BarRoja, a taco-centric spot that didn’t survive the pandemic. Or perhaps Big Fish nixed the concept when it opened Taco Grande on the Wilmington Riverfront.

The Trolley location has long appealed to restaurateurs. Legal notices for liquor applications appeared in the newspaper for the Forty Acres Spaghetti House (1946), Jillian’s Restaurant (1982) and Peppers Restaurant (1987).

In 1964, a classified ad welcomed patrons to the Champagne Lounge, also at that address.

But most locals call the building “Scratch Magoo’s old space,” and with good reason. The watering hole opened in 1989 and closed in 2018.

The founding company, the Shemp Restaurant Group, also owned Tyler Fitzgerald’s in Pike Cree, Thurston’s Pub in Bear and several other restaurants. Partner Scott Martin became the sole owner in 2013 until he sold to Big Fish.

The culinary couple, who opened the sleek eatery in 2019, also have La Fia and Merchant Bar on Market Street and Hearth Kitchen in Kennett Square.

Martin previously operated the short-lived Old Banks Craft Bistro in the building, an old WSFS branch. In the 1960s, it held the Brandywine Savings and Loan Association, and in the ’20s, you could buy a Spartan radio from a specialty shop.

Now you can spend money — not save it — on craft cocktails, cheese and charcuterie, cornbread madeleines and birria tacos.

Big Fish Restaurant Group is swimming well in this pond, and it started with the oyster house, which opened in 2016 after the hospitality group purchased Satsuma Asian Kitchen & Bar.

The latest occupant has been so successful that it’s threatened to eclipse the memory of the Del Rose Café, founded in 1962 by Frank Mercante.

Evidently, a raw bar trumps a chopped salad in the 21st century.

Little known fact: In 1910, a “Black Hand” mafia gang tried to kill Peter Terranova, who lived in the house, after the shoemaker failed to meet extortion demands. The bomb, placed at the back door, damaged the building and neighboring homes, but the family got away safely.

Residents rejoiced when Dan Sheridan moved Locale BBQ from Little Italy to Trolley Square, and Sheridan is currently seeking a liquor license to serve beer and bourbon with his brisket.

The restaurant replaced Scrumptious, a breakfast, brunch and frozen yogurt spot that resided here from 2012 to 2021

You may remember that the site was also home to Sandy Hollow Herb Company, a haven for New Age customers seeking alternative therapies.

The Latin-themed eatery sports a casual vibe, but in the 1990s, it was 1717, a bistro with upscale cuisine. Servers wearing all black asked guests if they wanted to start their meal with Champagne.

Before 1717, the Manis family operated The Towne Wharf Restaurant in the space. The building has also housed a travel agency.

With so many cuisines and cocktails available in such a short area, you can take your palate on a trip without leaving the block.