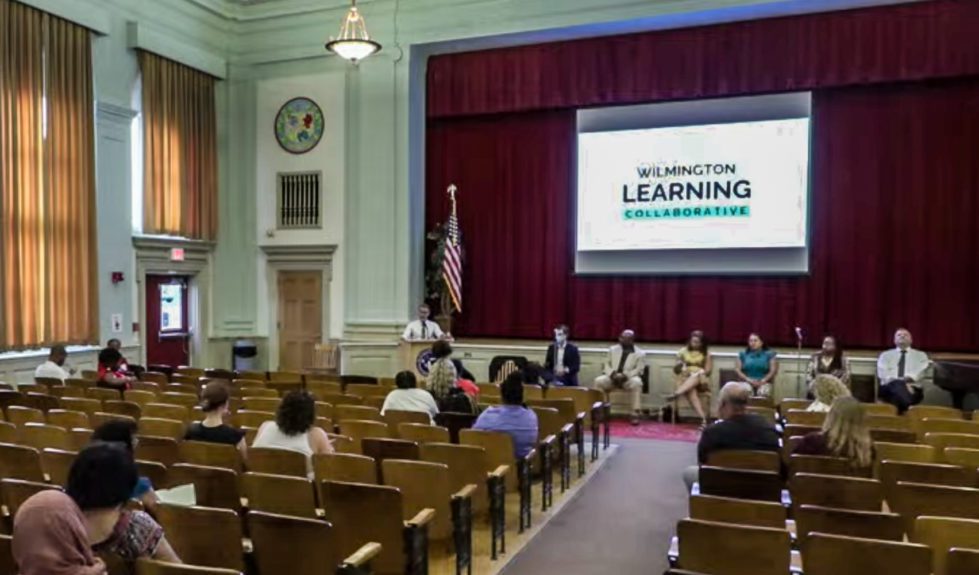 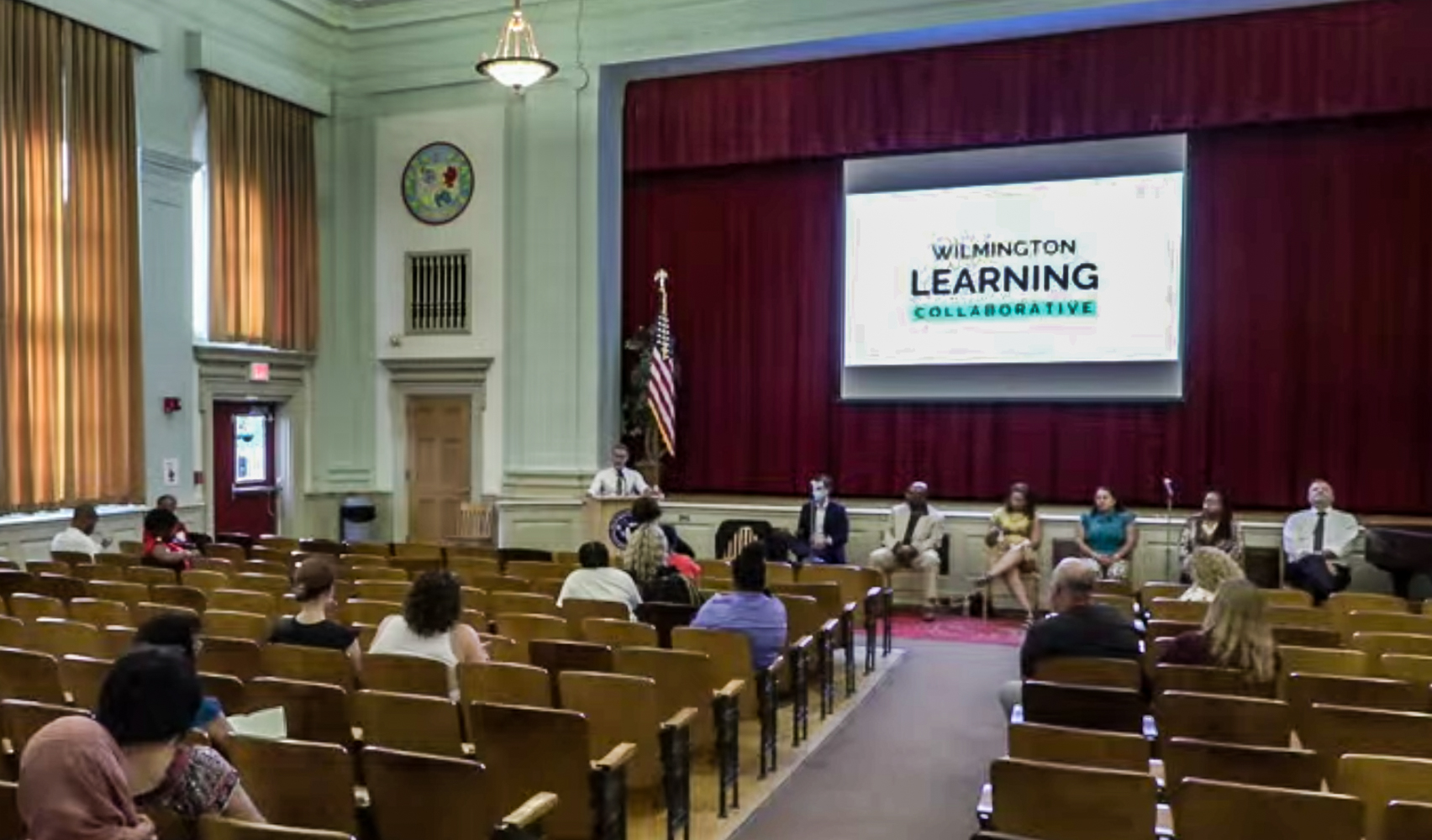 A Wilmington Learning Collaborative official said Tuesday that the boards of the three participating districts may not approve the operating agreement until September.

Jon Sheehan, chief of policy and senior advisor to Gov. John Carney, made the comment while describing how the state expects the project to unfold as it tries to create a new agency to oversee city students in the Red Clay, Brandywine and Christina districts.

All three districts brought up the agreement in their July meetings and all postponed a vote. A Christina board member said it was waiting on a change in the language in the operating agreement.

There was little public discussion at any of the board meetings about the agreement.

Sheehan made his comments during a town hall at Harlan Elementary. That gathering saw questions from the audience, but no questions from board members.

Education Secretary Mark Holodick, Department of Education Director of Equity and Inclusion James Simmons and Sheehan fielded questions from a group of about 20 community members.

Initially imagined more than five years ago, the Wilmington Learning Collaborative is a joint project initiated by Gov. John Carney’s office and the DOEs.

Its focus is improving student outcomes and empowering city students and educators, while keeping families as engaged as possible with their child’s education.

The thrust of the questions seemed to be that whether or not the learning collaborative succeeds, the city of Wilmington needs serious changes.

How will you track the effectiveness of the collaborative across Wilmington schools? What is the timeframe for the initiative? When will it start and when will it end? – Massa Nuni

Sheehan said that the 2022-23 academic year will largely be a planning year.

He said he “hopes” there’s a joint meeting between the three school boards, Brandywine, Christina and Red Clay to help them reach a final version of the draft agreement.

It will include ways to measure the learning collaborative’s success.

The 7 million that we get from funding – I just wanted to know if there’s any requirements on funds being allocated towards staffing versus funds dedicated towards programs? – Unidentified man.

“A principal who may have invested a lot of their additional resources in programs may want to focus on additional staffing instead,” Sheehan responded. “We really want to trust each building to know the staff and the school leader to know what they’ve invested in.”

The state shouldn’t play the role of prescriber, he said, and it’s important for the state and districts to trust each other to make decisions, rather than telling schools how exactly to spend the funding.

How can we put all this together and design a curriculum that’s going to speak to the interests of all students? – Stephen Washington.

“We have to design a curriculum or use a curriculum that students can see themselves in and the things that they’re interested in,” Simmons said.

He said each building should be able to decide their own curriculum based on the demographics, interest, and life experiences of that particular school.

“For us to decide that we should have a common curriculum doesn’t make sense,” Simmons said, “but I think we’ve got to be culturally responsive not only in our curriculum, but in the way we approach and talk to children.”

Holodick said it’s less about the curriculum and more about those teaching it.

“That’s where the resources really go, into professional development, into the people who are going to be utilizing that curriculum,” he said. “You can adopt a curriculum that’s culturally relevant, but then if no one teaches it, what do you really have? Nothing, right? So you have got to invest both in the curriculum and the people.”

While we say it’s a planning year, why not have a plan in place that says “here is the goal to move our children to the reading levels that they need to be in order to be grade-ready and successful this school year? – Gloria Grantham.

She said she “couldn’t sleep tonight” without coming to the town hall and sharing her thoughts.

“Most are reading two years or more behind grade level, which means they are underprepared to do the work that they must do starting in September,” she said. “Our kids are in a crisis.”

Grantham, who became more emotional as she talked, also said that the schools have been “destabilized” and criticized the state for not giving teachers voices, which, along with poor salaries, is why Delaware is losing hundreds of its teachers each year.

Holodick responded, “I would be remiss not to mention that in the year of planning, we really heard directly from the teachers themselves …  What we heard from the teachers was ‘Don’t come in and tell us what to do, allow us time to build what we need to do.’”

Unlike previous plans to improve schools, the learning collaborative includes teachers on the governing council, giving them a platform to express needs and push policies, Holodick said.

He told Grantham that the need to retain and recruit teachers, especially in high-needs schools, is a national problem and one of the biggest obstacles the learning collaborative is trying to tackle.

Carter, who was very emotional, is a counselor at Harlan.

She said she’s felt burned out after the last few years. So many students need mental health services in school, and she can only do so much with the limited resources and mental health professionals her school has.

She said she has had to write more mental health referrals this past year than in her previous seven years as a school counselor and hasn’t been able to meet the needs of all her students.

“If I’m not mentally there, there is no way that you are going to get me to do any type of academics,” she said, describing how students who come to her often feel. “It’s just not working. My brain is closed off.”

Brandywine School Board is set to vote on whether to join the learning collaborative Monday Aug. 15 after board members said in July that they were concerned with financial and obligatory concerns.

Christina’s School Board could vote at its meeting Tuesday, Aug. 16. Red Clay may vote at their Wednesday, Aug. 17 school board meeting.