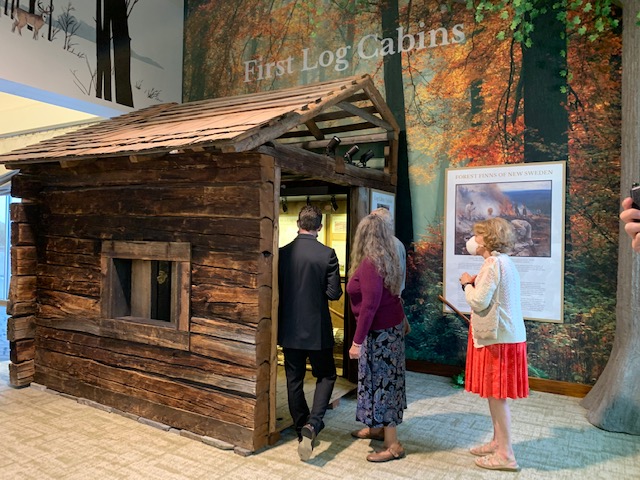 A notched log cabin moved from Idaho is a centerpiece in a new exhibit about why Swedes came to Delaware at the Kalmar Nyckel museum.

Destination Delaware, a compact new exhibit at the Kalmar Nyckel museum in Wilmington, celebrates the founding of New Sweden and the people who made those colonies successful.

Opening Wednesday at the Copeland Maritime Center & Museum on the Christina River, the display includes a notched wood cabin made without nails, an illuminated tapestry showing settlers trading with the Lenapes and a lot of information about what happened when, where and why.

Central to the display is an ax set into a length of tree trunk. Without that tool — and the many others on display — settlers couldn’t have cut down forests to build fires and homes and clear fields for planting.

The new addition came because the museum, focused on sailing Delaware’s tall ship, wanted to tell the story about why the Swedes came to Delaware, said Cathy Parsells, executive director of the Kalmar Nyckel Foundation. It runs the museum, maritime center and ship.

Paid for through a combination of donations and grants, it’s the latest in a series of small additions to the museum. It focuses on a 3/4 size reproduction of the deck of Delaware’s tall ship, but also sports a room full of ship models from around the world, a classroom set up to teach navigation to school children and a room dedicated to the development of the Wilmington riverfront.

The Kalmar Nyckel sailed from Sweden and in 1638 landed at the rocks of what is now Fort Christina in Wilmington, becoming the first permanent European settlement in the Delaware Valley.

Visitors can look through museum windows toward the rocks and the fort, but with trees leafed out, they can’t be seen.

The new fort irked the Dutch, who thought the property was theirs. The Swedes then had a powerful navy and the Dutch were militarily weak, but continued conflicts ended with the Dutch taking over the settlement in 1655.

One of the info panels in the room shows the number of Swedish settlements that followed the founding of Fort Christina, spreading along the Delaware River and its tributaries up into the Philadelphia area. All are considered part of New Sweden.

One of the things that settlers came to the colonies for was to trade for beaver pelts.

The European animals had been hunted to near extinction and their pelts were so valuable that it made a trip across the Atlantic Ocean worth it, said Kyle Parks, assistant director of public programs.

The early settlers made friends with the Lenape, who are memorialized in a stylized graphic above the door that shows hunters seeking deer in a snowy forest. 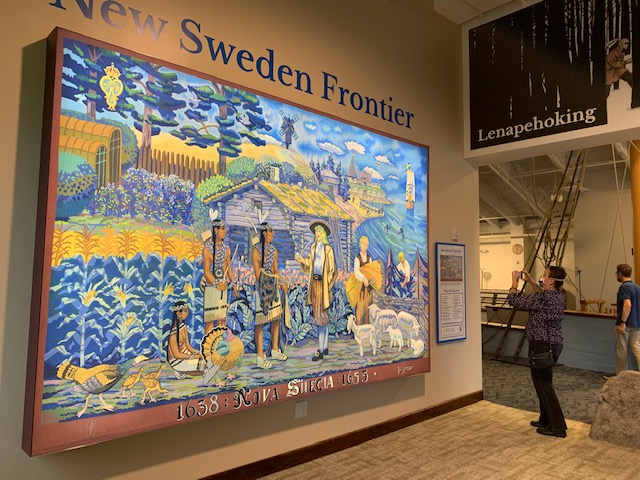 This illuminated New Sweden tapestry is meant to show a typical colony, not a specific one.

The cabin and the illuminated tapestry, which is an enlarged photo of the original tapestry mounted on a lightbox, are the centerpieces of the exhibit.

The light allows visitors to see details that aren’t readily apparent when viewing the original tapestry at the American Swedish Historical Museum in Philadelphia, Parks said.

The tapestry is meant to depict a typical Swedish colony, just a a specific one.

On the right, it shows Swedes ready to trade with the Lenape.

The community butts up to the sea, which has a ship on it and fishermen dumping a rich catch. A worker is shown holding armfuls of wheat. Goats gather nearby. Wheat, goats and metal were two things that Parks said the Lenape liked to trade for.

To the left, fields with abundant growth, trees and more buildings are seen. Two Lenape men stand, one holding a pelt, and a Lenape woman sits bare breasted in front of a corn field and surrounded by animals such as turkeys. The natives traded corn and animals to the Swedes.

Among those whom the Swedes brought to the colonies were the “Forest Finns.” They were Finnish people who worked and lived in the forest. Their jobs were to help clear the woods so the colonies could expand.

The Finns built cabins without nails and helped establish the idea of a log cabin as a common colonial home in North America. 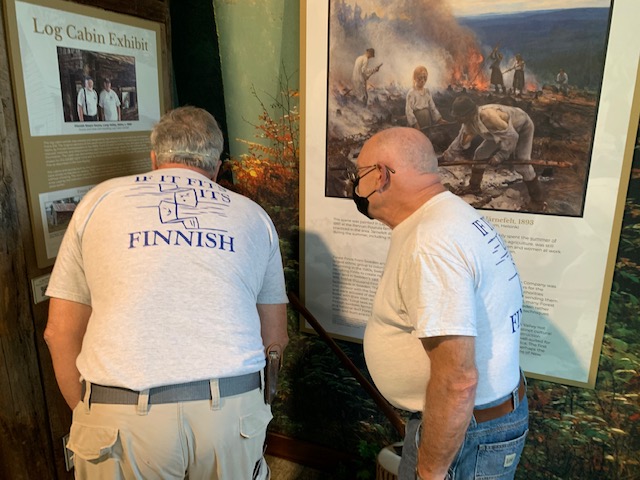 Finnish brothers Frank and Dale Eid examine inform about the log cabin they helped install in the Kalmar Nyckel exhibit.

The cabin now on display was moved from Idaho and installed by two Finns, Frank and Dale Eid. They were visiting on opening night and  wearing T-shirts emblazoned on the back “If it fits, it’s Finnish.”

The interior of the cabin offers a look at how sturdy the Lincoln Log walls were, as well as the tiny space an occupant must have had to deal with.

A glassed-in display shows several kinds of tools that would have been needed to clear forest and build one. Above the display is a step-by-step graphic about the tools a worker would need to turn a tree into a log and then a cabin.

It wasn’t an easy life, Parks said, but New Sweden had a phenomenally high survival rate compared to most new colonies.

“Perhaps it’s because the Swedes and Finns came from a harsh environment  and heavily forested country already,” he said. “In its first year, astonishingly, essentially no one died, which is a very different story than places like Jamestown.”