More than 1,000 people have signed a petition to halt the development of a 1.8-million-square-foot warehouse complex next to The Village of Bayberry North, a residential community in Middletown.

They’re angry because the warehouses will go up in a spot that had been approved as a business park with offices, restaurants and a daycare center. Instead, they’ll end up with four massive distribution centers – and all the traffic that comes with them.

Residents say developers are violating the spirit of the original plans, but New Castle County zoning officials say they’re well within their rights and there’s nothing the county can do.

Bayberry North resident Kevin Caneco started the petition because he fears projects like the one at Scott Run jeopardize the character of his neighborhood.

“This is our first home,” Caneco said. “My wife and I set out to build a life here. We have a six-year-old daughter and we’re here for the long haul. I think of my daughter growing up here and I think, ‘What will this place look like 10 years from now? 20 years from now?’”

The site was approved by New Castle County in 2005 as a business park. It would have had a gross floor area of about 1.8 million square feet divided among numerous different buildings.

That never panned out, and the land sat vacant for years. 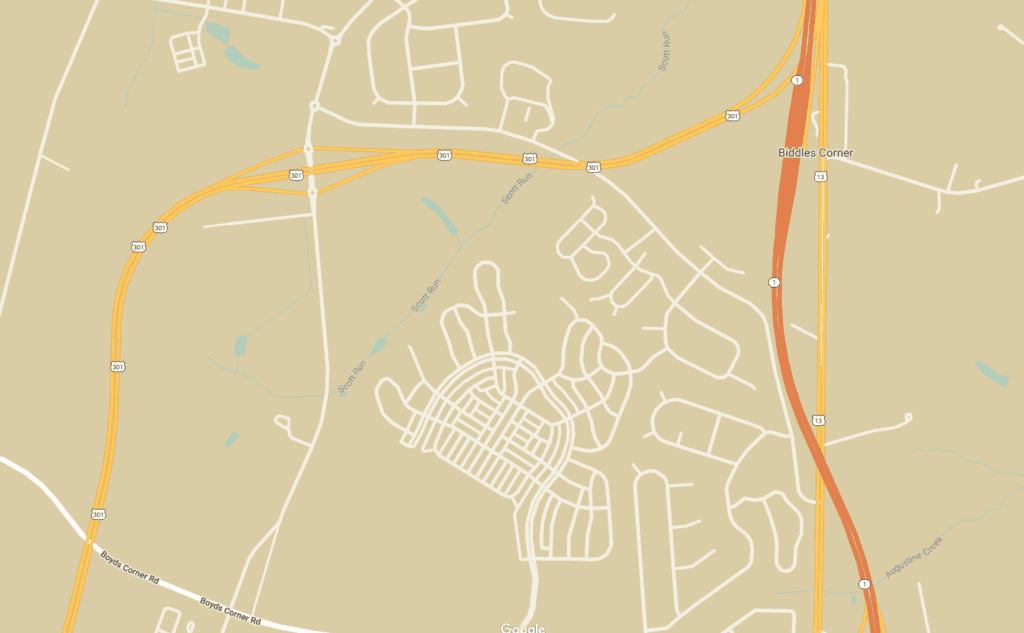 The proposed Scott Run Commerce Center will sit at the corner of U.S. Route 301 and Jamison Corner Road in Middletown.

Now, real estate developer EQT Exeter is planning on taking advantage of the previously approved business park application to build its logistics center without the need to go through public hearings or planning board approval.

EQT Exeter did not respond to requests for comment.

The company is able to build warehouses on the lot because county land-use officials say their development plans only constitute a “minor change” from the previously approved plans.

The lot is zoned for a business park, which most consider to be a collection of office buildings. In New Castle County, though, business park zoning allows for manufacturing, light industrial or warehousing uses, too.

“I think they are wrong,” said Councilman David Carter, who represents the area where the warehouses will be developed.

“The code is very clear in how you define ‘minor changes,’ but for whatever reason, they are trying to kind of ignore that part of the code and do something quite different,” he said. “I don’t know what’s motivating them.”

Section 40.26.260 of the New Castle County Unified Development Code restricts the size of light industrial buildings, such as the proposed warehouses, to 450,000 square feet, unless certain criteria are met.

Such restriction is designed to prevent large buildings from altering the general character of the areas where they’re built.

The code includes exceptions for plans that attempt to limit the view of large buildings, but Carter argues the current proposal shows little to no mitigation efforts.

EQT Exeter will be required to comply with that section of code, they said, and they won’t be permitted to move forward with any plans that would alter the character of the district.

“We won’t record the plan until we’re satisfied with the mitigation steps,” Haggerty said.

Such mitigation steps could include landscaping, architectural designs, facade materials, window treatments, reduced height by setting the ground floor partially below grade, or locating the building topographically so that it is better screened by surrounding buildings.

Hall and Haggerty said they want to work with the residents and the developer to find common ground and sort out what mitigation measures nearby residents would like to see.

What they can’t do, Haggerty said, is outright deny the plan to develop the warehouses.

“Our job is to follow and implement the code,” he said. “The original plan was recorded, and it established a certain amount of gross floor area in the neighborhood of about 1.8 million square feet. Now, somebody coming in and changing and adjusting that has the ability to do that provided the use is acceptable in the zoning district.”

Carter believes Hall is incorrect to categorize the new plan as a minor change from the previously approved business park.

Carter feels it sets a bad precedent that could allow developers in the future to do a “bait and switch,” wherein they submit more palatable plans and than swap them out as minor changes.

Hall said he agrees that the current code is flawed and needs to be updated, but in this case, the gross floor area is equal to or less than the previous application, the traffic patterns haven’t been significantly altered, and other similar properties have also been considered as minor change requests.

Caneco said he wants a public hearing on the matter so residents can voice their concerns.

“We want to have a hearing and ask them the fundamental question, ‘Does this really make sense for the community and the public welfare of the residents in the area,’” he said. “I think they need to do some hard self-reflection about whether that’s smart zoning or not.”

The problem, Hall said, is that holding an official public hearing is not permitted under existing county statutes.

He said he is committed to holding an unofficial public meeting in the coming weeks with residents, which is more than the law requires. The developer has agreed to participate in that meeting.

Hall is also working with council members and county attorneys to draft legislation that, in the future, would require projects like the one at Scott Run to go through an official public hearing.

“If we could have required a public hearing, we would have done it by now, but that’s not what the code directs us to do,” he said. “But it’s still subject to all the rules that the code requires. Some of the people down there are very focused on having a public hearing. Whether there’s a public hearing or not, they still have to meet the requirements of the code.”

Carter said he fears the residents will have only one recourse if they’re unable to stop the development of the warehouse.

“It may be that they have to go to Superior Court and take the county to court and take legal action,” the councilman said. “It really frustrates me a lot in New Castle County, to get the administration to follow the code, they may have to go to court. That means that in New Castle County, you get as much land use justice as you can afford to pay for.”