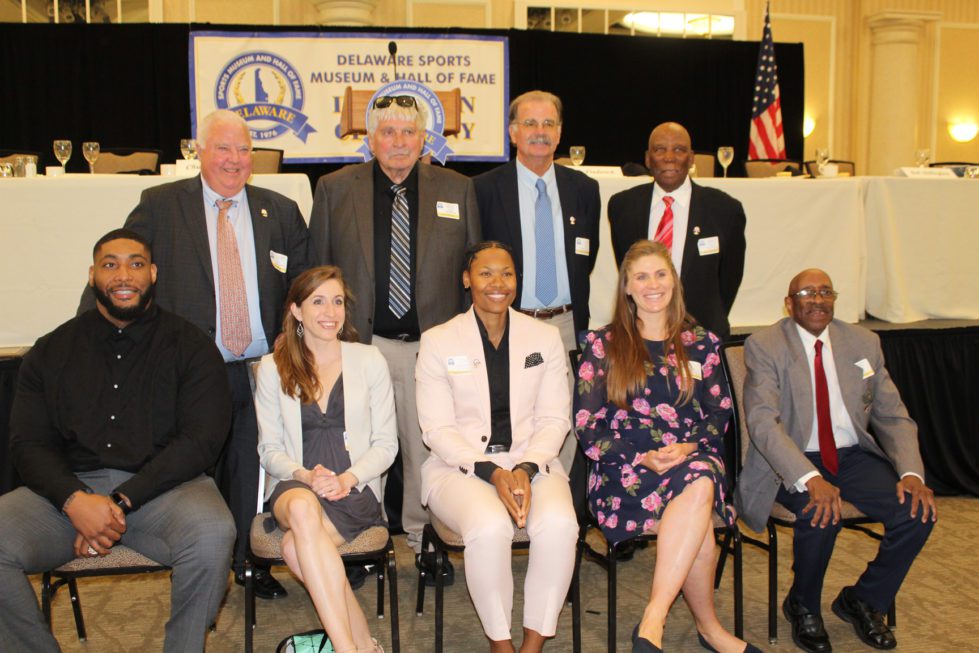 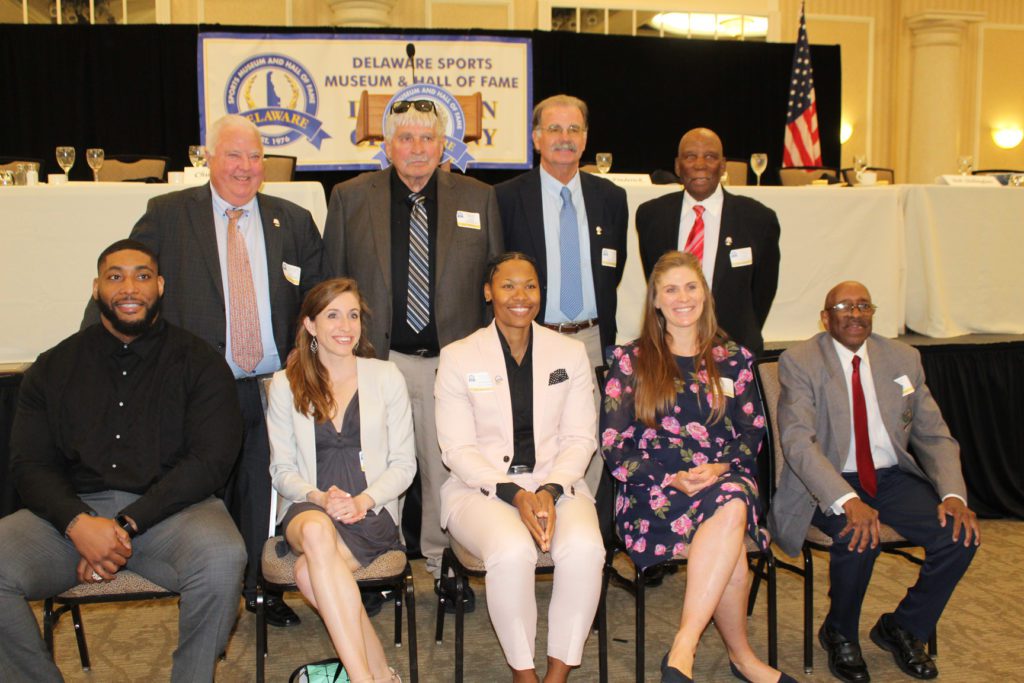 WILMINGTON — A full house gathered at the Chase Center on the Riverfront on May 12 to welcome the latest inductees to the Delaware Sports Museum and Hall of Fame. The nine men and women brought into the hall represented a diverse group representing all corners of Delaware and a variety of sports.

Chuck Durante, the president of the DSMHOF, told the crowd that the waiting list for induction is long, a sign that athletics in Delaware is thriving. The list is “brimming with vintage candidates,” he said.

The museum and hall of fame committee works hard year-round to celebrate and investigate athletics in Delaware, Durante said, adding that it is currently working on a project that would include the coaching records of men and women in the state. With that, he turned to the night’s honorees (listed in the same order they were at the dinner).

Shillinglaw spent 39 years as the men’s lacrosse coach at the University of Delaware and is credited with introducing the sport to thousands through his work with the Delaware Lacrosse Foundation.

He went 310-303 as a collegiate coach, winning 15 conference titles and reaching six NCAA tournaments, including the final four in 2007. He was the the head coach of Team USA for the 1999 World Cup of Lacrosse, and he was very involved with the United States Intercollegiate Lacrosse Association.

“This award is less about me than the people around me,” Shillinglaw said. He specifically mentioned his wife, Tina, who understood the demands on a college coach, and his three daughters. “They were my biggest cheerleaders and still are today.”

While a student at Saint Mark’s High School, Ginolfi earned a spot on Team USA for the 2006 Hockey World Cup and, at 17, was the youngest athlete on the squad. She played in 261 games for the national team over 14 years, including in three Olympic Games.

At the University of North Carolina, she led the Tar Heels to two national championships. She was a two-time first-team all-American and was the national player of the year as a senior in 2011. Her No. 23 has been retired by UNC.

Ginolfi talked of her appreciation for her field hockey career and said even the disappointments helped shape who she is today. She said she hopes that she has inspired others.

“I hope I inspired the next generation and that they outshine me,” she said.

Ginolfi, now living in San Diego and expecting her first child with husband Jon, said she always considered herself part of something bigger and that no matter where she lives, she considers Delaware her home.

The state’s coach of the year in three sports at Wilmington High School, Thompson won three state championships in boys basketball over an 11-year span. A science and math teacher, he led the Red Devils from 1976-77 until the school closed in 1999.

He produced multiple first-team all-state players, and his team once had a 49-game winning streak in Blue Hen Conference Flight B play. In track, he won a state title in 1995, and he also helmed the tennis team. He sent 92 percent of his student-athletes to college.

Thompson is a member of five other halls of fame.

Thompson spoke of his upbringing in segregated Virginia and how he saw the white children playing tennis, wearing white and using a white ball, as was the case. He eventually became an accomplished tennis player and made his mark in tennis and basketball as a player and coach.

He said his stepfather was an inspiration. He told Thompson, “’Do not let any may outwork you.’ It stuck with me all these years.”

Holloway was a student at St. Mary Magdalen School in Brandywine Hundred when a parish priest introduced him to harness racing at nearby Brandywine Raceway. He was hooked.

After graduating from the University of Delaware with a  degree in animal science, Holloway became a trainer. He was inducted into the Harness Racing Hall of Fame in 2019.

One of his horses, Tuff Choice, won 13 consecutive races in 1985 at the Meadowlands in New Jersey, the sport’s premier track, and another, Jenna’s Beach Boy, won three Breeders Crowns and was Pacer of the Year in 1995 and ’96. Holloway is ranked eight all-time in stable earnings as of 2021.

He joins his brother Jack in the Delaware Sports Museum and Hall of Fame. Jack Holloway is a 2008 inductee.

Holloway was the briefest of the speakers. He offered a quick thank you, especially to his wife and children, before returning to his seat.

Although she entered Tatnall School as a soccer player, Bottorff found her greatest success on the track and the cross country trail. She graduated holding 21 state records, including nine individual, and was a five-time high school all-American. Her success continued at Duke University, where she was an NCAA champion and all-American.

Bottorff, who lives in Boston, said she loved the excuse the dinner provided for her to come back to Delaware. Bottorff said her high school coach, Pat Castagno, knew the importance of having fun and developing relationships through athletics.

“When all of our energies were channeled into a common goal, it just became exponentially more fun,” she said.

Rushdan was Delaware’s first five-time first-team all-state player in any sport, and when she graduated from St. Elizabeth High School in 2007, she held the girls’ basketball scoring record with 2,464 points. She led the Vikings to the 2007 state championship and was a three-time state player of the year.

At Rutgers University, she made first-team all-Big East as a senior. She played in the most games ever for the Scarlet Knights and is one of only two players to record a triple-double. She ranks 20th in scoring in program history. She was selected 15th overall in the 2012 WNBA draft and played in Israel professionally for a year.

Now an assistant coach the University of North Florida, Rushdan gave an impassioned speech and said it was “humbling” to be on stage with the other inductees. She said she was grateful “because the journey wasn’t always easy.”

Basketball was Rushdan’s safe haven, and it provided her the opportunity to have many important people in her life. She credited her older teammates for teaching her to do things “the right way.”

After injuries derailed her playing career, Rushdan returned to Wilmington and worked at a bank for four years, where she met her wife, who didn’t have any idea who Khadijah Rushdan the basketball player was. That turned out to be a blessing.

“There were no expectations,” Rushdan said. “I was simply able to be me.”

King is a longtime athlete, teacher, coach and civic leader in Delaware. He was a two-time state cross country champion at Howard High School, and he was also a state champion in the 880 and low hurdles as the Wildcats won three New Castle County and state championships while he was there.

After excelling at Morgan State University, King returned to Howard, winning boys state track titles in 1908, ’83 and ’84, as well as a girls title in 1982. In 2001, he resurrected the Wednesday night track meets at Baynard Stadium, which were named in his honor in 2015.

King was unable to speak, so his daughter Tiffany did the honors. She said it took a while for her to realize the influence her father had on so many people at Howard and through his work in the community.

“As I get older, I appreciate him more as an athlete and a coach,” she said.

She said she experiences her father as “the people’s coach” because everyone knows him.

A graduate of Howard High School, Still was a second-round pick out of Penn State by the NFL’s Cincinnati Bengals. He recorded 43 tackles over a four-year career, which included one season with the Houston Texans.

Still was the state lineman of the year in 2007, when he made 59 tackles, 18 for a loss. He also was a member of the track and basketball teams at Howard. At Penn State, he was the 2011 Big Ten defensive player of the year, only the second defensive tackle to win the award. He was also a finalist for the Outland and Bednarik awards.

Still paused his NFL career in 2014 to care for his daughter, Leah, who was battling neuroblastoma. For their determination and perseverance against cancer, Still and his daughter received the 2015 Jimmy V Award at the Espy Awards.

During his talk, Still recalled trying to impress the upperclassmen during a basketball tryout when he was a freshman. He jumped up to dunk, and when he landed, he broke his leg. Part of his recovery, he said, was having the courage to jump again and to trust the healing process. He likened that to making a move in one’s life “and not knowing where you will land.”

Still, who lives in Houston, said he would not have the success he has without a support system, and his family has been that for him. He grew up without a lot of things, but support was never lacking.

“There are a lot of people who played a role in my success,” he said.

The man known to all as “Fredman” arrived in Sussex County from Philadelphia in 1975 as a special education teacher, football and track coach at Cape Henlopen High School. He led the Vikings to state championships in cross country, indoor and outdoor track. He was named the state track and field coach of the year in 1984 and ’85.

Since 1982, he has written a weekly column for The Whale and now the Cape Gazette. “People in Sports” has run uninterrupted for 40 years and has made Frederick a household name downstate.  He also was a founding member of the Lewes Polar Bear Club, and through its partnership with the Special Olympics has raised more than $12 million for Delaware’s special athletes.

He joked about many of the events in his life, such as being named track coach despite having no experience in the sport. He added that he is a study in patience since he was first nominated for the Delaware Sports Museum and Hall of Fame in 2004.

The Delaware Sports Museum and Hall of Fame is located at Frawley Stadium in Wilmington. It is open two hours before every Wilmington Blue Rocks game and closes 30 minutes before first pitch. Admission is free. For more about the fall, go to www.desports.org.