Laurel head coach Joey Jones said heading into this season that when he took over at Laurel three years ago he felt that this was the group of kids that could do some special for the Bulldogs.

“As a coaching staff we knew what we had and we felt this could be our year,” Jones said.

The Bulldogs won their season opener 41-8 over Sussex Tech on Friday, September 3 bolstered by 191 passing yards from quarterback Kaden Shockley.

“Kaden’s play was kind of what we’ve been waiting for everyone to see. He’s a kid that performs day in and day out for us. His growth from Freshman year to now has been exactly what we’ve been hoping for,” Jones said. 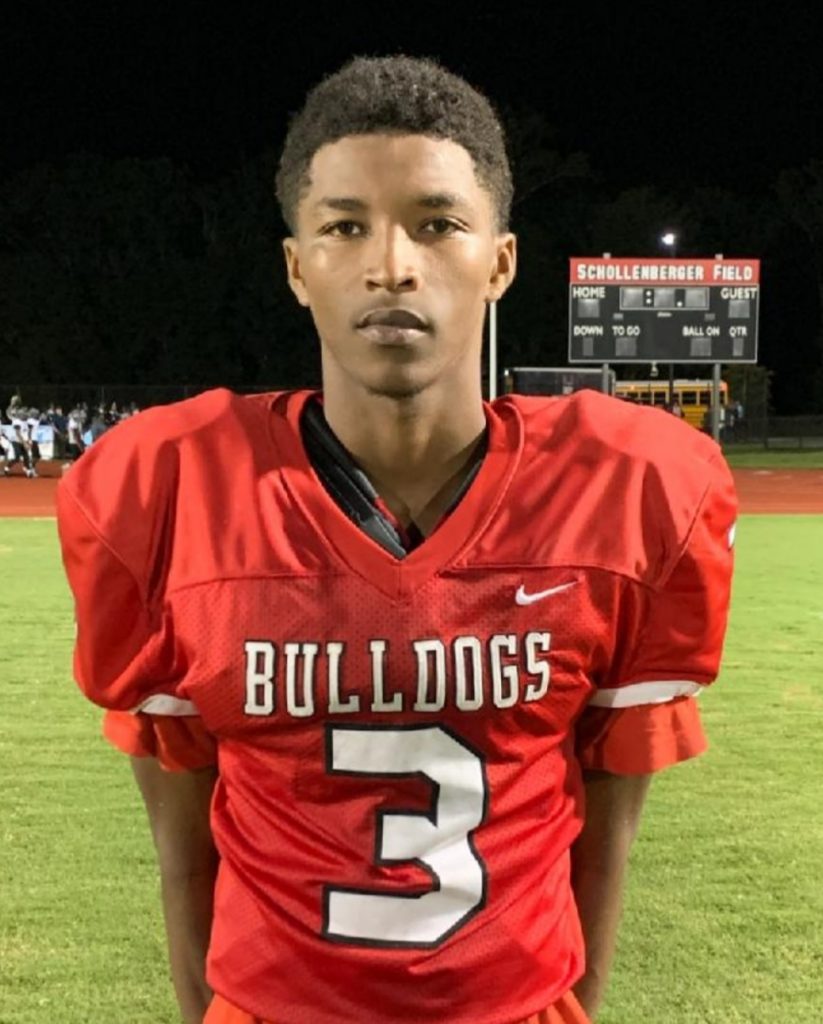 Shockley completed 7 of 10 passes for 191 yards and three touchdowns. He connected with Javier White twice for touchdowns once on an 81 yard connection on a third and 22.

White hauled in four passes for 160 yards and also rushed for a touchdown.

“We’re lucky to have athletes like Javi. He can play any position at any time, and does so with a smile on his face. He’s a really fun kid to have around and allows the rest of the team to have success around him by forcing the defense to key on him,” Jones said.

“ He also makes me look like a much better play caller than I am by making plays that very few players can make,” added Jones.

The Bulldogs opened the scoring when Shockley connected with White on an 81 yard pass play for a touchdown. Mike Gonzalez-Perez added the PAT kick and the Laurel led 7:00 with 9:02 left to play in the first quarter.

On the ensuing kickoff Laurel recovered a fumble inside the Sussex Tech 10 yard line. But the Ravens defense stiffened and stopped the Bulldogs on the one yard line.

The Ravens then went on a 14 play 99 yard drive using 7 minutes of clock capped off by a 16 yard touchdown pass from Justin Moore to Ian Reiley. Jaryn Sample converted to the two point run giving Sussex Tech an 8-7 lead early in the second quarter.

Laurel took back the lead when White scored on a two yard run with 6:00 left in the first half. Gonzalez-Perez added the extra point to put the Bulldogs back up 14-8.

Laurel had a key goalline stand as time ran out in the first half stopping the Ravens at the two yard line.

Sample had 75 yards in the first half for Sussex Tech.

The second half saw a much different Laurel approach as the defense stuffed the Ravens on their opening drive of the second half.

“The biggest challenge in the first quarter was their size. Tech was bigger than the film showed, so that was an adjustment for our kids. Brian Hearn, had a great game plan all week and made a slight adjustment in our alignment,” Jones said.

Shockley connected on two more touchdown passes in the third quarter with a 28 yard strike to Brady Lee and a 20 yard pass to White.

Laurel took a 28-8 lead into the fourth quarter.

“as a Junior that has started every game in his (Shockley)  high school career, his experience is extremely valuable to not only his success, but the success of the entire program,” Jones said.

The Bulldogs pulled away in the fourth quarter with a pair of rushing touchdowns. Omori’Yon Cannon had a 10 yard run and Pat Belle scampered for a 25 yard touchdown run giving Laurel a 41-8 lead.

While the score was lopsided the two teams were much closer statistically.

Laurel amassed 247 total yards while Sussex Tech totaled 228 yards including 199 rushing. Javier White led Laurel with three touchdowns in a 41-8 win over Sussex Tech. White rushed for a 2 yard touchdown and caught touchdowns passes of 81 yards and 20 yards for the Bulldogs.

The Ravens were hampered by penalties in the second half being flagged eight times for 90 yards as well as five turnovers in the game.

Both teams travel north next weekend with Sussex Tech heading to Delcastle for an 11:00am kickoff. Laurel will play at Brandywine Friday night at 7:00 in the “Battle for the Bone”.

This will be the second straight week that Class A Laurel will play an opponent up a class as Brandywine is a Class AA school.

“The up-side to our non-conference schedule is that all 4 teams are 2A. With all the challenges that presents, it certainly should prepare us for a hopeful playoff run,” Jones said.