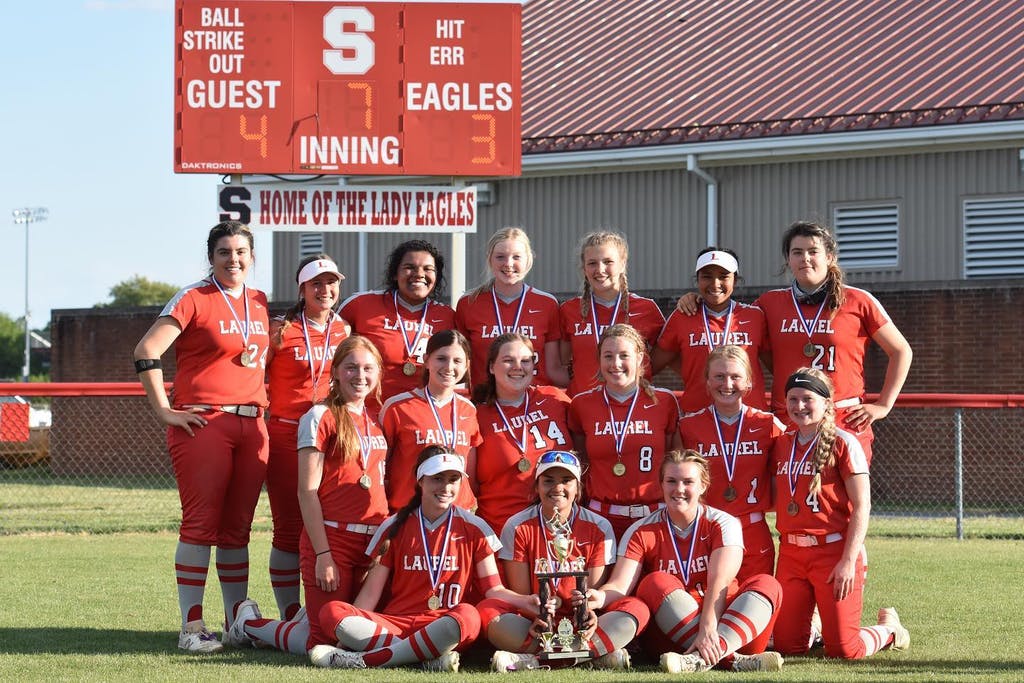 The Laurel Bulldogs scored in the top of the 7th inning to break a tie and secure the Henlopen Conference softball championship in Smyrna 4-3 this afternoon.

The speed of leadoff batter Couri Smith turned out to be the difference in the game. The Laurel center fielder scored 2 of the team’s 4 runs including the game-winner in the final inning. Smith was 3-for-4 and singled to shallow left to lead off the 7th. She took 2nd on the hit, advanced to 3rd on a sacrifice bunt by Bailey Ullman, and scored on a ground ball out to deep second by Bailey’s twin sister Ashlyn Ullman. Freshman pitcher Kylee Hill surrendered a 1-out single to Smyrna leadoff batter Gianna Duca, but retired the next two Eagles to start the celebration.

The game was scoreless until Smith singled in the third inning, stole second base and scored on Bailey Ullman’s single. The Eagles tied the game in the home half of the inning on a 2-out RBI single by Payton Dixon, scoring Makayla Brantley.

Laurel broke the tie in the 4th inning on singles by Kylee Hill and Peyton Givans and a sacrifice fly by Carlie Venables to take a 3-1 lead. Smyrna got a leadoff single by Meghan Shirey in the bottom of the 4th, but the Bulldogs third baseman (Kaegan Brittingham) snared a line-drive bunt and doubled Shirey off 1st for a key defensive gem. Undaunted, the Eagles scored a 2-out run on an RBI single from Hailey McCutchan to cut the Laurel lead to 3-2.

The Eagles never led in the game but forced another tie at 3-3 in the fifth, when pitcher Dixon smacked her 2nd 2-out single to score Taylor Lipkins.

The game remained tied at 3-3 until Laurel and Smith’s heroics in the final inning.

Laurel takes a 15-4 record into next week’s State Tournament while Smyrna drops to 12-6  facing Red Lion Christian Academy Saturday in their final game of the regular season.