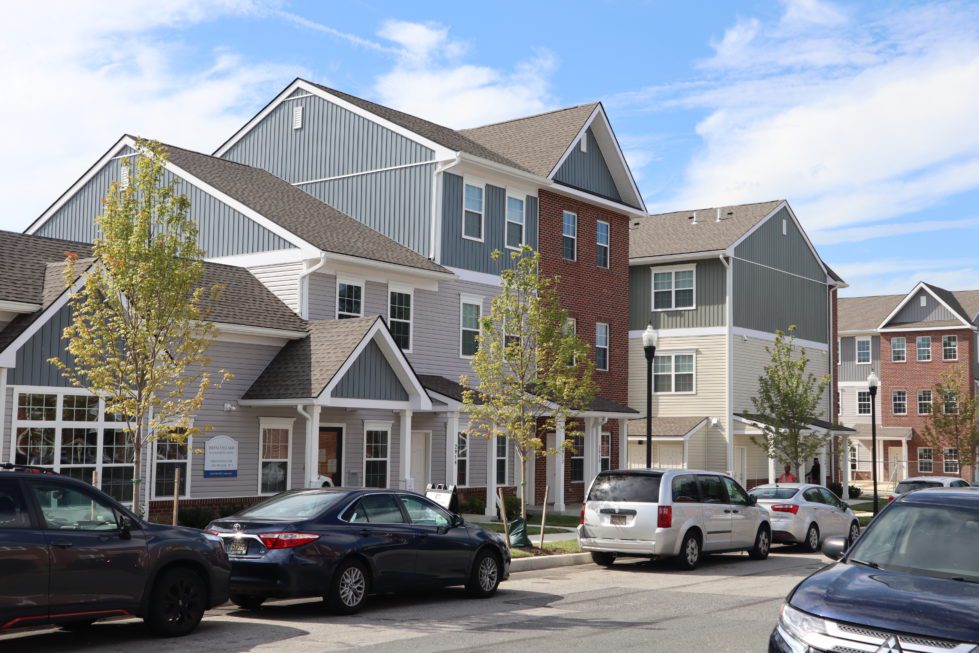 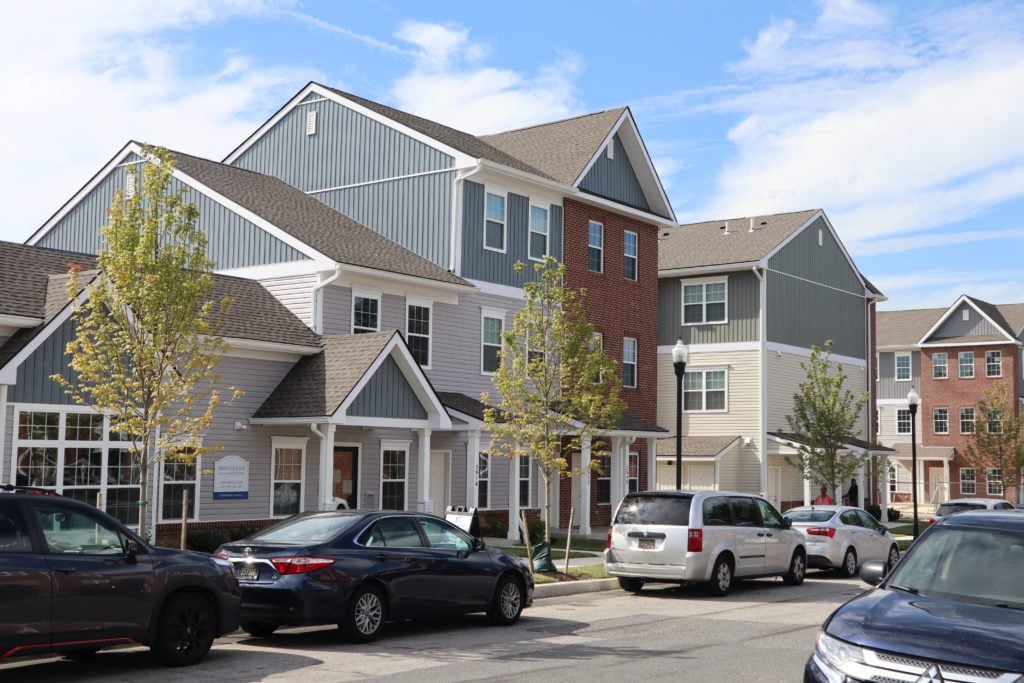 The community center and some of the new homes at Imani Village in Wilmington’s Riverside neighborhood were the site of a ribbon-cutting ceremony Tuesday. (Charlie Megginson/Delaware LIVE)

Shortly after single mother of two Alison Mendez moved into northeast Wilmington’s Riverside neighborhood five years ago, there was a shooting right behind her home.

“It scared me and my kids,” Mendez said. “But today, it’s changed.”

She spoke before a crowd of some 300 community members, among them leaders in government, business, nonprofit, and philanthropy.

They gathered in Riverside for a ribbon-cutting event to celebrate the phase one completion of Imani Village, a mixed-income family rental community designed to disrupt the cycle of urban poverty.

“Imani” in Swahili means faith, explained Logan Herring, CEO of The WRK Group, which is comprised of The Warehouse, REACH Riverside, and Kingswood Community Center.

“It takes a village to raise a child,” Herring said. “You put both of them together and what do we have? Imani Village.” 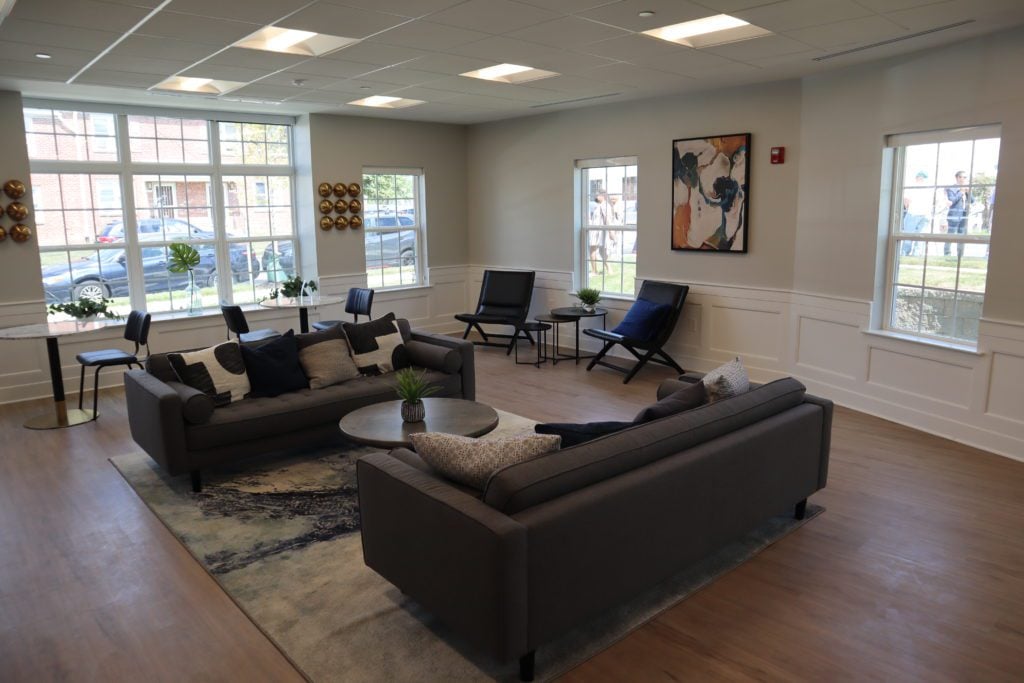 Inside the community center at Imani Village in Riverside. (Charlie Megginson/Delaware LIVE)

The affordable housing project is just one component of The WRK Group’s master plan for Riverside. It envisions a purpose-built community focused on three pillars: redevelopment, education, and community health.

By investing in the community holistically, project leaders hope to give residents opportunities to build generational wealth that allow them to escape the cycle of poverty.

Riverside sits between Route 13 and Interstate 495 in northeast Wilmington. 70% of children in the community live beneath the poverty line and 41% of adult residents haven’t graduated high school.

One-third of the community’s 3,000 residents live in public housing and the median household income is $9,277 per year — about seven times less than the national average.

Many of Tuesday’s speakers grew up in the neighborhood and spoke of their desire as children to “get out” and make something of themselves.

Once The WRK Group’s vision is achieved, Herring and others hope Riverside won’t be a place to escape, but rather a place to thrive.

“We are providing ‘hand-ups’ and not handouts,” said Charlie McDowell, board director of REACH Riverside. 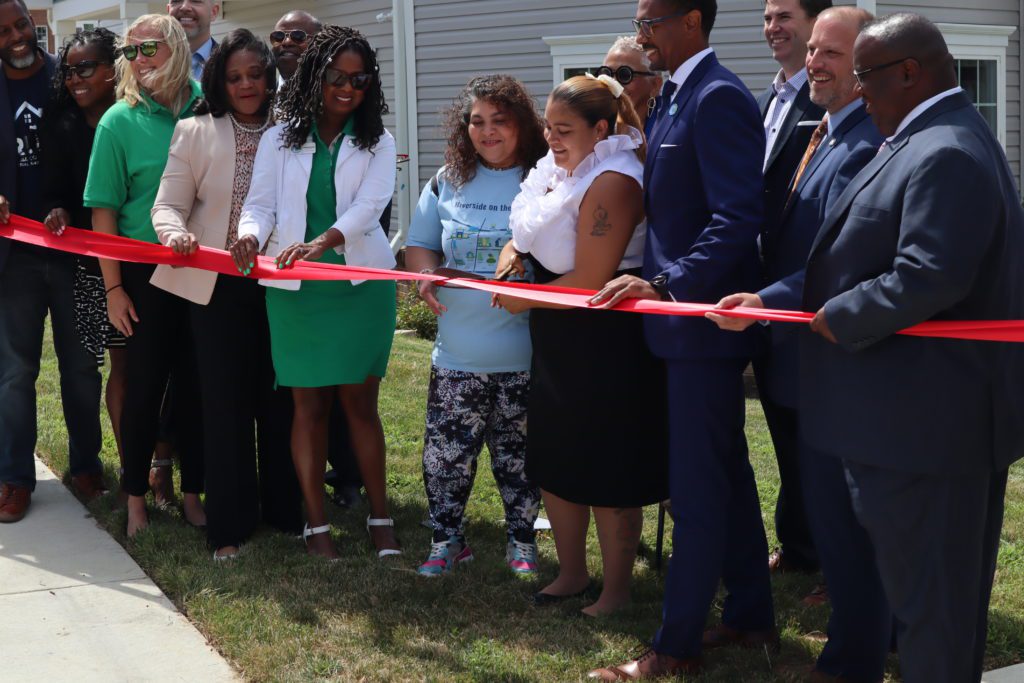 Alison Mendez cuts the ribbon at Imani Village in Riverside. It’s a far cry from when she moved to Riverside five years ago and there was a shooting behind her home. (Charlie Megginson/Delaware LIVE)

It’s a level of investment the community has never seen — something Attorney General Kathy Jennings called “the antidote” to decades of redlining and discrimination.

“Everyone deserves access to safe, affordable housing. It is a basic human right,” Jennings said. “But all too often in our state and in our country, it has been denied to people.”

According to The WRK Group, Riverside was originally built to create an affordable neighborhood for white veterans returning home from World War II.

Though the bill helped white Americans prosper and accumulate wealth in the postwar years, it didn’t deliver on that promise for veterans of color, according to The WRK Group.

As a result, white veterans and their families were able to leave the Riverside neighborhood as they pursued the “American Dream” and life in the suburbs. The mass exodus would come to be known as “White Flight.”

As subsidized housing became available, low- to moderate-income Black Americans began to move into Riverside, but the neighborhood didn’t receive the same level of investment or resources as predominantly white communities. Many banks refused to offer mortgages and loans for homes and businesses in Riverside.

The WRK Group hopes that by creating a well-resourced community that residents are proud to live in, the first steps can be taken to end intergenerational poverty, reduce crime, and offer an alternative to failing public schools. 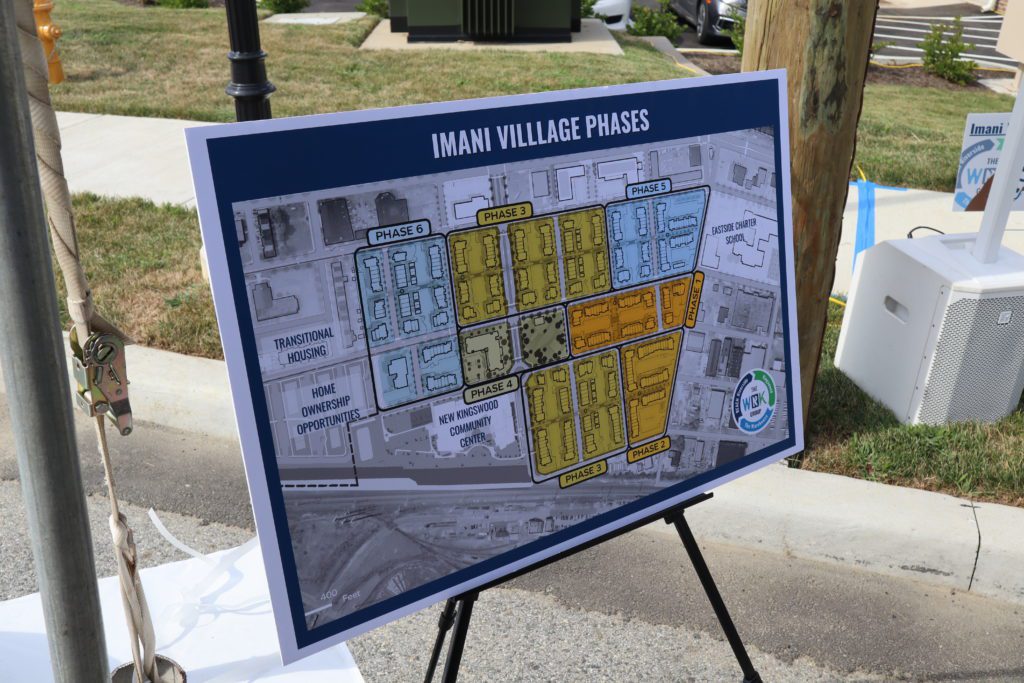 Tuesday’s ribbon-cutting marked the completion of the project’s first phase, which includes 74 one, two, three, and four-bedroom apartment homes.

The majority of new apartments are affordable at a variety of income tiers with apartments set aside for seniors, veterans, and individuals with disabilities.

Of the 74 apartments, 15 will not have income restrictions.

All residents will have access to on-site supportive services. 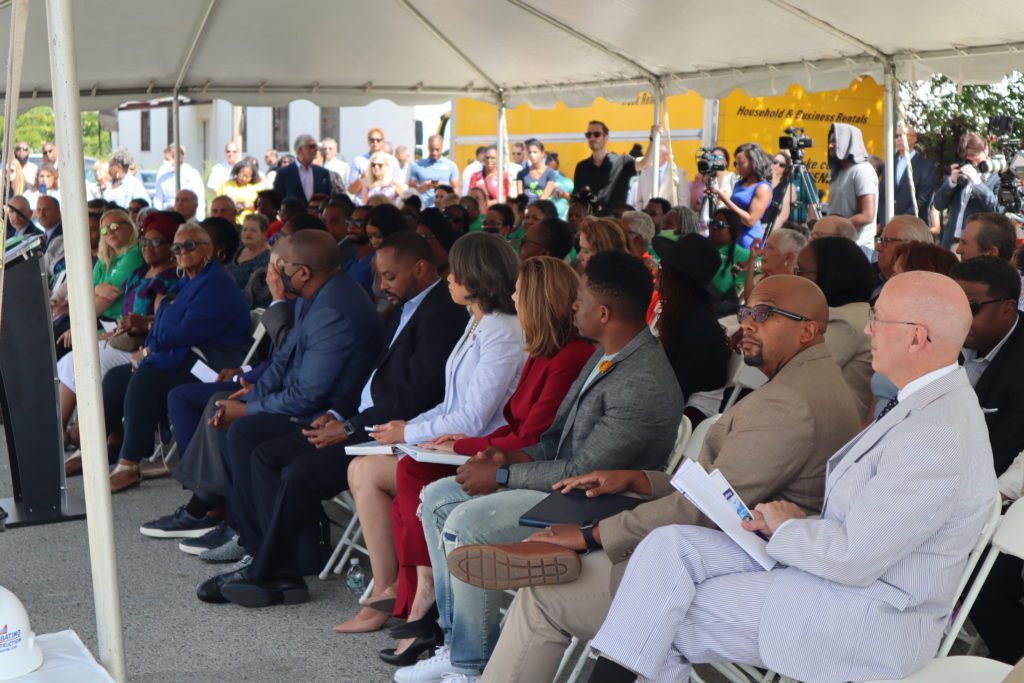 “I went into teaching because I wanted to make a difference, as is true of many teachers,” Meyer said, “and you learn pretty quickly that standing up and teaching ‘y=mx+b’ and ‘slope=rise/run’… isn’t necessarily what all of these kids need.”

When the plans to revitalize Riverside were just beginning to come together, Spadola said there were a lot of doubters.

“We started having some meetings and we told the residents about the positive change coming and they would say, ‘we don’t believe you,’” Spadola said.

According to McDowell, $224 million more was raised from corporations, nonprofits, and individual donors.

That sped up the timeline significantly, said Timothy Henkel, president of Pennrose, the developer behind Imani Village.

“This was originally contemplated as an eight-phase project,” Henkel said. “Through the hard work of many, this is now a six-phase project. It didn’t get smaller — it just got faster.”

Phase 1 was financed through an allocation of Low Income Housing Tax Credits from the Delaware State Housing Authority, which also contributed construction and permanent debt.

The tax credits are being purchased by Cinnaire, who also provided permanent financing.

New residents are being given $250 Target gift cards to help cover moving expenses. To donate any amount, text IMANI to 50155.