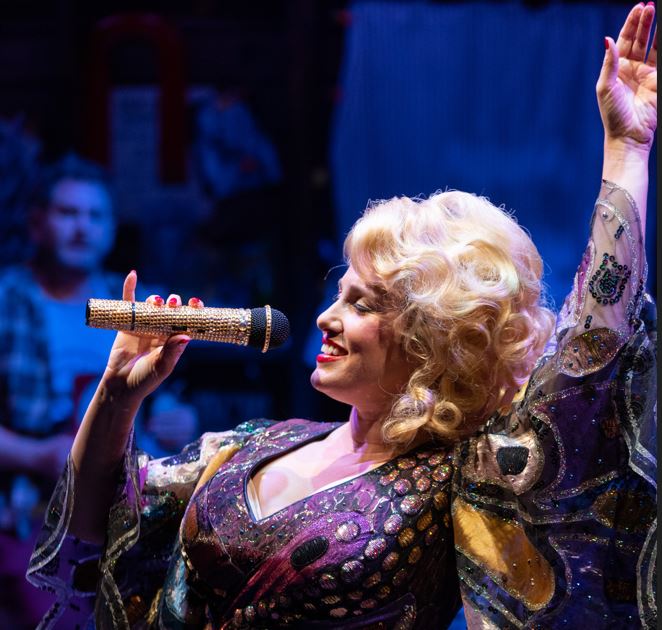 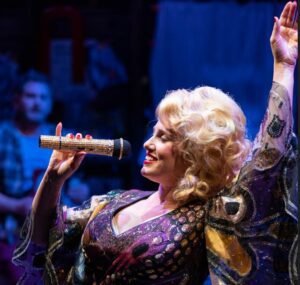 The Delaware Theater Company’s new show featuring the music of Dolly Parton should have come with a tagline: “This production brought to you by the COVID-19 pandemic.”

If there had been no pandemic, then husband and wife director Gabriel Barre and actress/singer Tricia Paoluccio would never have retreated to a family cabin in California with their two children.

Florida Studio Theatre in Sarasota, Florida, would never have landed COVID-19 money to launch a one- or two-actor new production.

And the theater never would have reached out to Barre seeking ideas and funding for new shows.

Now, “Here You Come Again” — the story of a man whose parents are making him live in their attic during the lockdown — is in previews at the Wilmington Riverfront theater with opening night Saturday.

The show will travel to five other theaters, including the Goodspeed Opera House in Connecticut, when its First State run is over Oct. 2.

When the Florida theater contacted Barre, he sent back three ideas, including “Tiger King, The Musical,” based on the real-life star of the Netflix series, and a show based on Dolly’s music.

Because he had a ringer for a star: His wife, who has been singing Parton’s music since she was a child in California. 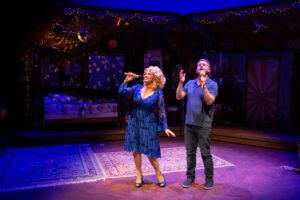 Paoluccio said she vividly recalls hearing “Here You Come Again” on the radio when she was 6. The family lived on a farm in Modesto and her father owned an engineering company.

She was in her dad’s office when she heard the song and was transfixed. One of the engineers typed out all of the lyrics for her.

“When I was a little girl, I didn’t know that you weren’t supposed to copy,” she said. “I just innocently thought that is how a person sings. You copy what you here.”

She didn’t copy only the words and music.

“I’ve been singing ‘Here You Come Again’ since I was 6 years old, exactly like she did,” she said. “I learned every vibrato. It is so easy for me because I don’t even try. I just know how the vibrato is in my throat and I’ve trained my vocal cords to copy her scratch and her slur and just all of that. I don’t even think about it. It just comes out.”

Paoluccio would turn into Dolly for fun or to get people rehearsing a show to laugh during lengthy tech rehearsals.

For years, she would say to Barre that they ought to do a show, but it shouldn’t be just about Dolly. It should be about some fanboy and use Parton’s music.

She used to tell her friend Kevin Cahoon that they should do a show together, but nothing ever progressed.

Then Florida Studio Theatre called back to say they LOVED the Dolly Parton idea.

Funny Man Bruce Vilanch agreed to cowrite the show. (DTC theatergoers may remember Vilanch as the creator of “A Sign of the Times,” based on Petula Clark music. It played the theater December 2018.) 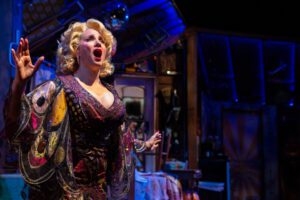 Actress Tricia Paoluccio has been singing Dolly Parton’s ‘Here You Come Again’ since she was 6 years old. Photo by Matt Urban.

They decided to use the fanboy idea and name the main character Kevin, after Paoluccio’s friend.

“Kevin is going through a midlife crisis in a sense, but also a crisis in which COVID plays a role,” Barre said. “COVID is a backdrop for the show.”

The pandemic also provided them with a stage setting.

Paoluccio’s friend Simon Pearl was quarantining with his parents in English, and he told her he had to live in their attic, which only had an outside ladder for entrance and exit.

She told him she was stealing that idea for the show.

The attic room set dominates the stage when the audience files into the theater. The play begins with an unseen Kevin, played in Delaware by Jamison Stern, tossing bags of groceries into the room and eventually appearing on the top of the ladder to climb in.

Barre eventually did a Zoom reading of the play for Florida Studio Theatre. but Paoluccio and Cahoon were working elsewhere and two other actors played the roles of Kevin and Dolly.

As the show began to look like a commercially viable idea, their lawyer, Tom Distler, offered to try to reach Parton’s people to get their approval to use her likeness and music. Distler knew Parton’s lawyer in California.

Barre and Paluccio decided to make a video to send with the rest of the information.

“Gabe had to make me start over about five times because each time I started talking to Dolly Parton, I would cry and he would say, ‘Stop it. You seem like a stalker.'” Paluccio said. “But I’ve just loved Dolly Parton my whole life. I think w e have a real opportunity to bring a lot of hope and joy to people and also bring people together.”

Distler sent material about the show in September 2020. About once a month, he’d call to see if there was any word. 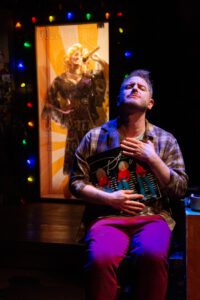 Jamison Stern plays Keven, who conjures his not-so-invisible friend Dolly Parton to help cope with COVID and his life. Photo by Matt Urban

She asked them to drop one little joke about her hometown and granted Paoluccio lifelong rights to portray her. The team still sends Parton major changes to the script for her approval.

When the show started coming together at Delaware Theater, music director Eugene Gwozdz went in search of music for the band that will be playing on stage.

He was surprised to find that some of her songs had never been turned into formal music sheets.

Paoluccio says she’s not surprised. She has recorded in Nashville and been amazed at how the musicians work together to create the sound that ends up in the piece with nothing in front of them.

DTC will be setting a few songs into sheet music for the band.

Paoluccio said that it takes her about an hour to transform herself into her Dolly, complete with makeup, a big wig evoking Parton’s 1980s style and costumes that enhance her bustline while whittling down her waist.

“We’re a regional theater, so that is an actor’s responsibility,” she said. “The most challenging thing for me in this show right now is the physical aspect of transforming, which I will get better at.”

Paoluccio has found that playing Dolly hasn’t been difficult or a challenge.  She did it in a Nashville show at the Ryman Auditorium.

At DTC, she listens to the opening, which reminds her of that experience at the Ryman, and thinks of Parton.

“I just let her kind of speak through me,” Paoluccio said. “My entire goal with this production, my dream is that people get to feel like they were with her.”