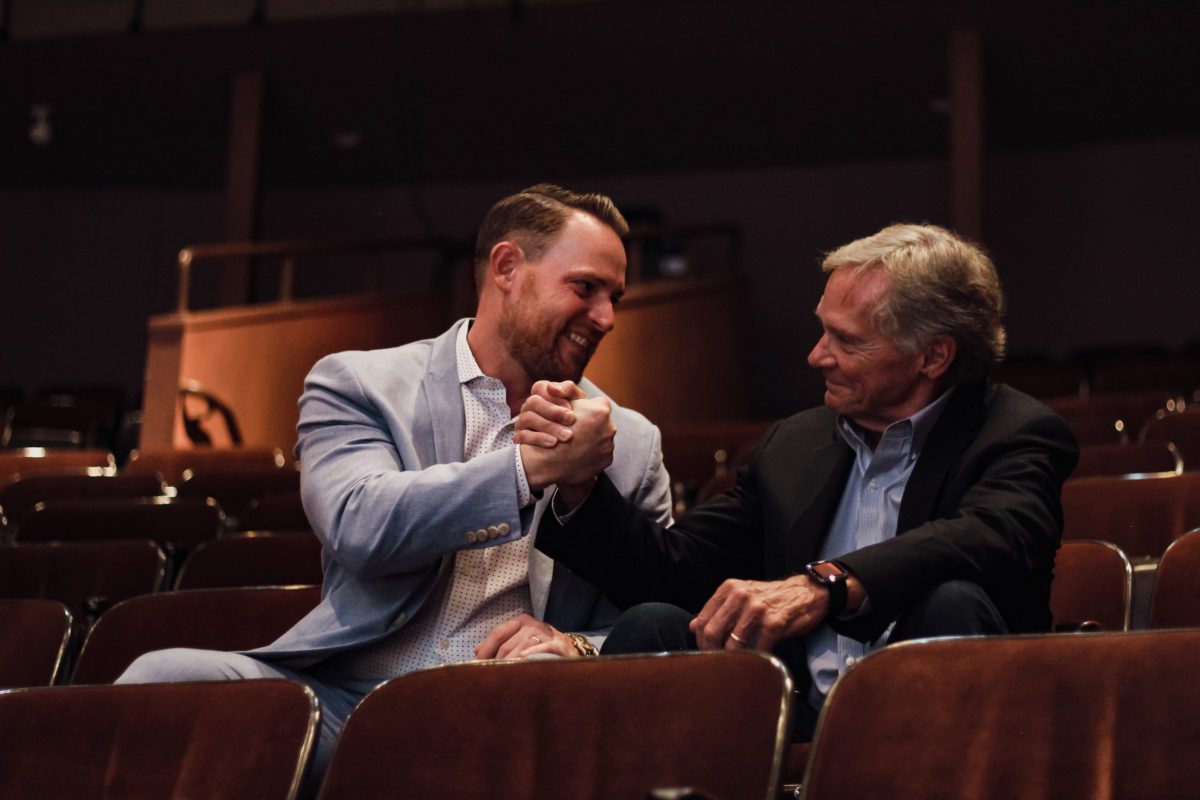 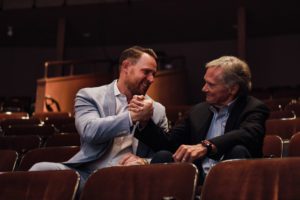 Matt Silva left, will become Delaware Theater Company’s executive director Aug. 16, taking over for Bud Martin, who will continue as artistic director until May.

Delaware Theater Company’s executive director Bud Martin will retire in 2023 and turn control of the spotlight over to Matt Silva, who has been managing director for four years.

During Martin’s decade at the riverfront theater, he helped restore its luster, which was at a low point when he took over.

He poured a lot of his own money into the theater’s budget and leveraged show business connections to bring in crowd-pleasing shows that were working out the kinks in hopes of hitting the boards on Broadway. That also served to enhance the theater’s regional clout.

Martin directed at least one show a season and even took the stage himself as an actor for only the second time in 37 years to appear in 2018’s “Heisenberg.”

“I have been honored to lead DTC for 10 years, working with a talented staff to position the theater as one of the preeminent regional theaters in this country,” Martin said in a press release. “I’m deeply grateful for the tremendous support I’ve had over the past 10 years from community leaders such as Jack and Carla Markell and Secretary of State Jeff Bullock, as well as from countless trusted board members.”

Among the productions Martin brought to town were “Because of Winn-Dixie,” based on Kate Camilla’s book; “Diner,” based on the popular movie; “A Sign of the Times,” based on Petula Clark songs; “Something Wicked This Way Comes,” based on the novel by Ray Bradbury; “Maurice Hines is Tappin’ Thru Life” as told by the dancer himself and “Other World,” a new piece showcasing diverse talent set against online gameplay. 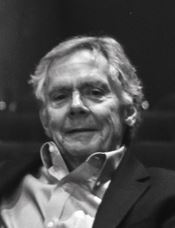 But he also showcased work by regional playwrights such as Bruce Graham and regional interests such as the Philadelphia Eagles (“Tommy and Me”) and artist Jamie Wyeth (“Nureyev’s Eyes”).

While Silva will take over as executive director Aug. 16, Martin will continue to serve as artistic director through the end of the 2022-23 season. He is set to direct February’s comedy “One Man, Two Guvners.”

Silva, 37, met Martin at Act II Playhouse in Ambler, Pennsylvania when Silva was a grad student at Villanova and Martin was artistic director. Martin almost immediately realized that Silva’s skills with people were a plus and that they shared the same ideas about theater.

When Martin offered Silva the managing director job four years ago, he told Silva that he knew Silva’s interests lay in the artistic realm. Silva would need to set that aside to manage the business end of things, Martin said but directing would be folded back in.

That was to come in spring 2020 with “The Million Dollar Quartet,” but was delayed until December 2021 when it became a smash holiday hit.

Martin said he decided to step away from the head job after seeing his wife Kate’s face on a recent cycling tour of France.

For years, she’s wanted to travel. For years, he’s been the one whose schedule prevented it.

“I figure that I need to take some time and support her more rather than having it constantly her supporting me,” he said.

Martin has recently had a second surgery on his lower back that alleviated the pain he’s had for years.

Silva has exceeded his expectations in handling both financial issues and people — “he’s younger, he’s got more energy, he’s smarter, he’s faster” — and the theater is in the best shape it’s been in since he took over.

Thanks partly to state and federal COVID-19 money, the theater for the first time in Martin’s control — maybe ever — reached a sort of Holy Grail financial moment.

This year, it’s been able to set aside subscription money to use during that season rather than needing to spend it immediately on the season underway.

“It’s the optimal time to hand over the reins,” Martin said. “He’s had lots of responsibility. It’s time he had the authority.”

Martin said his favorite moment at DTC was the production of “Diner” in December 2015. With enhanced payments from the producers, that run included an automated set that moved a red-leather diner booth and more around the stage.

He believes it was the first time that was ever done in the First State. The set sits in a warehouse waiting to be called to Broadway.

Also appearing that season was the Maurice Hines’ show; “Playing the Assassin” by David Robson;  “Women of Will” by Tina Packer; “Nureyev’s Eyes” by David Rush; and “The Explorers Club” by Nell Benjamin.

Silva hopes to leverage the success DTC has had by focusing more on individual ticket sales.

Like many theaters, Delaware Theatre took a hit with subscribers.

While only half returned when the theater opened a full season in fall 2021 with masking required, it was still much more than other regional theaters experienced, Silva said.

Many have returned, but individual tickets also have soared, he said.

By the time individual tickets sold for “The Million Dollar Quartet,” which depicts a night that Elvis Presley, Johnny Cash, Jerry Lee Lewis and Carl Perkins all ended up at a Memphis recording studio, were counted, the theater had surpassed its goal for the year, Silva and Martin said.

Theaters and other arts groups previously relied heavily on media reports about their performances, but that system has been dismantled as newspapers and other media shed reporters.

Video can be a large part of that, Silva said, but like many performing arts, theater doesn’t have all the parts in place for that until the show is moving into dress rehearsals.

Those shows usually run only three or four weeks, limiting the word-of-mouth grapevine.

To that point, the theater in October is bringing in “Black Angels Over Tuskegee,” part of a national tour. It’s a rare move by DTC, which usually produces its own shows from scratch.

“That’s an effort on our part to have more diversity in both play selection and try to help develop a bit of a diverse audience,” Martin said.

Martin said he’s been careful to make sure his theater connections in the city, region and elsewhere knew Silva and worked with him, to maintain both goodwill in Delaware and the pipeline of works-in-progress.

Silva said he’s learned much from Martin, including how to give financial notes to the board that carefully explain numbers instead of leaving the impression of a rapturous turn or doom-and-gloom.

Entertainingly, both men say that if they had a single show they’d want to see produced at the Delaware Theatre Company, it would be “Once,” a musical about a busker and an immigrant who write stories about their lives in Dublin.

The play follows in the footsteps of “The Million Dollar Quartet,” requiring performers to act, sing and play instruments.

It’s a trend catching fire in the industry, Silva said.