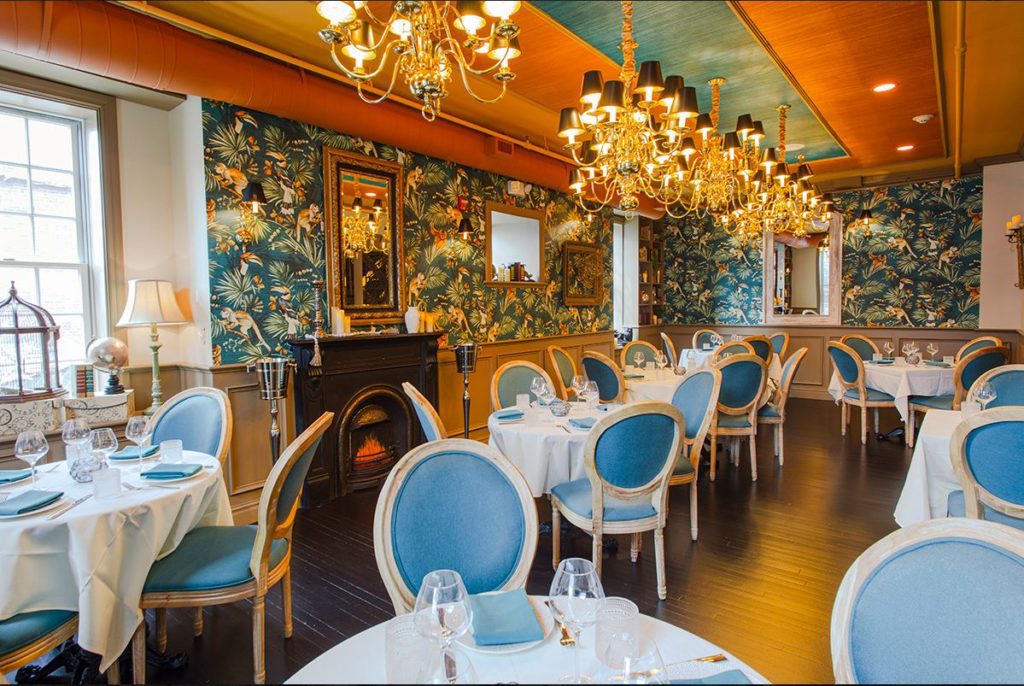 Hamilton’s on Main features this dining room on the front of the first floor.

For months, Newark residents and visitors impatiently waited for Hamilton’s on Main to open its doors. The anticipation grew when the restaurant hosted a private party last December, but an unexpected HVAC issue forced the hungry public to practice patience.

The wait is finally over. Hamilton’s on Main is now in a soft opening phase, and a grand opening will be in April.

The Main Street restaurant is the creation of restaurateurs Anthony and Jeremiah Brooks, who moved to Delaware from Harpers Ferry, West Virginia.

The couple want to establish a robust food-and-wine program on Main Street. But putting a fine dining restaurant in the old Newark Bank building has not been easy.

A lesson in perseverance

Jeremiah, the chef, and Anthony, the general manager, are no strangers to the business.

Jeremiah began his hospitality career in the front of the house some 20 years ago. But back then, there was no training program for managers. Instead, he had to learn customer relations and management skills on his own.

He realized that the kitchen was an informal classroom where he could acquire new knowledge every day.

“I cut my teeth working for some of the best in the D.C. area — James Beard Award-winning chefs, Culinary Institute of America graduates,” he said.

Meanwhile, Anthony grew up in his family’s New Hampshire restaurant.

“I’ve been around hospitality my whole life,” he said. He later worked for RARE Hospitality, which owned LongHorn Steakhouse.

The couple met 10 years ago. But the industry’s grueling hours kept them apart and, too often, stressed. So, they decided to open their own business for more control over their lives.

Unfortunately, they couldn’t find the right spot in Frederick, Maryland, where they lived at the time, or Baltimore.

While on day trips to Harpers Ferry, Anthony fell in love with the area. On one visit, he spotted a sign on an 1840 Greek Revival building that read: “Turnkey restaurant for rent.”

A week later, they signed the lease for Hamilton’s Tavern 1840 — named for a dog, not the Broadway play or Founding Father.

That was in 2019. In June 2020, Hamilton’s moved to a larger location with outdoor seating. However, the address was near a church, which affected their ability to secure a liquor license.

Meanwhile, the men visited Newark to help a friend renovate her house, and they liked the area.

Since the lease was up in Harpers Ferry, the time was right to consider a new location for a restaurant that could serve exceptional food matched with wine and spirits.

It just so happened that the old Newark Bank Building was vacant. 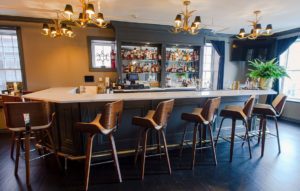 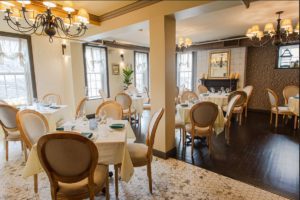 Hamilton’s on Main uses a white theme in its second floor dining room. 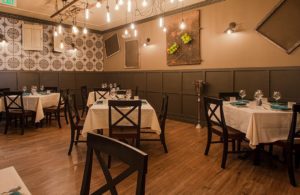 From watering hole to dining wonder

Given their penchant for older buildings, it’s not surprising that the partners gravitated toward the former bank, best known as Catherine Rooney’s old location. Finn McCool’s Irish Gastropub was a recent but short-lived tenant.

But years of use as a bar had battered the space. When they pulled up the entranceway floor, the paper lining had a distinct aroma that Anthony would like to forget.

“We eradicated the smell of beer,” he promised. “When you come in, you smell fresh paint and wallpaper.

Today, the renovated space has 175 seats, about 45 of which are on the patio. There is also a banquet space, and earlier this year, bookings for baby and bridal showers, birthday parties and other celebrations came pouring in.

Then came the bad news.

“We were 95% done with our renovations, and we discovered that our HVAC system had to be completely gutted and reinstalled,” Jeremiah said.

With the system replaced, the partners can focus on the food and the guest experience.

“Our service model is that we want our guests to feel like they’re coming into our home,” Anthony said.

“We are at once elegant and casual,” he said. “We like our guests to come as comfortable as they see fit, and we will provide an elegant experience without pretense. Fine service is the best benchmark for service we have found.”

While college students are welcome, “we’re not a college bar,” Anthony notes. “We’re not 45 pitchers — that will never happen in this establishment.”

The restaurant’s tagline is “authentically American cuisine,” which gives Jeremiah creative license to pull from the country’s reputation as a melting pot of culture and heritage.

“The menu is approachable and seasonal,” he explained. “Items are recognizable and easy to pronounce. But the ingredients, the style — the bones of the creation — are internationally influenced.”

Expect such elevated takes as pork wellington, a Berkshire pork tenderloin with prosciutto and duxelles wrapped in puff pastry.

The obligatory Angus burger comes with savory bacon jam, gorgonzola and garlic aioli. It hits the $20 mark, which might be a record for the area — although many versions now come close.

Most entrees range from $26 to $36, and many noshes could also eat like a meal — depending on your appetite.

The partners are happy the renovations are behind them. Between the construction and COVID-19, Anthony said it’s “been a rough go.”

“I’m looking forward to doing what we do best, opening the doors, enjoying people and creating memories,” he said. “That’s really what it’s all about.”