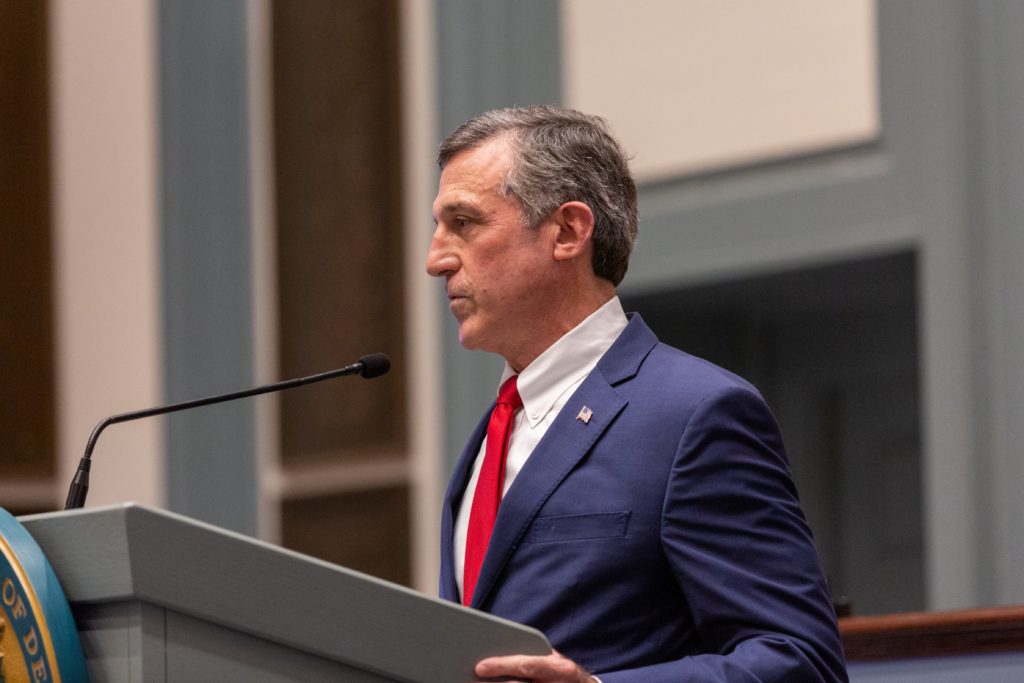 What the proposal doesn’t include are direct tax cuts for businesses and individuals despite the state raking in more cash than at any point in memory.

House and Senate Republicans are expected to give their reaction to the budget proposal at 3:45 p.m. Thursday.

Despite growing nearly 5% over the current spending plan, the FY 2023 budget fully funds the state’s rainy day fund and sets aside $15.2 million for the budget stabilization fund, bringing it to a total of $302.5 million. The state could tap into those funds in case of an economic downturn.

The governor also proposed a $56.9 million grant-in-aid bill to support nonprofit organizations and a $1.2 billion Bond Bill, which pays for transportation, capital projects and state infrastructure. That’s slightly less than last year’s $1.35 billion package, which was the largest in the state’s history.

In proposing the largest budget in state history, Carney hopes to strengthen the economy, expand opportunities for Delawareans, support families and develop the workforce.

He noted that while the state made it through the worst of the COVID-19 pandemic without cutting services, laying off employees, or raising taxes, it’s more important now than ever to responsibly manage the budget.

The pandemic, for what it’s worth, was a boon to the state budget.

Delaware has received unprecedented federal investment through the CARES Act and American Rescue Plan Act, and more recently the Infrastructure Investment and Jobs Act, commonly referred to as the Bipartisan Infrastructure Bill.

“The Real estate transfer tax has grown 30% a year for each of the last two years,” said Finance Secretary Rick Geisenberger during a Wednesday press briefing to detail the budget. “Normally it grows about 7.5% during good times; over the last ten years that’s been the average, taking out the effects of the rate increase that went into effect a few years ago.”

Among the investments and commitments made possible through federal funds, Carney said, is $229 million toward the unemployment trust fund.

“You could also call that a tax cut for small businesses,” Carney said Wednesday during a press briefing to detail the budget. “But for that replenishment, their unemployment insurance taxes would have to go up.”

All of the funds from the CARES Act have been distributed. Among those allocations were $193 million in relief for small businesses, $196 million for COVID-19 testing and contact tracing programs and $140 million for child care assistance.

Carney’s proposed budget would exempt 2021 unemployment insurance benefits from Delawareans’ personal income taxes — a move that is expected to save those individuals $25.2 million over 2 years.

The proposal would also double the volunteer firefighter tax credit leaving $1.8 million in those taxpayers’ pockets, extend military pension exclusions to attract highly-skilled young military retirees at an expense to the state of $1.5 million, and promote college savings and “ABLE” Plan savings to the tune of $667,000.

Contributing employers will also continue to be protected from COVID-related unemployment claim costs, a move that is expected to save them $11.4 million in direct costs and from premium increases that would otherwise follow the spike in claims.

The proposal also includes $404.7 million for environmental initiatives, including $30 million for agricultural preservation and open space, $7.5 million for shoreline and waterway resiliency and $367.2 million for clean water.

“First, we wanted to make sure that people working full time were not getting a wage that put them below the poverty line,” Carney said Wednesday. “And we had successfully done that. Then we looked at that $15 an hour minimum wage. We’re in line with the implementation of that. This budget, I don’t think it gets us all the way there — but pretty close.”

“It is designed to make us more competitive because we have lots of vacancies we have a lot of people are eligible for retirement,” he continued. “We’re having the same challenge that every business in our state is. So the answer is yes, there are pay increases in this budget to try to address those competitive needs and we are moving to fulfill the $15 an hour minimum wage.”

The proposal includes a weighted pay raise system that could give state employees between a 2% and 9% pay increase, with the lowest-paid employees receiving the highest increases as a percentage of their pay. That would likely mean more significant raises than the traditional 2% or $1,000 increase.

Cerron Cade, director of the Office of Management and Budget, said employees on the lowest end of the pay scale will be the last ones to make it to $15 per hour. The employees at that end of the pay spectrum are predominantly temporary employees and paraprofessionals in public schools.

Cade said the state is on track to ensure all state employees earn $15 per hour or more by 2025.

The proposal also includes a one-time $500 bonus for state retirees.