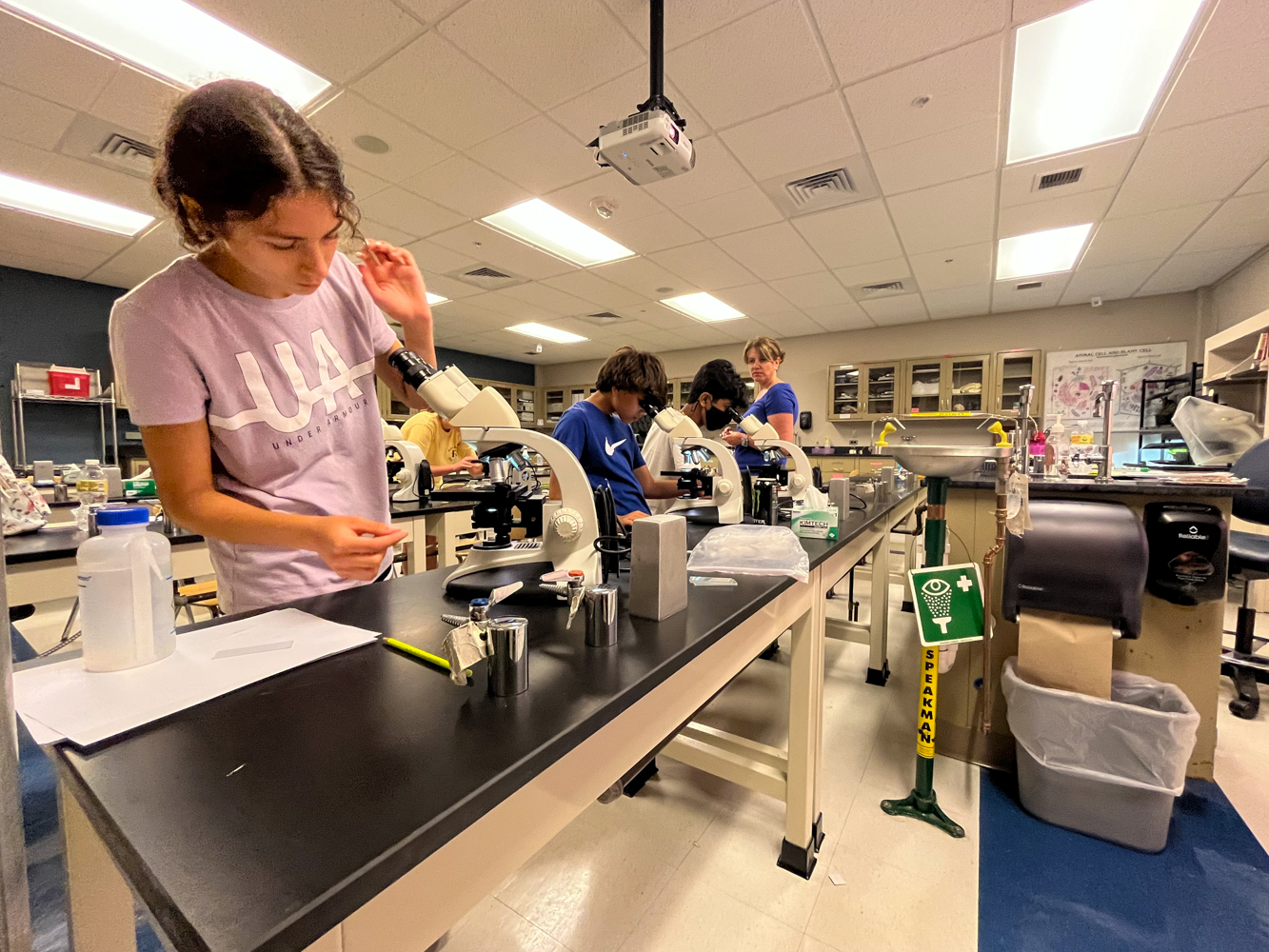 Here’s one way to keep the attention of a class of teenage campers: designate one of them as a “killer” and the rest as prime suspects and make the class figure out whodunnit.

That was the assignment this week in a Delaware Technical Community College summer science camp, which plays on the popularity of television’s many crime shows that focus on forensics.

Instructor Kelly Palaisa set the scene for her class.

A 15-year-old student at Delaware Technical Community College pushed someone off the stairway, killing him and leaving a mess of blood, she told them.

Their first job, she said, was to examine blood spots and hair left at the scene.

Students ran towards the microscopes to examine the evidence.

Campers will use them to identify fingerprints, analyze blood types, test hair follicles, examine evidence, and, hopefully, identify the “killer” among them.

“They really make learning fun with their creative sessions in the camp,” said camper Anjali Chakrabertti. “Teaching us like this is a cool alternative to showing us how scientists use this genetic information to detect criminals.”

Chakrabertti, a 10th-grader, said she wants to work in biology when she’s older.

She signed up for the science camp to continue on with her learning from the school year and grow her skills for when she returns to the classroom in the fall. 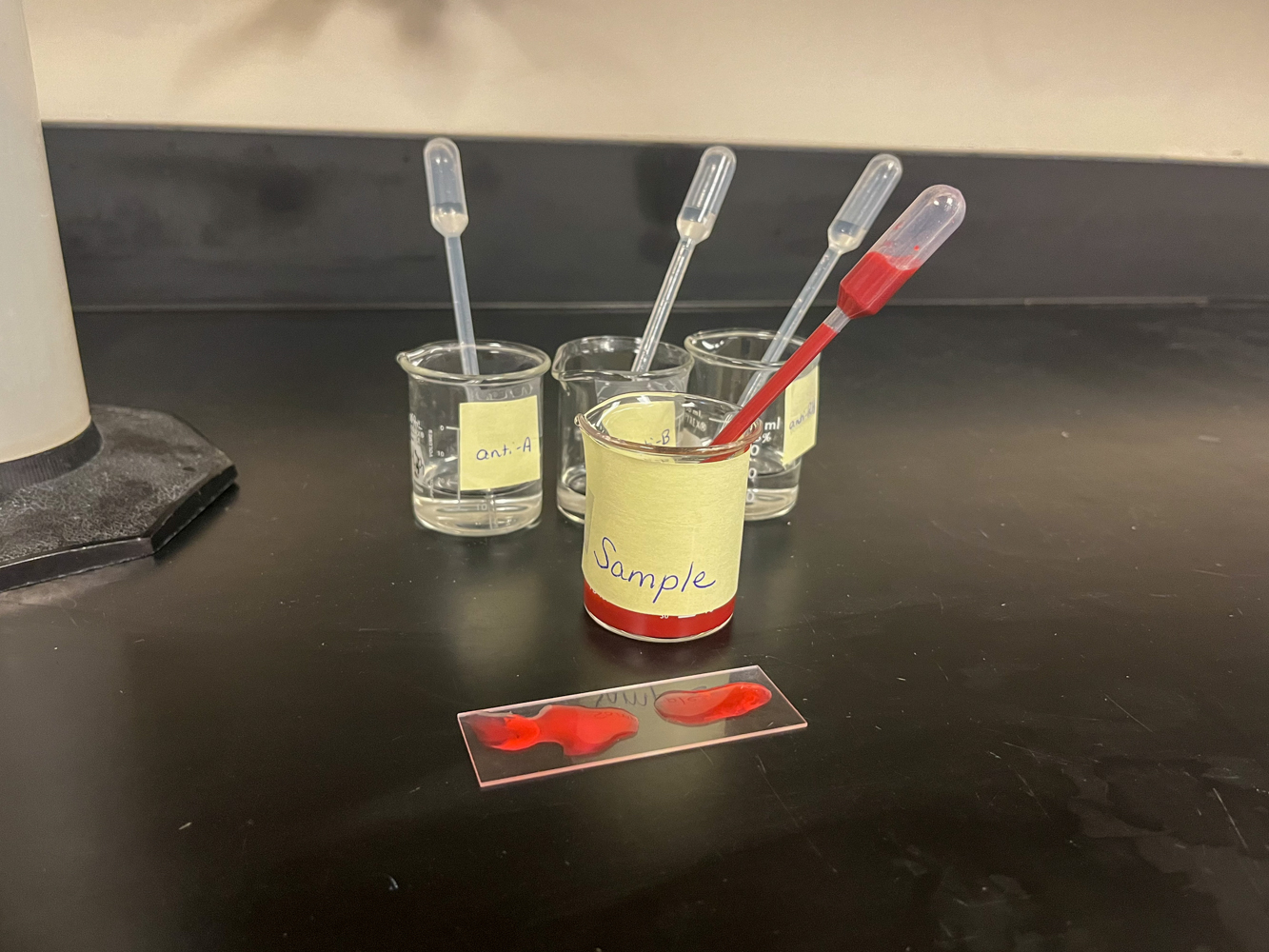 Del Tech’s science camp is part of their Fusion Camp, which is a 10-week program that kicked off in 2004. It’s a mashup of cooking, science, art and sports sessions. This year’s camp runs from June 21 to Aug. 19.

They also offer a “Messy Camp” where participants learn about acids, bases and density.

For the food lovers, Del Tech has “Messier Camp” where students get a chance to learn things like food polymers through experiments in sessions like “Kitchen Chemistry.”

An example of this would be the starch in potatoes or corn.

The science camps usually cost  $199 per week. Free virtual science camps and scholarships to the fusion camp are available through funding from a National Science Foundation EPSCoR Grant and the state.

The Summer Science Academy, aka the science camp within the fusion camp, is funded by DelTech’s sponsors of the New Castle County Science Fair.

Related: “Camp Lenape: A family of fun for orthopedically disabled“

“Right now I don’t know what I’m gonna do, so opens my mind to things that are out there,” said ninth-grade camper Aarush Sedama, “like forensics and learning about the brain and stuff about neurology and about dementia, so the camp opens up new fields that I could possibly have a career in.”

Palaisa, the instructor of the science camp for the past two years, said the campers benefit from being on a college campus because they have professional equipment and expert instructors at their disposal, which they typically do not have in their middle or high school classes.

“I love when the students are really excited about science,” Palaisa said. “That’s the most important part – I always try to say science is fun. In the classroom they’re getting preached to but I think if they’re involved it makes it more interesting and exciting for them.”

Palaisa is a self-proclaimed science nerd, and teaching the science camp allows her to create sessions that compliment her expertise.

“I’ve centered the lessons on my specialties, so brain and neuroscience was our first day,” she said.

That day, the campers learned about neurons, and how they connect with each other and are affected by healthy habits like exercising and eating right.

The real-world connection is key for the campers to come away from the science camp with deep and retained knowledge, Palaisa said.

While the camp has touched on the same fields the past few years, DelTech is always looking to evolve in order to meet the demand for specific skills.

“As society changes and the needs of students change, the campus and its camps are going to go along with that,” said Tracy McMillan, program manager for youth camps. “Science changes, and if we can enhance our science programs to benefit the students taking or participating in a science program here, we’re going to do that, as well as opening up new art experiences.”

The science camps continued to operate throughout the pandemic, although attendance did take a dip.

In previous years, the program could see hundreds of students participate.

This year, there are around 40 campers.

McMillan believes these numbers will start to bump back up as parents become more comfortable sending their children away and the camp evolves its programs.

“It helps parents in that they don’t have to worry about their  child for at least 10 weeks out of the summer,” she said. “So parents get a chance to have a place to send their kids, and children have an opportunity to experience things that they may not normally experience in school.”

Campers have the choice of attending a few days a week, a full month, or the whole summer.

“I’ve been lucky enough to see the relationships formed at this camp,” she said, “and there are kids who view the counselors as family and have been coming here since they were 5 years old.”