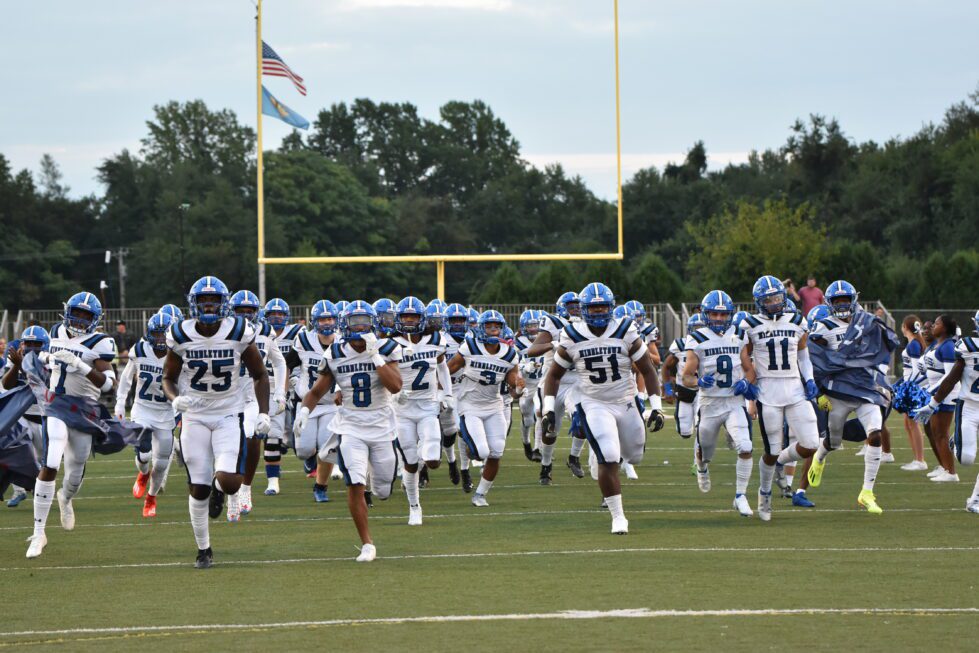 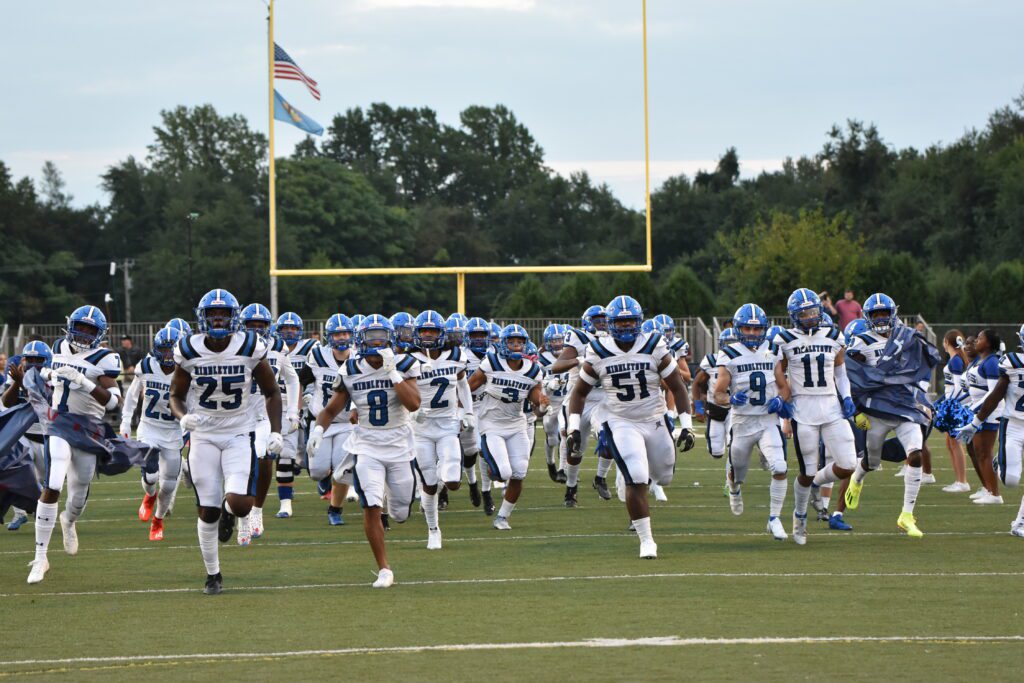 Middletown Football team running out on the field, photo by Donnell Henriquez

Last year the DIAA re-classified football into three groups of schools with Class 3A containing the 11 largest programs from the previous Division I.

All 11 qualified for the state tournament as Middletown captured its first title since 2012 with a 28-22 win over Smyrna.

Many feel those two will meet again in this season’s championship game, but there are a few teams that could challenge the Cavaliers and Eagles for the top spots.

The Delaware LIVE Weekly panel of seven voters cast their ballots for the preseason Super 7 in Class 3A, as the football season gets underway this week.

Here are our Super 7 Class 3A picks:

No.1: Middletown gained all seven of the first place votes from our panel as the defending champs return most of the offensive line for running backs Michael Pearson and Josh Roberson. Pearson gained over 800 yards rushing last year while Roberson added 700. Ty Hynson and Noah Kracyla return at wideout, but Middletown has to fill the vacancy at quarterback as Braden Davis graduated and has joined fellow Delawareans Debo Williams (Smyrna) and MarShawn Lloyd (Wilmington – Dematha HS) on the roster at South Carolina. On defense, the Cavs graduated the starting down linemen, but returned stellar linebacker Jaden Wheeler along with D-backs Pearson, Hynson and Dru Beckford. Middletown has a daunting schedule, playing three powerhouse programs all on the road, St. John’s of D.C. on Sept. 3, Washington High (Ohio) Sept. 30 and IMG-Florida Oct. 28.

The Cavaliers will face off against Smyrna in the annual Harvest Bowl on Sept. 16. That will be Delaware LIVE Sports’ Game-of-the-Week, powered by 302 Sports.

No.2: Smyrna also has to replace its quarterback as Cameron Edge declared for early graduation and is now at the University of Maryland, joining Dante Trader (Delmar). There were 3 players vying for the starting job at QB with the nod likely going to senior Brian Wright. The Eagles will be enjoying the talents of Yamir “Ya-Ya” Knight at wide receiver, and as the wildcat QB. Yamir is the final Knight brother to play football at Smyrna, following Wayne (JMU), Will (all-time rusher in state history) and Wade. There has been a Knight on the Smyrna football team since 2012. The addition of transfer Markell Hohlman will boost the rushing attack. Hohlman was 1st team All State last season at William Penn.

The Eagles return most of their defense including Nate Chandler, Julian Charlsecar, Brandon West and Caleb Blane up front, along with linebackers Cole Moyer, Stephen “Truck” Driver and Nazir Jenkins. 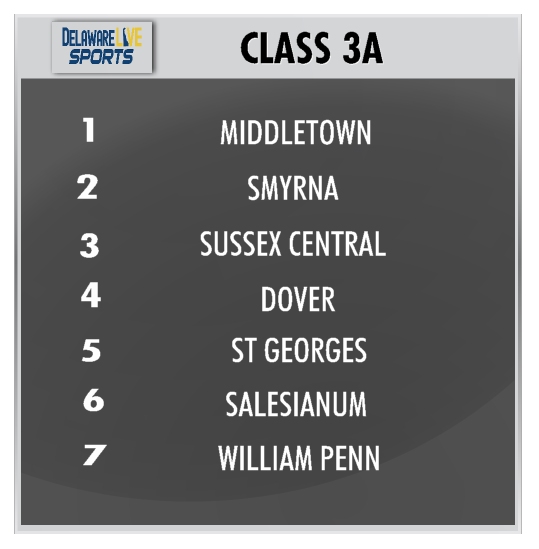 No.3 :Sussex Central finished 7-5 last year after falling to Salesianum in the playoffs. Coach John Wells returns a good stable of running backs in P-J Henry, Andrew Long and Kris Shields. The Golden Knights wing-T offense should excel this year with an experienced group in the trenches led by center Colin Tucker, Tyler Buttridge and Anthony Taylor. The Knights also have one of the state’s best kickers in Ibrahim Leyva-Fojaco. Traditionally this team is always a solid-swarming bunch on the defensive side of the ball. Henry, Shields and Long also play in the secondary, while Kevon Moore-Briddell and Kyle Custis set the edge.

No.4: Dover impressed last season under 1st year head coach Chip Knapp. The Senators completed a 7-5 campaign after losing to Smyrna in the semifinals. Knapp, who spent 33 years on the staff at Wesley, has plenty of holes to fill as Dover lost nine starters on both sides of the ball to graduation. The offense will rely on Ja-kwon Kilby and speedster John Parker. Kilby gained over 1,400 yards on the ground, while Parker had 600 yards in receptions. Both will also play defense as well. Tyron Abrams returns at RB and DB, center Jamal Parker has size and experience, plus Brandon Yoder might be the best kicker below the canal.

No.5: St. George’s Tech went 8-3 in 2021. The Hawks lost a heart-breaking 9-7 quarterfinal to Dover as Yoder booted a field goal late in the game. Dual-threat Donovan Brooks returns at QB along with his center Daa’on Cooks and Amir Selby (OL), running backs Terry White and Tre Hinton as well as talented receivers Kwame Miller and Jamie Righter-Hartman. This team has good size and speed and could easily vault to the No. 3 spot in our Super 7 with the right breaks.

No.6:  Salesianum lost to Middletown in the semifinals last year and was one of only two teams to play all of the other 10 schools in 3A. The Sals return a solid group led by Nate Ray (TE / LB), running back Andrew Ransome, both kickers in punter Aidan Montgomery and PK James Collins. Coach Bill DiNardo has a solid nucleus on both lines and a lot of overall team speed. Leading the team up front will be Ray, Josh Urban, Joe Rubino, Ahmaad Foster and Andrew Semmel. Salesianum has not secured a state title since 2013 and if Middletown, or Smyrna falters, look for the Sals to be in the mix.

No.7: William Penn edged out Appo, Hodgson, Cape and CR for the final preseason spot in our rankings. The Colonials compiled a 6-6 record last season for coach Matt Sabol. They lost all-state running back Markell Hohlman as his family first moved into the Caesar Rodney district following the Fall semester, then over the summer moved to the Smyrna district. Penn will have Jayden Bowers returning at linebacker and offensive guard. Handling the ball for the ground game will be Kafian Taylor.

In the second year of the new three-tiered classification system, only the top eight 3A programs will qualify for the playoffs.

In this opening week of play, we will feature Dover, Sussex Central and William Penn in our livestreams. Please follow us to keep updated on our live broadcasts, and Delaware LIVE Weekly shows that will include Top Plays and the Super 7 rankings for all three classes.