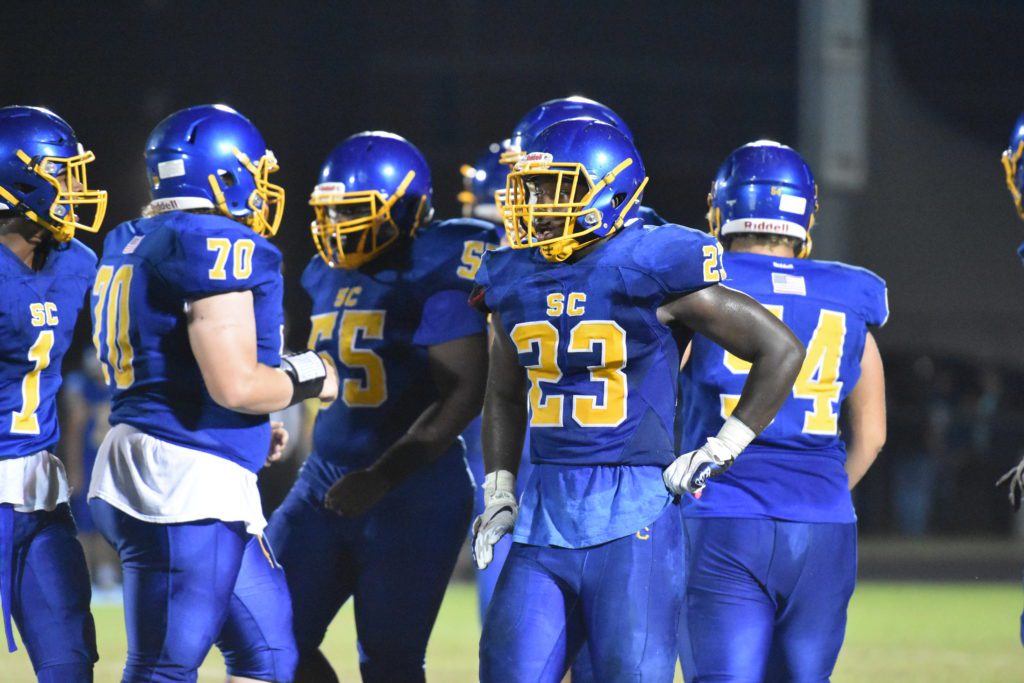 This year’s game was a tale of two halves as the Golden Knights jumped out to a 21-0 halftime lead, but the Vikings controlled the second half scoring twice while holding the Golden Knights scoreless. In the end Sussex Central prevailed 21-14 in the Class AAA District 2 game.

The Golden Knights amassed 238 total yards in the first half with 185 coming in the run game.

“The way we came out in the first half, you can’t draw it up any better than that,” Sussex Central coach John Wells said.

Sussex Central took the opening kickoff and marched down the field on a 14 play 68 yard scoring drive capped off by a one yard run by P.J. Henry. Juan Justiniani added the kick to give the Golden Knights a 7-0 lead.

“It was all effort tonight, we showed everybody that we could come out and play as a team tonight a get the dub,” Henry said.

After a turnover on downs by the Vikings, Sussex Central mounted another long scoring drive going 70 yards on 12 plays for nearly six minutes. Quarterback Zamir Gardner scored from the six yard line on a bootleg diving into the endzone. Justiniani’s kick was good and the Golden Knights led 14-0 with just 2:45 to play in the first half.

On the ensuing drive, Sussex Central would force a three and out with Wells wisely using his timeouts to get the ball back with 1:33 to play in the first half. On the first play Gardner dropped back off of play action and hooked up with Henry who made a leaping catch and dove into the endzone for a 37 yard pass play. Justiniani was good on the kick and the Golden Knights would take a 21-0 lead into halftime.

Cape Henlopen’s offense would find life in the second half with a 13 play 56 yard scoring drive to start the third quarter. The drive was extended when the Vikings faced a fourth and 12 at the Sussex Central 44 yard line, quarterback Hank D’Ambrogi was pressured as he rolled out, he tucked the ball and ran for a 20 yard gain giving Cape Henlopen a key first down in the drive.

Cape Henlopen scored later in the drive when D’Ambrogi connected with Odin DeLazaro over the middle on a six yard pass play. D’Ambrogi added the point after kick as Cape Henlopen cut the lead to 21-7 with 7:32 to play in the third quarter.

Cape Henlopen forced a punt on Sussex Central’s next possession and the Vikings would take over at their own 26 yard line. Cape Henlopen appeared to cut into the lead early, but Chancler Johnson’s 25 yard run into the endzone was negated by a holding penalty.

Cape Henlopen continued the drive and faced a second and one from the Sussex Central 11 yard line. Daniel Saez went up the middle and appeared to be going into the endzone when the Golden Knights Joey Finney stripped the ball from Saez at the one yard line and returned it to the three yard line.

“Play of the game right there, he did the same thing last week at Dover” Wells said.

Cape Henlopen got the ball back with 3:32 to play in the game when Nathan Horn shot through the line and stopped a Sussex Central drive on a fourth and one at the Cape 12 yard line.

The Vikings put D’Ambrogi in the shotgun and went 88 yards in 2:05 scoring on a 14 yard pass from D’Ambrogi to Maurki James. D’Ambrogi completed six of six passes on the drive and ran for three first downs on the drive. D’Ambrogi’s kick was good and with 1:27 left to play Cape Henlopen trailed 21-14.

Sussex Central was able to run out the clock and get the 21-14 win.

“Give credit to Cape Henlopen they owned the second half, that team there is going to be a scary team to play in the playoffs,” Wells said.

Henry led the Golden Knights with a pair of touchdowns. He rushed for 50 yards on 12 carries and caught a pass for 37 yards. Kris Shields was the workhorse for Sussex Central carrying the ball 23 times for 140 yards. Andrew Long had 83 yards on 14 carries. As a team the Golden Knights amassed 324 yards of total offense, Cape Henlopen had 245 yards.

D’Ambrogi completed eight of 12 passes for passing yards and two touchdowns, he also rushed for 58 yards on ten carries.