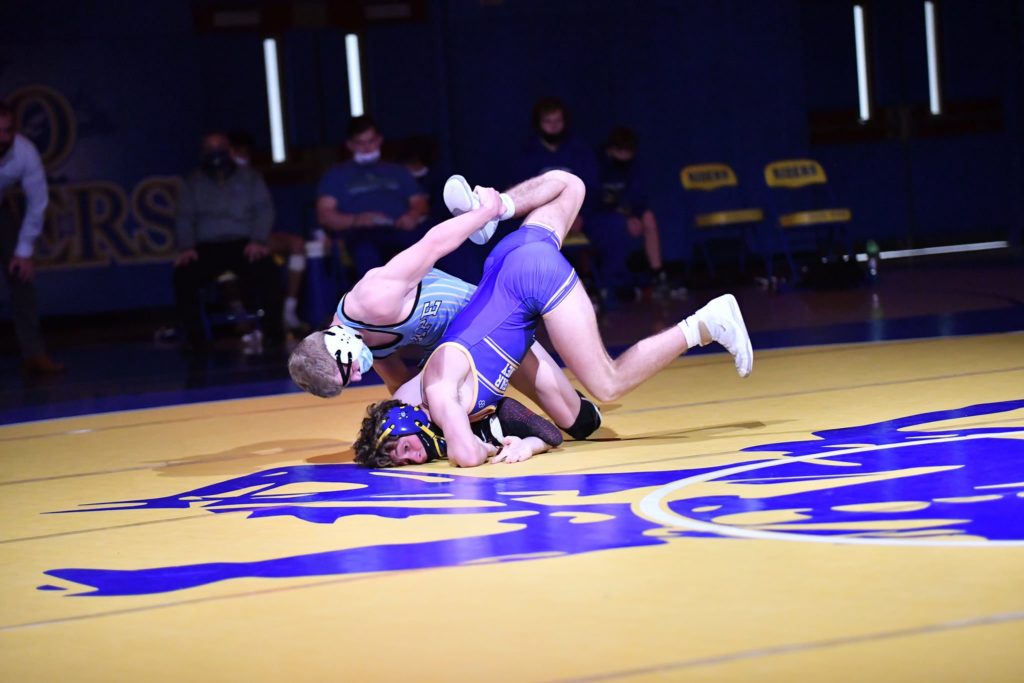 Cape Henlopen starts the season as the number one ranked team in Division I.

“It is obviously easier to be the hunter rather than the hunted so we are in a different and unique situation. We have taken the mindset that we are out to compete and everyday is an opportunity to compete,” Cape Henlopen head coach Chris Mattioni said.

The match began at 160 pounds where C.J. Fritchman and Carson Kammerer got the Vikings out to a fast start with a pair of first period pins at 160 and 170 pounds before the Riders D.J. Baker responded with a pin at 182 pounds.

“Starting the match at 160 was good for us with C.J. there, from 145 up is the meat of our lineup and we are going to compete with anybody in all of those weight classes,” Mattioni said.

Alex Taylor recorded a pin at 195 pounds to give Cape Henlopen an 18-6 lead. The 220 pound bout featured two of the states top ranked wrestlers between Cape Henlopen’s #2 ranked Dalton Deevey and Caesar Rodney’s #4 ranked Josh Dyer. Deevey jumped out to a 4-1 first period with a takedown and cradle for two nearfall points. The two traded escapes to start the second and third period before Dyer scored a takedown late in the third period giving Deevey a 5-4 decision.

“That was a good test for Dalton, Dyer is a tough wrestler and Dalton was able to get out to a fast start and get a big win,” Mattioni said.

Lucas Ruppert rounded out the upperweights with a pin in 5:42 at 285 pound as Cape Henlopen extended their lead to 27-6.

Alex McEvoy stopped the string of Cape Henlopen victories with a 19-4 technical fall at 106 pounds followed by Cole Moffett’s 8-2 decision at 113 pounds as the Riders closed the score to 27-14.

The Vikings got back to back pins from Holt Baker (120) and Josh Wright (126) and extended their lead to 39-14. The Riders answered with a pin from M’Ja Smith at 132 pounds followed by Cameron Cataldi’s 7-4 decision at 138 pounds.

Cape Henlopen ended the night with a pair of pins by Mikey Frederick (145) and Luke Bender (152).

Both teams will compete at the Beast of the East on Saturday and Sunday. Cape Henlopen will travel to Caravel Academy on Wednesday, December 22 for a dual meet that will be livestreamed on Delaware Live Sports.