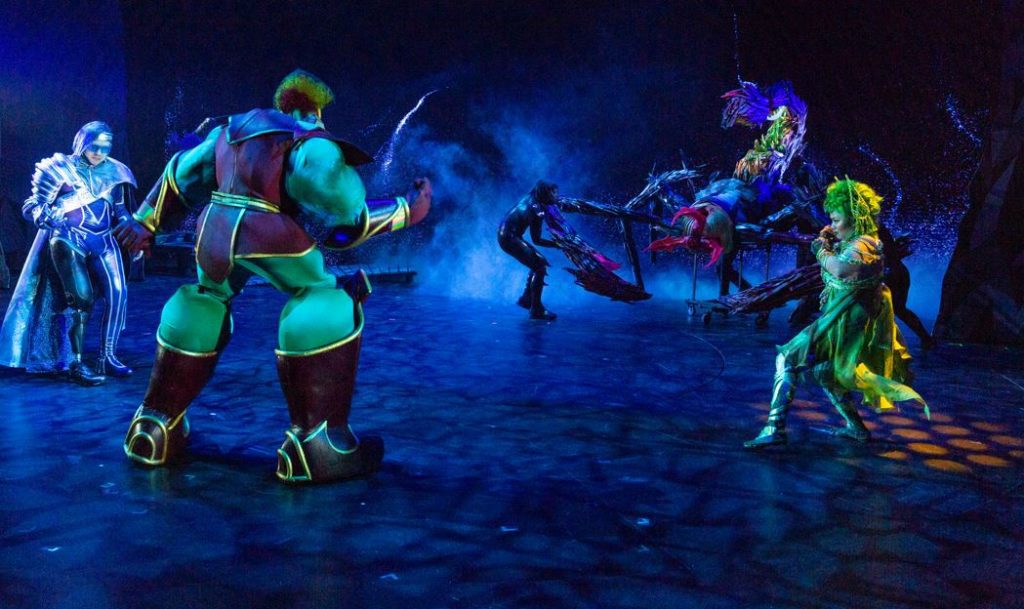 Much of the action in Delaware Theatre Company’s ‘Other World’ takes place inside a video game, hence the hero avatars and puppet scorpion. Photo by Matt Urban/NuPoint Marketing

Delaware theatergoers have a choice of two spectacular performances this week, one in Newark and one in Wilmington.

Both “The Blue Door” by the University of Delaware’s professional Resident Ensemble Performers  and Delaware Theatre Company’s “Other World,” a musical making its world premiere, offer enthralling performances and breathtaking sets.

“The Blue Door,” which ends Sunday, is the first indoor performance by the University of Delaware theater since the COVID-19 pandemic began in March 2020. It follows a single sleepless night in the life of a Black mathematician whose wife has left him because he wouldn’t join the Million Man March in Washington, D.C.

Sanford Robbins, producing artistic director of the ensemble players, said the play was chosen because its subject matter is timely, considering the national discussions on race, and it was a smaller show, with two actors and a single set.

“It was so easily producible because we were coming back after two years, and with a much smaller staff than we had,” he said. 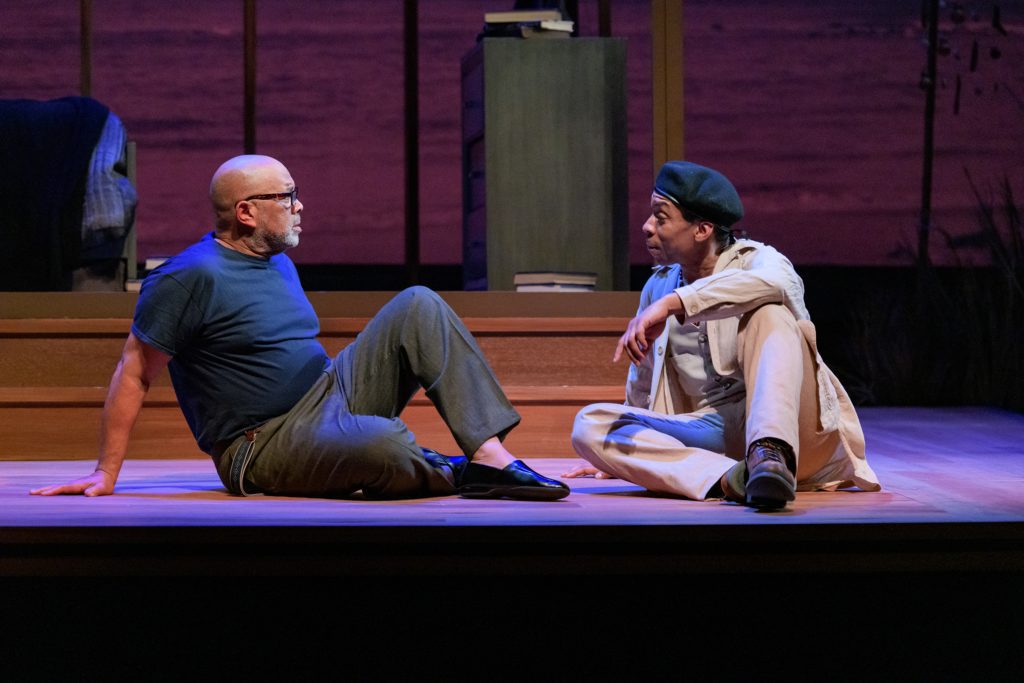 “Other World,” which ends March 20, is a fantasy about a gaming addict and a gaming hater who are mysteriously transported into his favorite game and have to play their way out. The look of the show — which includes a dragon, three-story tall costumes and more — evolved from early concept art created by Wētā Workshop, the same company that did the special effects in “Lord of the Rings’ and “Avatar” movies.

Its cast is deliberately diverse in both ethnicity and abilities, yet the show never comments on that.

“Other World” is the third of Delaware Theatre Company’s indoor season, and Managing Director Matt Silva said he hopes it will help develop new audiences.

DTC discovered the show at read-throughs in New York City more than two years ago.

Theaters talk a lot about new audience development, but continue to show the same old dead white man productions or pat themselves on the back for including a more modern piece written by and featuring people of color.

“Other World” explores the ideas of community, life balance and more set against the gaming world. It’s a brand new idea ripped from modern trends, but reflecting a lot of issues and viewpoints, Silva said.

“If we want to talk about new audience development and reaching out to our community and building community programming, something like this is really important to do,” Silva said.

The delight Saturday night of the kids sitting on the front row gaping at a giant puppet dragon stretching off the stage over their heads, couldn’t have underscored that better.

Both shows also involve performers with Broadway pedigrees, actors playing multiple roles and sets that suck you in. Both those sets make marvelous use of video technology.

In “The Blue Door,” Stephanie Hansen has created a Zen sandbox of a set that contrasts the emotional action on stage. A rustic looking four-poster bed to the left serves as the bedroom for Lewis, the professor whose White wife has left him. It appears to be open out to a sandy beach dune.

Behind them, a screen stretching across the stage offers a mesmerizing night view of the ocean, complete with clouds and low, rolling waves coming toward shore.

In “Other World,” the combination of video technology, rolling scenery and often dazzling costumes wonderfully creates the various realms of the game.

REP troupe member Hassan El-Amin plays Lewis and says he discovered Tanya Barfield’s play, which debuted in 2007, while searching the internet for something appropriate to reopen the theater. The show is directed at The REP by Akin Babatundé.

As Lewis details his life, he also becomes various characters, including his wife, father, mother and peers.

Actor Will Cobbs, fresh off Broadway’s “Is This a Room,” plays dozens of his ancestors and many of the people in their lives. Cobbs and El-Amin worked together in REP’s recent “Fences.”

Between the two actors, the audience meets characters from the days of slavery to now, with the show deftly moving from comedy to terrifying tragedy, and back.

“I love the fact that these two actors on stage are bringing to life an entire world and journey from the inception of the family coming to America, all the way up to me present day,” El-Amin said. “It’s really bringing color and dimension and clarity to the picture and the journey of Lewis’s life.”

El-Amin says he looked no farther than his own home for inspiration for a key character.

“I played my real wife,” he said, laughing. “Mannerisms, voice inflections, that’s exactly where I got it.”

That detail did not go unnoticed when she went to see the production.

“She was like, ‘Is that me,” he says, dropping into her voice.

The play breaks the fourth wall, and does it in hilarious ways. But the audience breaks it back. On Sunday, audience members could be heard gasping at some moments and commenting out loud.

El-Amin said he and Cobbs love that.

Charnette Batey, who plays the Other World goddess Temula, also feeds off the audience’s reactions, especially as her character realizes it can step away from her programming.

“But it’s kind of like more of an energy thing,” she said. “You can kind of feel them leaning in sometimes you can hear people go ‘yeah,’ go,’ ‘get it’ or ‘nice’ … They’re focused and they’re on the ride with you. I can feel that.”

The show was supposed to premiere in Bucks County in March 2020, but never made it to opening night because of the pandemic. About half the original cast remained, Batey says.

It wasn’t hard to pick up the beat because the writing and the team putting it together made it easy, she said. That included the idea of a diverse cast featuring actors of different abilities.

“Each of our individual gifts and what we bring to the table as artists is celebrated here, and that’s what happens when you let the light within you really shine and don’t try to mask it or cover it up, put it into a box,” Batey said. “It’s magic and I think they did a really, really great job of constructing a show that celebrates our artistry and what we bring,”

“Other World” is perfectly suited for now, she said.

“We’ve all had our two years to kind of stop and think about what kind of programs or what kind of structure we’ve been living under and is that really how we want to walk through life, is that really who I am,” Batey said. “This is a show where at least my character gets to kind of strip away that programming and strip away that structure and lead from her heart instead of being so caught up in the things around her.”

Audiences are responding to both shows.

“The Blue Door” ticket sales have increased as the production has gone on, Robbins said. Last Sunday there were few empty seats.

Silva said many families and younger people are starting to buy tickets as theatergoers who have seen the show spread the word about “Other World.” It’s directed by Adrienne Campbell-Holt, with book by Hunter Bell and music by Jeff Bowen and Ann McNamee.

Delaware Theater even invites people to cosplay and come as their favorite character, which one woman did on opening night. Cosplayers should remember it’s an all-ages show and dress appropriately. They also must leave weaponry at home to ensure the theater a safe zone.

“Other World” is likely to be performed again, and some would like to see it rise to Broadway. Regional directors and New York theater owners have been checking it out.

Bring a mask: Both theaters still require vaccination cards, IDs and masks to enter. UD also requires people to take a health check on their phones or with an usher.