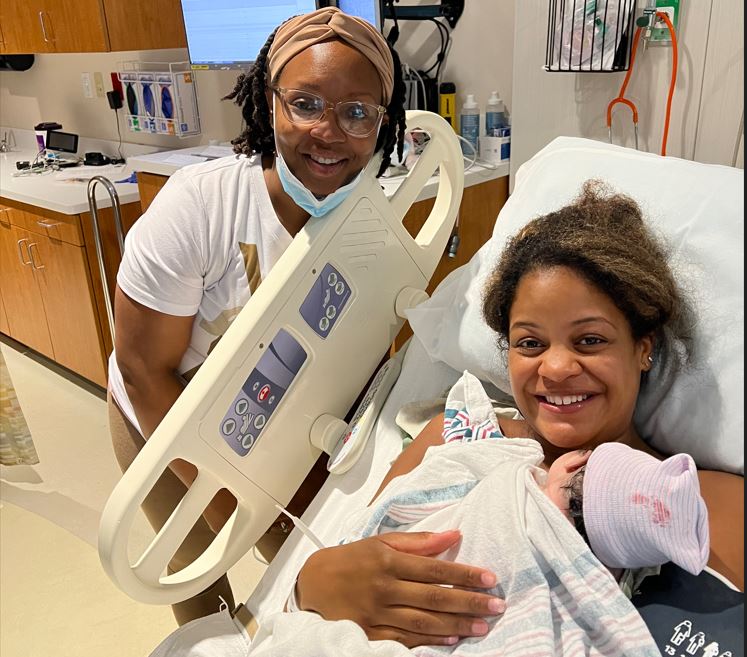 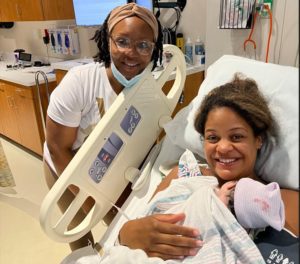 Adrienne Dawson’s breathing was becoming erratic and panicky as her contractions increased while she labored last month with her first child at Christiana Care.

Doula Ariandra Clark leaned over and rested her hand calmly on Dawson’s chest, and they looked into each other’s eyes.

“Calm down,” Clark said kindly. If Dawson kept breathing like that, she would pass out, Clark told her.

Dawson relaxed a bit, began controlling her breathing better and a little while later welcomed her daughter, Brynn-Leigh.

It may not sound like much, the Dover mom said, but that brief touch illustrates the emotional and physical value of having  a doula in the delivery room.

“That was a pretty special moment,” Dawson said.

What a doula does

A doula works as a pregnancy and labor assistant of sorts, providing information as well as physical and emotional comfort before, during and after birth.

Doulas don’t provide medical care of any kind or accompany patients to medical appointments. But Delaware hospitals and birthing centers welcome them as a member of the delivery team who is focused on the mom’s well-being.

That can be especially important to people of color, said Erica Allen, a doula whose nonprofit Do Care Doula  Foundation Inc. is sponsoring a doula training Aug. 20-21 for Black doulas.  Classes will be taught by Birth Arts International with trainer Ashanti Rivera coming from Connecticut.

One reason Allen wants to focus on people of color is that Black mothers in Delaware are 52% more likely to birth a preterm baby, according to the March of Dimes.

“The training that we provide teaches our Doulas how to support birthing people/moms through pregnancy, childbirth and their immediate postpartum,” Allen said. “We go over nutrition, evidence-based research of medical conditions that may require lifestyle adjustments, birth plans, comfort techniques for labor, breastfeeding support and so much more.”

So far, her program has assisted in more than 30 Black births.

While some doulas can be paid up to $1,000 to handle a birth, many of the moms don’t have to pay because the state and others have given grants to doula programs to increase the care for moms.

A friend recommended Clark to Dawson, who says she would “10 out of 10” recommend having a doula. 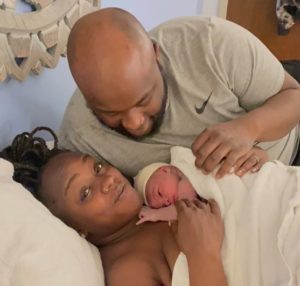 A water birth for baby No. 3

So would Talaya Hayes of Dover.

In her first two pregnancies, she only wanted her husband in the room because she felt like so much chaos surrounds a birth.

She realized, though, that her husband was having his own parental experiences and she wanted him to be able to enjoy the moment without having to focus on her.

She thought the family couldn’t afford a doula, but was told by a friend on the Moms of Delaware, or MOD Squad, Facebook page that she might qualify for one of the grants.

Like Dawson, Hayes talked to several doulas before settling on the one she used, a practice encouraged by doulas to ensure a good relationship.

Hayes’ search was simplified somewhat because she was having her baby at The Birth Center in Newark, and they required doulas to be vaccinated. That limited the pool a bit.

She liked Morgan Watson partly because Watson had children the same age as Hayes’ kids, so they had a lot of mom stuff in common.

Hayes had an epidural with her first child but a natural birth with the second. For the third, she wanted to have a water birth.

However, hours into labor, she didn’t know if she could go through with it.

Morgan helped her get into other positions to relieve stress and pain. She walked with Hayes in the halls and up and down steps, reminding her to breathe and assuring her she could do it.

When Hayes seemed ready to give up, Morgan suggested she take a warm shower and see if the water relaxed her. Morgan even got into the shower with her to rub her back and comfort her.

As soon as Hayes was out, a nurse checked and told her that if she wanted a water birth, she better be getting in the tub.

This week, Morgan and her kids came over for a play date. 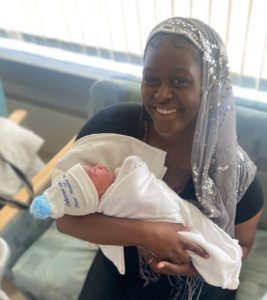 Doula Joneigh Pollard holds a newborn whose mom she helped give birth.

Doula Joneigh Pollard had long had it in the back of her mind that she would like to work with women giving birth. Her previous jobs had included customer service and being an herbalist.

Then she saw a post on Wilmington Councilwoman Shane Darby’s Black Mothers in Power website about an all-Black doula class. Allen’s group had a grant to train 10 doulas at no cost to them, but only for Kent County.

That’s where Pollard wanted to practice.

Allen said in a press release that her organization has received funding from Highmark, Walmart, Wawa and others to train and pay for doulas.

She is applying for more grants and hopes to receive more donations, sponsorship and community support to help lower Black birth disparities.

“In 2022, in the United States, with all of the medical advances that have been made in so many areas, it should not be common that Black women face avoidable negative outcomes as serious as death of themselves, their babies, or both in relation to  pregnancy, but it is a sad reality,” she said.

Pollard has been a doula for a year now. It’s been her only job and it pays the bills.

She typically meets with clients every other month leading up to the birth month.

She answers questions about what their bodies are doing, talks to them about their diet and helps them plan for the birth. She will attend the birth, with her job ending when the mom goes to her postpartum room.

But Pollard also stays in touch for a few weeks after the birth.

Pollard has liked it so much and found it so meaningful that she’s now in midwifery school and wants to become a certified lactation consultant. That’s meant she’s had to reduce the number of clients she can accept as a doula.

But it keeps her goals front and center. 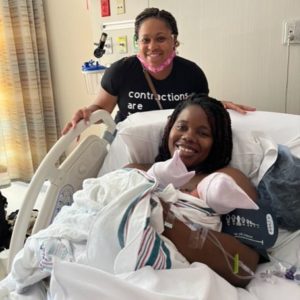 Black doula Christina Boyer with a mom who gave birth to twins.

Doula Christina Boyer had always been interested in being at the births of family members.

Then in 2018, one of her cousins lost her baby at 20 weeks and had to give birth anyway. Boyer left work to be with her.

Her husband’s cousin was there, but obviously grieving, too, and Boyer devoted herself to helping her cousin.

“She needed somebody to be present and say, ‘It’s going to be OK,'” Boyer recalled.

Boyer decided that day she had to find a way to serve women who were pregnant and help them through the process. A native of Delaware and graduate of Dover High School, she had been working in retail sales and management.

“It’s near and dear to my heart, of course, to serve communities of color because I am a part of that community,” she said.

She knows what she needed when she was pregnant and believes doulas can help women of color better navigate the system.

“Sometimes having that extra advocate, that extra set of eyes and ears is really, really necessary,” Boyer said. “I do serve anyone, but the majority of my clients have been members of the BIPOC (Black, indigenous and people of color) communities.”

She now is earning a bachelor’s degree in maternal and child health with a concentration in lactation studies. After she graduates, she will will take lactation training classes and sit for the international board exam.

She plans to establish her own practice as a lactation specialist rather than joining a hospital or birthing center staff.

Boyer cries at every birth, she said.

“It’s a very, very special thing to see a mom making the transition from just a single person only responsible for herself to becoming a mom,” she said.

Her job has helped her cope with the recent death of her own mother.

“Seeing someone birth a child, seeing a new life coming into the world is gratifying,” she said. “It’s special. It’s sacred. That’s the piece that gives me the most joy.

If you’d like to support the Do Care Doula Foundation, checks can be sent to P.O. Box 472, Smyrna, Delaware, 19977 or cash via Venmo @docaredoula.