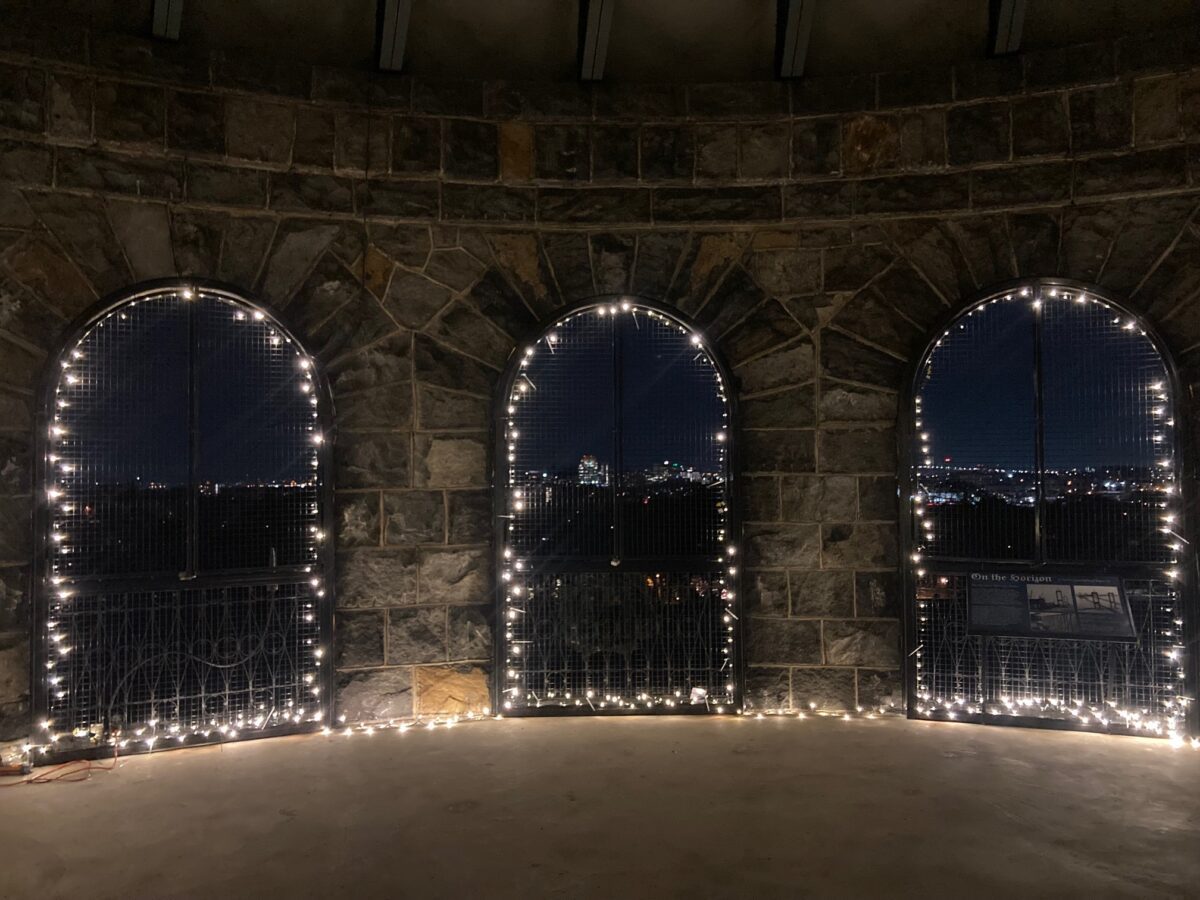 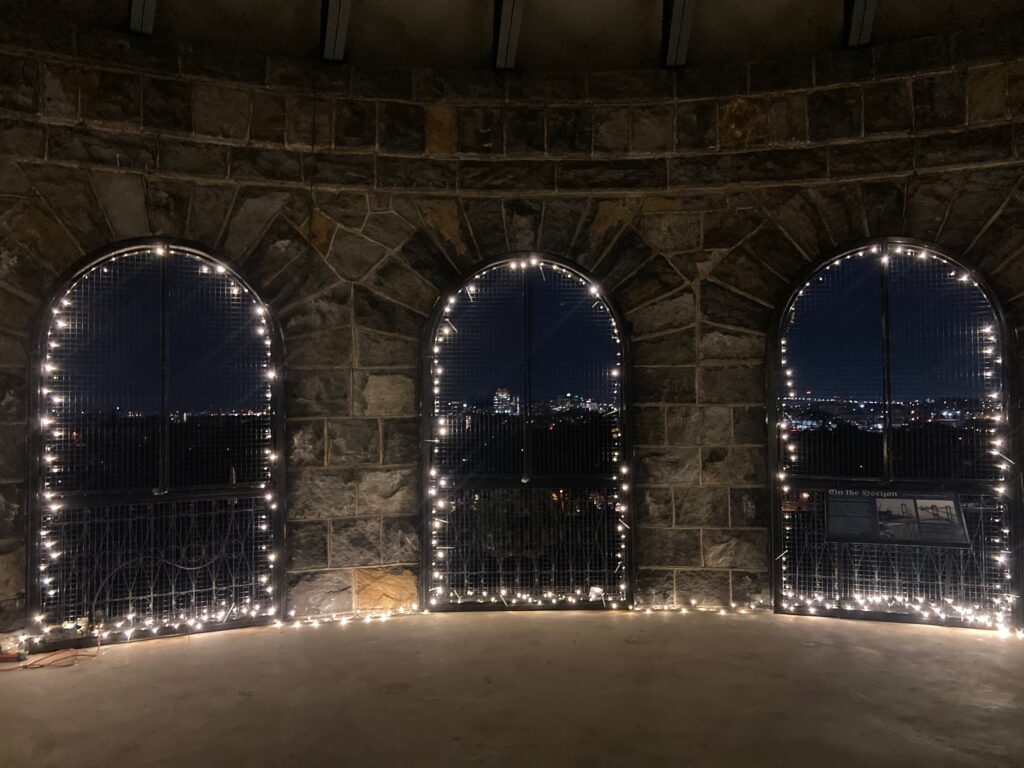 14 of Rockford Tower’s 16 windows are lit in gold lights for the holidays; this view shows the city from inside the observation deck. Photo by Nathan Field

For the first time, Rockford Tower is lit up for the holidays.

Fourteen of the tower’s 16 windows have been trimmed in gold lights and will stay lit into January, says Wilmington City Councilman Nathan Field, who not only masterminded the effort but helped string lights, too.

The other two windows were not near the staircase and would have been difficult and unsafe to reach, he said.

The lights have only been up for three days and compliments are pouring in on Field’s Facebook page.

“Just beautiful,” wrote Frances Lippincott Van Leeuwen about a photo of the city from inside the tower that Field has posted at the top of his Facebook page.

“I never made it to the top,” Van Leuwen said. “Thanks for the view!”

That view is one of the things that enthralled Field.

“It’s a surreal, almost spiritual experience being up there above everything. It’s so peaceful,” he said. “You look around and you feel like you’re a bird.”

Field said he got the idea from seeing other cities’ landmarks decorated with lights.

“These types of things can add excitement to living in a neighborhood and build up pride about living in Wilmington,” Field said. “I just thought that if you drive past Rockford Park when it’s dark, you have this beautiful tower that nobody sees. So during this cold winter season, why not add the light and energy and allow people to appreciate this beautiful landmark 24/7?”

Rockwood Tower, built in 1903 during the Industrial Revolution to hold water, is an iconic Wilmington structure, Field said.

“I think I could make a pretty strong argument that it’s Wilmington’s most iconic landmark,” said Field, who represents the council’s District 8. “It is so central to the neighborhood.”

The tower sits on a hill in Rockford Park, near the Brandywine River. Today, it’s in an upscale neighborhood that includes the Delaware Art Museum.

Then, the park was meant to offer mill and quarry workers respite from the noise and grime of their jobs. It was created with land donated by the du Pont and Bancroft families.

RELATED STORY: These holiday lights will help you get your glow on

Designed by Theodore A. Leisen, the tower was meant to appear ancient and used both Italian Renaissance Revival and Gothic architecture styles, says a history by Elizabeth Androskaut on the Delaware State Parks blog.

Field said the design and masonry remind him of buildings in Rome.

The stones for the Rockford Tower are Brandywine Blue Rock quarried from along the river or taken from remnant farm walls.

When the tower was being planned, park commissioners had wanted an observation tower built on the same hill, so the two projects were combined.

The tower went into use in 1901, but the observation tower wasn’t opened until 1904 because of worried about an explosion at a du Pont gunpowder facility. 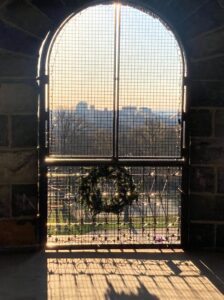 Wilmington Councilman Nathan Field said he also added wreaths to the windows but that they can’t be seen from the ground and he’s rethinking that,

Field said he started his campaign to put up the lights with Kelly Williams, the city’s commissioner of public works. She liked the idea and asked him to talk to Joe Delose at the water department.

Delose and Field met at the tower twice to talk about how to mount the lights safely.

The tower has one power plug, and it’s at the top, so the lighting team had to run an extension cord to the windows.

Lisa Johnson, president of the Delaware Avenue Community Association and Sean Williams, a neighborhood resident, helped string lights on the inside of the windows because it was not feasible to lean out of them.

“There was a learning curve,” Field said. “So if we did it again tomorrow, it would probably only take five hours.”

The windows used about 25 boxes of energy-efficient LED lights, which Field paid for out of his councilman’s discretionary fund.

He has a timer but hasn’t yet mastered it, he said, so the lights will be on until he can make it work.

Field hopes to grow the Rockford Tower display over the years.

Next year, he said, he’d like to add lights to the roof.

“That’s more complex and would be more challenging for safety reasons,” Field said. “It also will take more money and effort to do that.

“But I can see for sure next year adding little details, including some lights to the roof area specifically. I think would look really cool.”