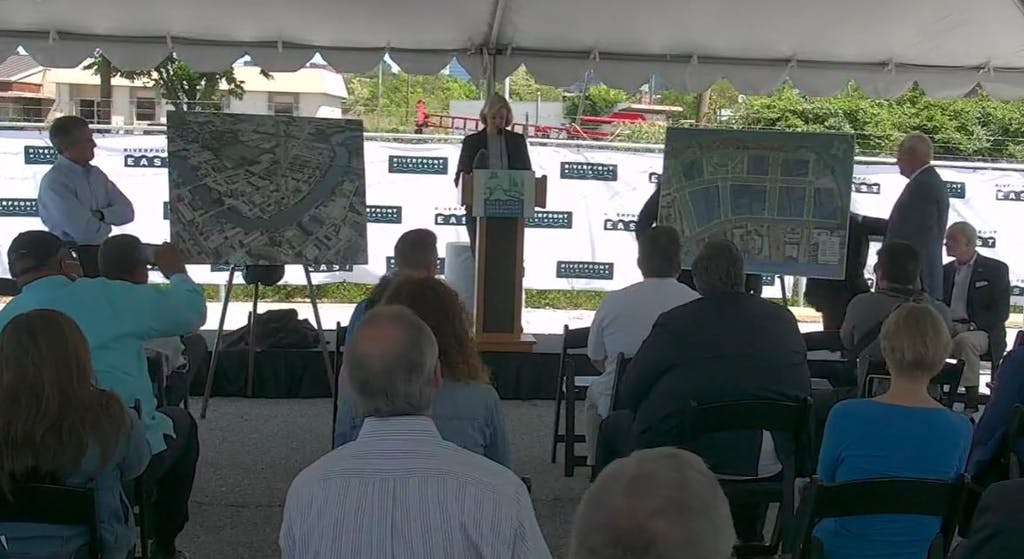 The Riverfront Development Corp. on Friday announced plans for a $100 million, 86-acre expansion of the Wilmington riverfront on the east side of Christina that will include residential, retail and open space.

The company, which spearheaded the development of the West side’s toxic, trashy industrial wasteland into a thriving community, already has bought several parcels of land to start the project.

“Riverfront East is designed to integrate all the key elements to support a thriving sustainable community that is both practical for every day living and inviting to visitors looking for a special experience,” said RDC executive director Megan McGlinchey. “Everything will come together to create the ultimate environment for everyone to live and play.”

“Our ultimate vision is to create one unified and fully accessible Wilmington Riverfront community,” McGlinchey said.

The company is already working with DNREC to clean up every acre, “just as we did with the Riverfront West,” she said. “That way, once potential developers are vetted and approved, the land will be ready for them to get to work in creating the spaces and opportunities we envision.”

She and several government officials talked about how investment and business development is the backbone of a thriving city and community.

The state, city and New Castle County have spent hundreds of millions helping get the West side up and running. That spending was transformational, various speakers said. Prepping the land helped investors and developers make the decision to move in and build, they said.

“Cities either grow or they die. They grow or they die,” Purzycki said. “The power of investment is what’s going to sustain us, and I’m eternally grateful for all the people who supported us over these years.”

Some development on the East side already exists.

The land that both the 76ers Fieldhouse and the Wilmington ShopRite sits on first was bought and cleaned up by the Riverfront Development Corp., Purzycki said. (Chris Kenny, whose family owns the Delaware ShopRite stores, is owner of DelawareLIVE).

The first phase is expected to be finished by the end of 2023 and provide 179 new jobs.

Then, McGlinchey said, “We will have everything in place to make all the opportunities of the riverfront more accessible and safer for auto, pedestrian and bike traffic as well as mass transit.”

New Castle County Executive Mike Meyer talked about how the riverfront projects have helped the area deal with pollution that threatened the area’s well-being.

“Many of you here who are in the private sector know that we talk about the triple bottom line in the private sector these days. There’s people. There’s planet. There’s profit,” Meyer said. “And I often think about that in government. We need to take care of people. We need to make sure we’re sustaining our environment and our land, air and water is thriving into the future. And we’ve got to make sure there’s profit.

“We’ve got to make sure there’s an investment engine to continue to fuel our present and our future.”

The riverfront once was an embarrassment, he said.

“We’ve turned a horrendous liability into an opportunity, something that we are all proud of,” he said. “So that we look at this, and no one questions you today on the East side of the riverfront the way so many questioned the West side  so many decades ago.”