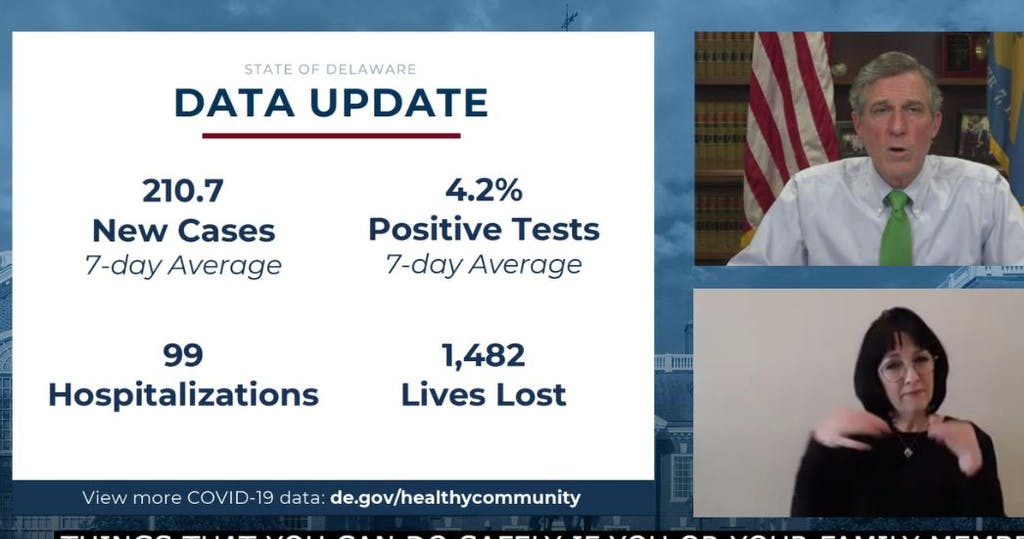 Gov. John Carney’s weekly COVID-19 press conference was far more upbeat than it’s been in months as cases drop and vaccinations rise, leading to questions about when the state will open up the economy and allow more people to be schedule vaccine appointments.

Part of the reason for the optimism on display is that while cases and hospitalizations continue declining, vaccination capacity had been increasing. The state is now vaccinating about 7.000 people in a week, up from 3,000 a week just a month ago.

That’s because the state has more vaccine to put into arms.

“We’ve seen the supply of vaccine increasing. It’s frankly doubled,” Carney said, “more than doubled, I guess, since the Biden administration took over.”

Dr. Karyl Rattay said the state plans to expand its vaccination efforts to the rest of those in phase 1B, which includes workers dealing directly with people or are in environments in which they are not able to social distance. That includes those in groceries, agriculture, public transit, postal service, higher education and PPE & pharmaceutical industries.

Until now, the state focused on people older than 65 — the most likely to be hospitalized or die — and has been folding teachers and child care workers in.

Carney and Rattay were peppered with questions by reporters about when COVID-19 mandates would be lifted, the economy would be opened up more and people outside of the 1b group would begin to be vaccinated. They pointed out that other states have lifted restrictions on indoor dining — Maryland did it Tuesday — and that other states seem to have vaccinated a larger percentage of their populations.

Carney said he hopes Delaware can meet President Joe Biden’s goal to have vaccine available to every American by May, but indicated it could be a stretch goal for the First State.

Delaware had hoped by March 1 to move into phase 1C, which includes people younger than 65 who have underlying health issues. It was postponed to continue inoculating people in 1B. No one said Tuesday when 1C would be likely to start.

Carney said he and state officials will study data before making other decisions. He pointed out that the weather will warm up and people will be outside more, where COVID-19 is less likely to be passed around.

“With respect to the states that have dropped their mask mandates, I don’t think that makes a lot of sense,” Carney said. “It’s certainly an ill-informed decision and might reverse some of the gains that have been made.”

Rattay explained where the state’s allotment of vaccine this week will go:

Rattay and A.J. Schall Jr., director of the Delaware Emergency Management Agency, urged people to tell the state if they were not showing up for appointments.

Rattay said they are trying to use every dose of vaccine planned for an event and increasingly more and more people are not showing up for appointments. Organizers assume that’s because someone got a dose elsewhere, which is fine, but the state would appreciate being told that so they can make sure someone else gets it.

“Please keep in mind that you are taking a spot away from somebody else,” she said.

The state doesn’t know why cases are higher in Townsend, she said, but the Newark cases are related to University of Delaware students being back in town and on campus. She praised the university for its mitigation efforts, which included more testing, closing the cafeterias for dining in and forbidding guests to visit the dorms.

By the numbers, as of Tuesday: