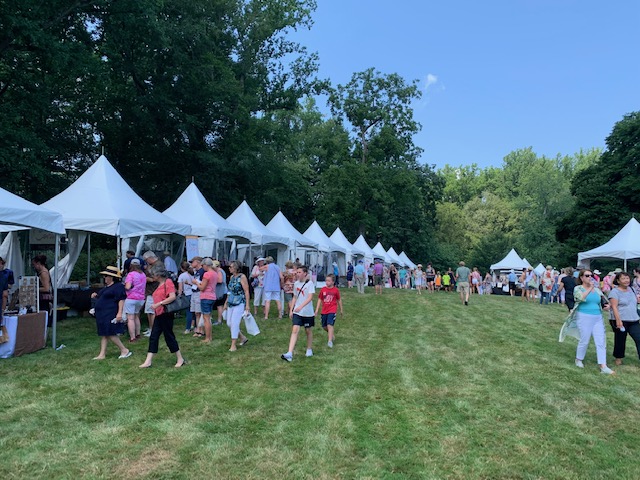 About 4,000 people turned out over the weekend to see Winterthur’s first Artisan Market.

Winterthur Museum’s Artisan Market will return next year.
The inaugural event over the weekend was a raging success, despite Saturday temperatures in the 90s with a  heat index from 102 to 105.
Even with those withering temps, a line of marketgoers stretched from the visitors center to the parking lot Saturday by 10 a.m. as people waited to buy tickets for admission.
Vendors, chosen from regional artisans, were meant to represent American artistry and craftsmanship, an extension of Winterthur’s focus on American antiques and goods.
Shoppers from Delaware and surrounding states seemed thrilled to be there. Most booths seemed to do a brisk business Saturday. Items could be found in many price ranges.
The Farm at Oxford, which offered fresh cut flower bouquets for $20, said it sold six buckets of flower and herbal bouquets quickly Saturday morning.
“Which never happens,” owner Mara Taylor on Facebook. “You all were AMAZING! Every person who came by our booth was so incredibly friendly and complimentary. I heard so many ‘thank you for braving this heat to come today’ when I was thinking ‘No, thank YOU!”

She was amazed at how happy and cheery people were to be out and to be at the event.
“I talked to many people who had sweat dripping off their faces, mirroring my own — who were still so pleasant and recognized what goes into pulling off a market like this,” Taylor wrote. “It was so refreshing.”
The museum hoped to have 1,500 people visit a day to see the vendors spread out on the rolling grounds of the former du Pont estate, and it had 4,000 visitors, said spokesman Mark Nardone.
With 82 vendors spread over five locations on the grounds, Winterthur rans shuttles and trams to the sites, as well as back to the Visitors Center and up to the parking lot. Vendors held packages for customers so they didn’t have to be toted around all day, and Winterthur had a concierge-style service that would pick up big purchases and take them to cars.
By Sunday, the weather was cooler, the crowds lighter and some booths clearly less well stocked than Saturday, indicating the volume of sales.
While some Facebook commenters asked whether the event could be held at a cooler time of year, Nardone said that it’s premature to talk about the date for next year.