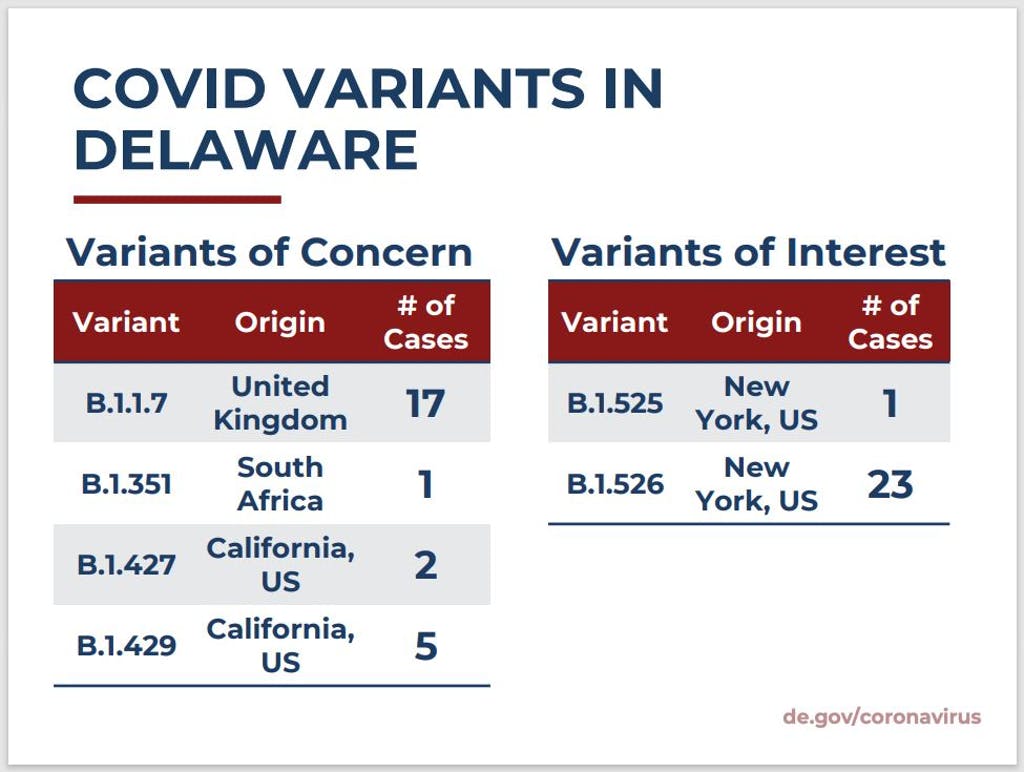 With 4% of positive COVID-19 cases in Delaware showing one of the variant strains that are more infectious, Delaware officials on Tuesday urged people to continue to be tested frequently and to follow safety guidelines.

“These variants are increasing significantly in the New York, New Jersey, Connecticut, Rhode Island and Massachusetts area,” she said.

Overall, she and Gov. John Carney said, new positive cases rose at a rate of about 2o percent in the last week, and the cases are coming from up and down the state.

It’s one reason they opened vaccinations to those 16 and older, and it’s one reason they repeatedly pushed Tuesday during the state’s weekly COVID-19 press conference for people to wear mask, social distance and follow hygiene protocols.

It’s also one of the reasons that Carney said he’s reluctant to allow indoor facilities to accept more people inside.

“There is reason to remain cautious and to just be patient as we’re getting more people vaccinated,” Rattay said.

She said that among 1,152 positive cases that Public Health has tested in the last eight weeks:

“We’ve only seen one of the South African variants, which is good,” Rattay said, “because that is the one that is more contagious and more serious.”

Delaware testing Czar A.J. Schall Jr. reported that testing, which had been declining each week during the last month, jumped up slightly between March 20-26 to 36,262 tests. About 5% are coming back positive, he said.

People are clearly getting out more and gathering more as the weather warms, he said.

“Beach traffic is back to normal levels and it’s still only March,” he said.

With so many people out, people really need to be tested, he said. The state now has permanent testing sites in each of the counties and has more than two dozen pop-ups sites each week, including many on Saturday, April 3.

The state will test people from out of state for free, just like residednts, he emphasized.

“We’re able to handle any spring break travelers or people going from an institution of higher learning to their home and coming back,” Schall said.  “Please get tested. We have that capability We’re not pulling it back by any means. We have seen demand drop a little — with over 1,700 pick up last week, which is great — but we’re hoping to have numbers back in the 40,000 in the next few weeks as we know people are going to be moving more during the springtime.”

Carney announced Monday that the state will loosen restrictions on outdoor gatherings starting Thursday at 8 a.m.

But he said he is reluctant to increase indoor gatherings as case rates rise in Delaware and in surrounding states.

He acknowledged that Maryland and Pennsylvania have been loosening their restaurant capacities somewhat. But even then, he said, there are still restrictions on how close tables can be and how many people can sit together at a table.

Because of that, he speculated that restaurants can only really have around 50% of their stated fire capacity indoors. and said indoor dining limits are just an added layer of protection right now.

“It really is a question there of kind of your attitude towards it. Are you more cautious or less?” Carney said. “Right now, we need to be a little more cautious with indoor gatherings.”