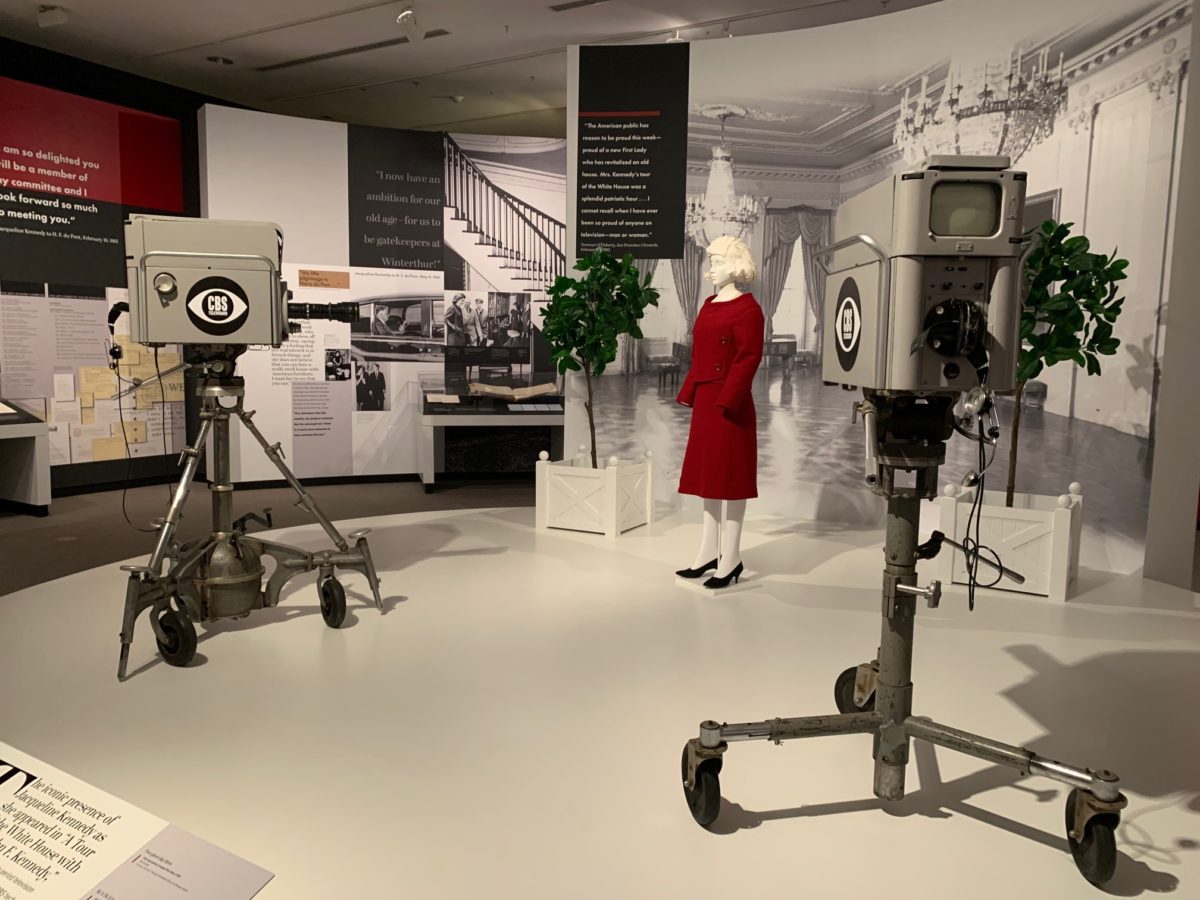 Winterthur’s new exhibit is touted as the behind-the-scenes story of the White House restoration in 1961-62.

Winterthur Museum will be sprinkled with a bit of fairy dust from Camelot throughout the rest of the year.

The estate on Saturday opened its new exhibit, “Jacqueline Kennedy and Henry Francis du Pont: From Winterthur to the White House,” touted as the behind-the-scenes story of the White House restoration in 1961-62.

The work began with Jackie Kennedy writing H.F. du Pont, an early champion of American decor, in early 1961 and asking him to lead the committee that would refurbish the home of the president of the United States.

It ended with her famous televised tour of the White House 60 years ago, in February 1962.

The exhibit opens with a recreation of that TV moment, with two CBS cameras aimed at a mannequin attired in the red dress that the First Lady wore during the Feb. 14 television program.

Against a largely white-and-black color scheme highlighted by the prodigious use of archival photos and letters, that dress commands attention.

It’s on loan from the John F. Kennedy Presidential Library and Museum in Boston, Massachusetts.

On Monday, Gov. John Carney and members of the press got a tour of the then- still-under-construction exhibit from the former Winterthur conservation student whose thesis sparked the idea for the exhibit.

Elaine Rice Bachmann, whose Winterthur thesis served as the basis of the Jackie and H.F exhibit, guides Gov. John Carney through it.

Elaine Rice Bachmann,  who earned her master’s in the Winterthur-University of Delaware Early American Culture Program in 1993, said she was interested in the du Pont-White House connection because her mother frequently talked about it.

The exhibit is one of a few based on Winterthur student theses, said Alexandra Deutsch, the John L. and Marjorie P. McGraw director of collections. The Jackie and H.F. exhibit also is the largest of those, she said.

By the time the Kennedys moved into the White House, it had become shabby. Jackie herself described the interior as a combination “dentist office and bomb shelter.”

The First Lady wanted to re-do the White House to make it both a public jewel that reflected the history of the building and the country, but also a family home, and she didn’t have a budget for the work.

By asking du Pont — then 80 — to head her Fine Arts Committee, she gained access to his contacts in the antiques world and auction houses, as well as to potential donors for the renovation.

The exhibit includes the telegram the First Lady sent du Pont to thank him for agreeing to head the committee. It’s one of many pieces of correspondence in the exhibit from the Winterthur archives.

“I think it’s interesting to see that, really, the way people communicated was through the written letter,” Bachmann told Carney.

“Not a text message,” Carney joked.

“NOT a text message,” she replied.

Jackie Kennedy visited Winterthur in May 19671, and this photo shows her on the Montmorenci staircase there.

One of Jackie’s letters came after du Pont had visited the White House, made a list of what was there and what he thought was needed, and even put price tags on what it was likely to cost.

Some of the top designers of the day — Sister Parish, Bunny Melton and French designer John Stéphane Boudin — were also on the committee.

Bachman said du Pont would go to the White House and rearrange rooms to his liking. The writer suspects that the staff went behind him and returned to the arrangements to the places favored by Jackie.

The First Lady came to Winterthur on May 18, 1961, and the exhibit includes her signature in the guest book and a hugely enlarged photo of her on the Montmorenci staircase.

The house had been a public museum for 10 years then, with H.F. and Ruth du Pont downsizing from the 172-room mansion to the 30-room cottage across the driveway.

After the visit, she sent him a note saying, “I now have an ambition for our old age — for us to be gatekeepers at Winterthur.”

The exhibit includes clips from Jackie’s television interview, including a bit about square card tables that had been given to the White House by Henry Francis du Pont’s sister, Louise Crowninshield. She also embraced historic preservation and was one of the founders of the National Trust for Historic Preservation.

Bachmann said Winterthur tried to borrow the tables from the White House, but they now “very importantly” sit in the Oval Office near President Joe Biden’s desk.

The Winterthur exhibit about decorating the White House will include examples of the Red, Green and Blue rooms’ decor.

Being appointed as head of the White House committee raises du Pont’s profile. The public was invited to reach out to him if they owned any pieces they thought belonged in the White House, and one wall of an exhibit shows three dozen of the many letters he received.

“From Winterthur to the White House” includes a look at how the renovation changed three public rooms in the White House: the Red Room, the Blue Room and the Green Room.

The First Lady had felt the contrasts of the dark colors were oppressive and wanted to change them to better complement each other. She would choose an emerald green, lively wine and soothing lighter blue.

Jackie’s renovation set a precedent in the White House. She established a White House Office of the Curator and was able to have legislation passed making the National Park Service responsible for the White House interior, Bachman said.

Each new First Lady usually appoints her own Fine Arts Committee to oversee the White House decor or changes, all usually paid for by donations.

du Pont was invited to many of the White House State Dinners, including the Kennedy’s first, held at Mount Vernon. He always sat at the First Lady’s table.

“From Winterthur to the White House” includes a photo of him at Mount Vernon, as well as his many place cards, which he often asked other guests at the table to sign.

The exhibit will include a guided house tour, Walking in Jackie’s Footsteps, that follows the path Jacqueline Kennedy took on her trip to Winterthur. Reservations required. Please call 800.448.3883 or email [email protected] for information. (All visitors must wear a mask on guided house tours).

The pop-up store at the end of the exhibition features items inspired by the White House restoration project and Jackie’s iconic sense of style, including sunglasses with big lenses. More will be on sale in the Museum Store in the Cottage.

For more information, go to Winterthur.org.