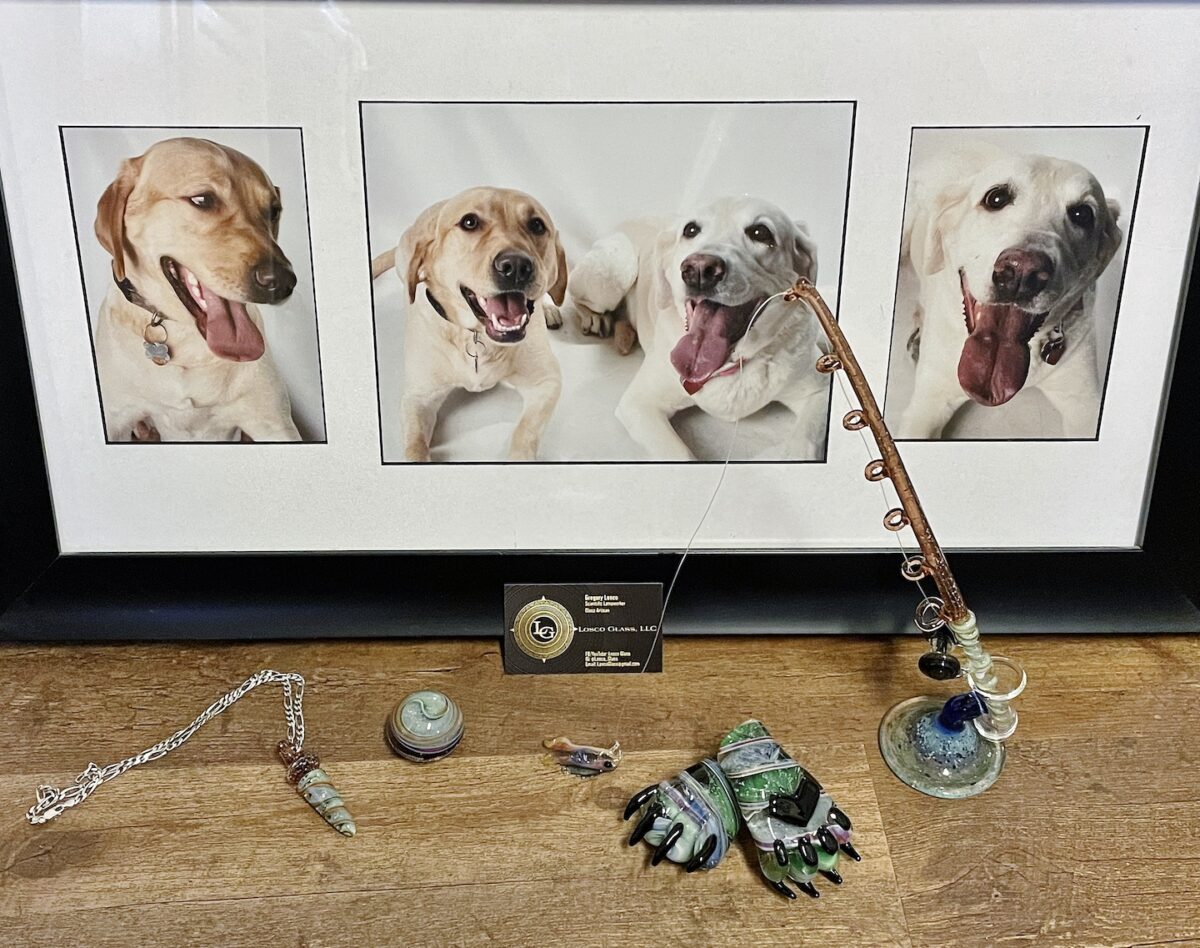 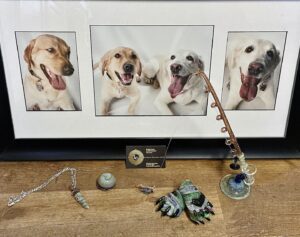 Greg Losco makes glass memorials that use ashes from cremations. This set uses ashes from the dogs Duke and Abby. (Greg Losco photo)

Glass artist Greg Losco was giving a demonstration in Lewes when he met a woman wearing a keepsake pendant holding her mother’s cremated ashes in a vial with a cork.

He had heard of a better way to memorialize loved ones: encasing the ashes in the glass.

He tried the technique in front of her, and thus was born his new line of cremation art, which is built on his degree in scientific glass technology and years of experience in glass.

“It’s almost surreal, working with a person,” he said. “A special feeling, hard to describe. There’s more vibrancy and color than something in a box. It helps remember them in a more positive way.”

Losco is the only artisan he knows near his Wilmington home studio who creates cremation art.

He had heard about the concept using soft glass, although he works in the tougher borosilicate glass. Since that first experiment in 2016, he’s devoted years to perfecting his work with the treasured ashes.

As he says on his website, he creates art “that celebrates the life of those we love most.” 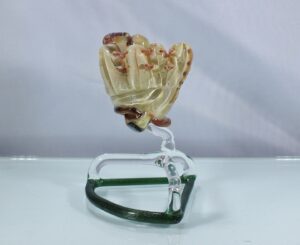 One meaningful creation is a softball glove for his mother, Denise Losco, made from the cremains of her father, Joel Gerber.

It reminds her of the fun time she had playing catch with her father. He also made several heart-shaped paperweights and a heart-shaped pendant from his ashes.

“It’s a form of closure,” he said. “A way to think about all the interaction.”

He also created a set that encases the ashes of Abby and Duke, a friend’s dogs, in blue and green bands, keeping them separate yet together.

“I thought it was beautiful,” he said. “Poetic.” 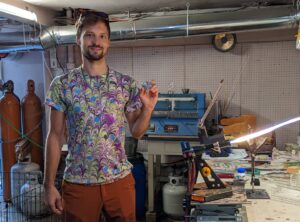 The heart in Losco’s hand has ashes from his mother’s best friend. (Ken Mammarella photo)

In his studio, he treasures a heart-shaped paperweight made with the ashes of Joann Ryan, his mother’s best friend.

One last piece he showed off is a pipe labeled “45.” A woman commissioned it from the ashes of her brother, an athlete who played as number 45 on his team, so she “could smoke with him forever.”

He has fine-tuned his technique in cremation art. First, for people and pets he doesn’t know, there’s a brainstorming session where he asks about their life for inspiration on colors and styles.

The white flecks are the ashes from cremation, also known as cremains. (Greg Losco photo)

He asks for a teaspoon of the ashes, which he sifts to use only the finest pieces in his cremation art.

He bonds the ashes into glass he has heated with a tabletop torch, and the result scatters the off-white flecks like stars in the sky.

To mark the completion of each piece, he rings the gong that graces the wall of his studio.

RELATED: Wilmington is turning an old police stables complex into studios and an amphitheatre

A few customers have let him use extra ashes for experimentation and demonstration pieces, but the cremains are definitely not part of his other work, which includes pipes, stemware, pendants, Christmas ornaments and a trophy for his disc golf league.

Since 2020, glass – with ashes or not – has been his only income, and, following stints in corporate America, he relishes the freedom of being his own boss. 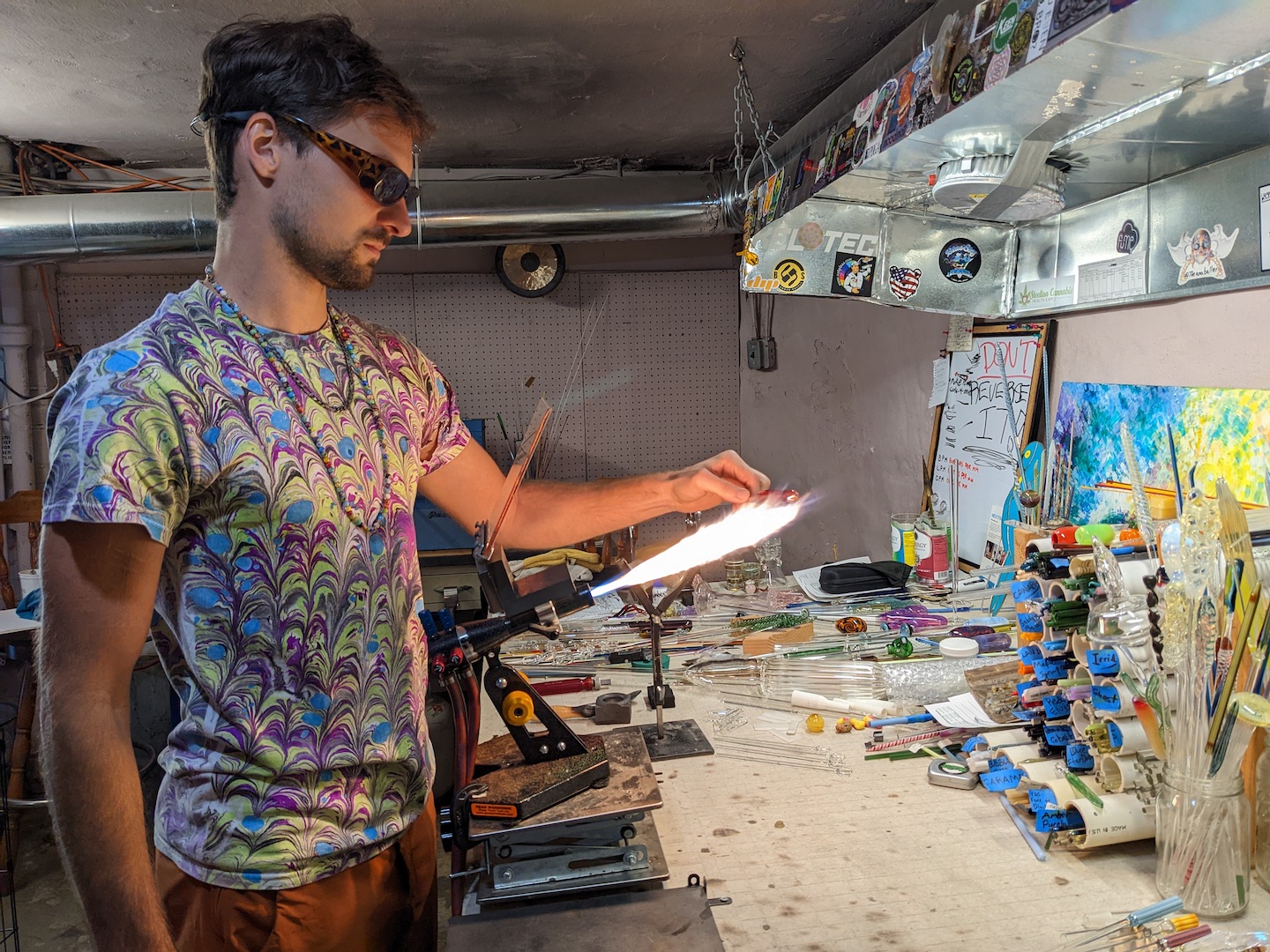 Losco in his Wilmington home studio. He and his partner avidly support the arts: He’s wearing a handmade T-shirt and necklace. (Ken Mammarella photo)

Losco grew up artistically in North Wilmington, painting and sculpting. He is a graduate of St. Elizabeth High School in Wilmington.

In 2015, he earned an associate’s degree in scientific glass technology – America’s only program of its kind – from Salem Community College in New Jersey.

The home he shares with partner Stephanie Swartz (herself a painter and furniture refinisher) is filled with eclectic pieces of furniture and art, including some that they made.

His interest in artistry also shows up in his attire: On the day of the interview, he wore a T-shirt made by a friend and a handmade millefiori necklace.

He finds the work  both physical (he prepares his body by starting his day with yoga and a workout) and mental (he works alone, and meditates on all the meanings of life as he creates).

Upcoming shows include the Kennett Arts Festival, Oct. 15-16 in Kennett Square, Pennsylvania; the Center for the Creative Arts Artisans Show, Nov. 19-20 in Yorklyn; and holiday shops in December at the Creamery in Kennett and Gild Hall in Arden.

“You can do anything you want with glass,” he said.

Losco has contemplated having his cremains turned into cremation art but favors being buried, with a sapling planted on top of his body.

“A big theme of my work is growth,” he said, and he likes the idea how the body that he no longer needs will nurture the sapling.

“Basically, the tree is your headstone.”