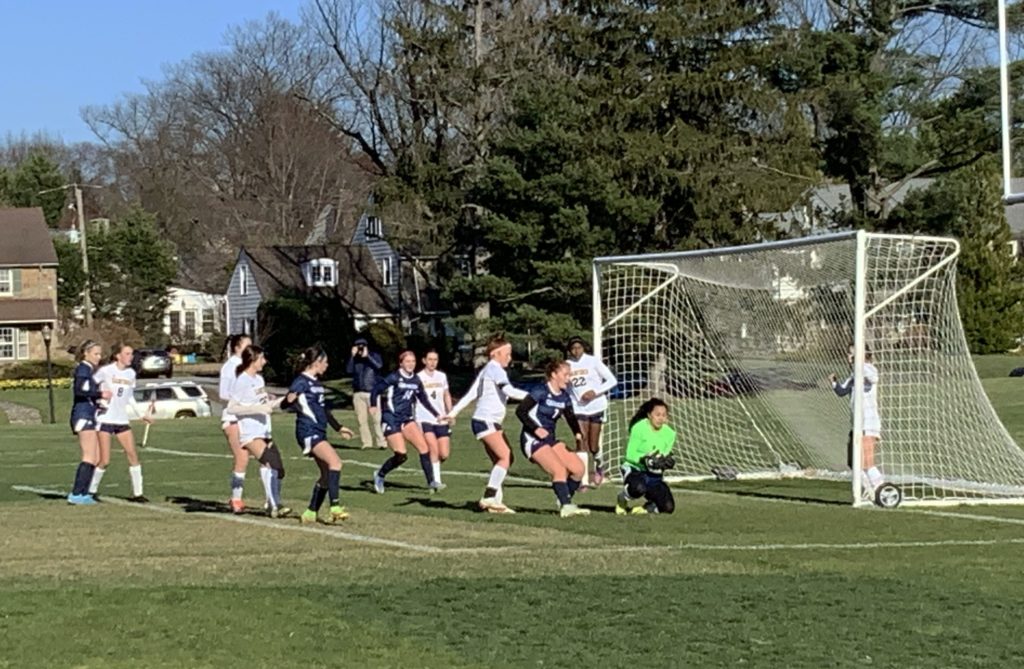 The Sanford girls’ soccer team visited Wilmington Friends Tuesday afternoon for an Independent conference school match-up between two squads looking to improve on last season’s success. The first 10 minutes of the match, the Quaker midfielders controlled the pace of the game putting a tremendous amount of pressure on Sanford’s defense. However, Sanford’s “bend but don’t break” approach kept the Quakers offense just out of step enough to limit the home team to any solid scoring opportunities. The first shot on goal for either team came with 17 minutes to go in the first half as Friends pressured the Sanford defense higher, forcing them to make quick decisions. The Quaker pressure intensified as they ripped off a number of shots but were unable to send any past the Warrior goalkeeper.

The final 15 minutes of the half delineated the technical ability of the Friends midfield from the Sanford squad all except for the center backs who were able to disrupt the Quaker offensive just enough to break up the final passes into the 18-yard box that could have resulted in a shot on goal. The half ended with a 0-0 score, 3 shots on goal for Friends and no shots on goal for the Warriors squad.

The Quakers continued to dominate possession early in the second half. Sanford defenders looked tired but held strong at least for the moment as the Quaker runs down the sidelines resulted in crosses into the 6-yard box and corner kicks. As the second half entered its final 20 minutes, the momentum continued to build for the Quakers as the Sanford Defense continued to lose steam. Then, with 19 minutes to go, #5 for Friends, Reagan Brady, made a great move with the ball to separate herself from the Warrior defenders and take the ball down the sideline. As the defenders caught up, Brady cut the ball back to the middle and ripped a beautiful left footed shot back across the keeper into the side netting for the first goal of the game.

The Quakers found the back of the net again with 7 minutes to go off another deep run in the corner by #12, Simran Dattani, who sent the ball across the 6-yard box until it met the feet of Ryan Weigand who tapped it into the back of the net past a recovering Sanford keeper. Wilmington Friends went on to win the game 2-0. They play again this Thursday at DMA who is coming off an 8-2 loss to St. Mark’s Tuesday evening. Sanford will host Newark Charter on Friday afternoon.