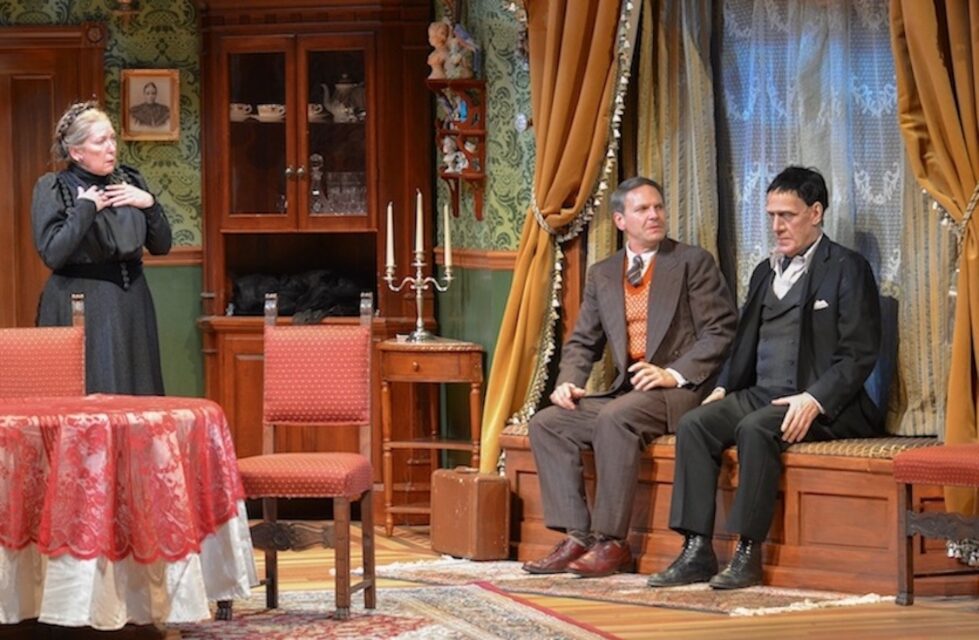 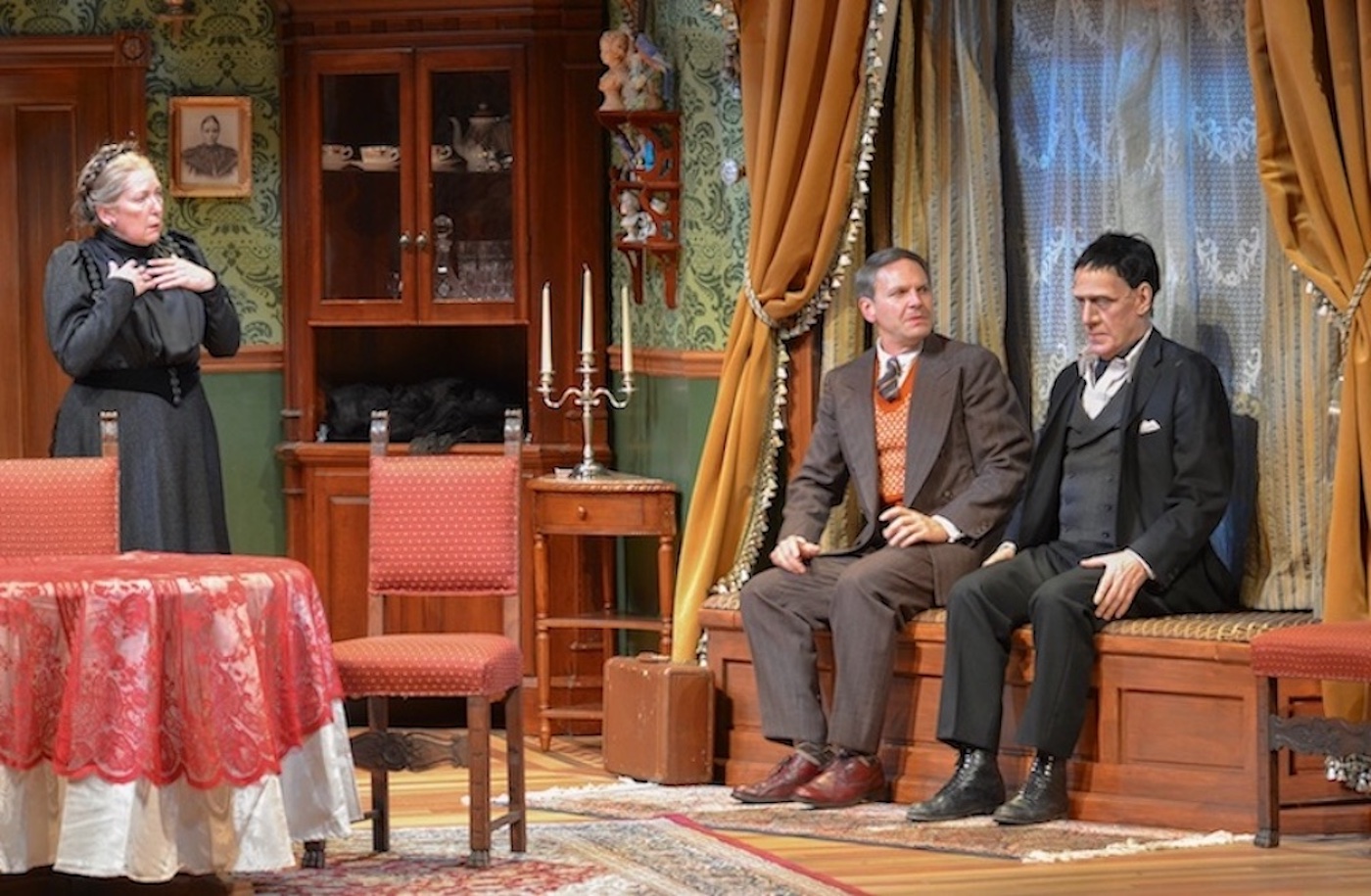 Arsenic and Old Lace is a “bit of a love letter to the theater,” according to actor Mic Matarrese. “It does everything that’s nice and great about theater and is a good time.”

The University of Delaware Resident Ensemble Players presents the 1941 comedy through Nov. 20.

Matarrese said that his character, Mortimer Brewster, is the “engine” of the Joseph Kesselring classic. “He’s the one who knits all the other characters together and aims them in a certain direction, either away from discovering the secret of the aunts, or trying to obviously escape from something.”

Mortimer is the Brewster with a normal job: drama critic. His brother, Teddy, believes he is Teddy Roosevelt, sometimes digging the Panama Canal. Another brother, Jonathan, is a criminal on the run with a spooky resemblance to horror legend Boris Karloff. And aunts Abby and Martha have assigned themselves the job of poisoning lonely old men.

“Insanity runs in my family,” Mortimer tells his girlfriend, Elaine. “It practically gallops.”

Steve Tague, named the REP’s interim producing artistic director following the retirement of Sanford Robbins, said he selected the show because of its timeless appeal.

“Most of the comedy we watch is stuck in time, and no one will find it funny in 10 years, let alone 80,” Tague said. “This play is about 80 years old and still funny. How is that possible? It must mean it’s making fun of something that will never get old or out of date: suffering from your family’s behavior.”

“I also find it interesting that in this case, we find it funny that women are killing men,” he said. “We have three plays this season in which women kill. One is a comedy, one a satire and one a tragedy. How is that possible? The same basic subject matter through three different artistic lenses.

“That’s the beauty of art … the same basic subjects over and over, but renewed, re-viewed through the new lens of each artist.”

That said, the show is set in the 1940s, in a Brooklyn house, next door to a cemetery. The house is newly electrified, the décor decidedly old-fashioned, and the police officers the friendly types who pop in just to see if everything is all right.

“Theater always is happening now, so we’re not doing a museum piece that people come and see ‘how they used to do it back in the day.’ ” Matarrese said. “They’re coming to see a thing that’s happening right now. So I’m trying to knit together the modern sensibility with how it used to be. How it used to be is a little creaky, but how it is now can be adapted to it.”

“The craftsmanship on it is so clean, so clear, and so precise,” he said. “There are no wasted words, no wasted moments, nothing in there for the sake of a joke, nothing that isn’t integral to the moment.” 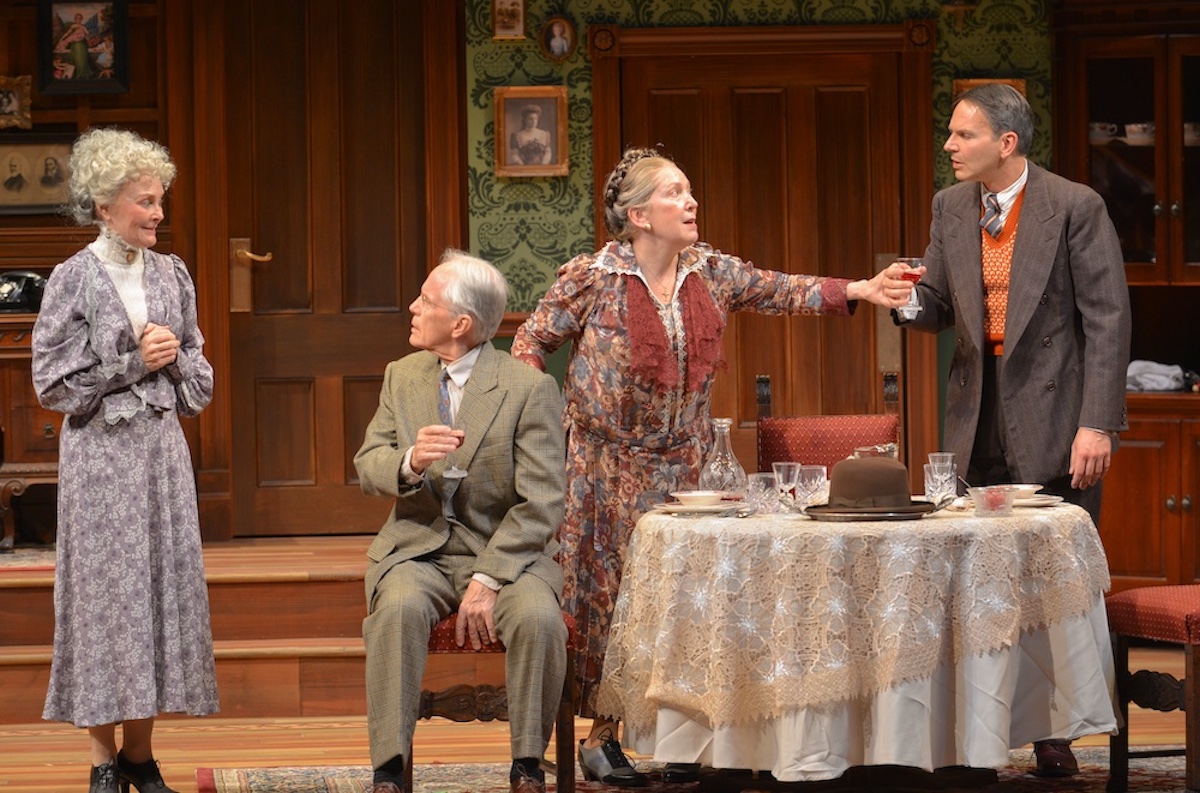 A reprise of sorts

Matarrese came to UD as a grad student in 2004, earned his degree and then returned in 2008 as part of REP, performing in about three dozen shows at UD.

He recalls watching the movie version – Cary Grant had his role – while in grad school, and his classmates were analyzing films from Hollywood’s golden age.

He didn’t watch it anew after he had been cast. “It doesn’t really fix anything if you watch the movie,” he said, “because you still need to go out there and do it yourself.”

He acknowledged that some audience members will have the movie in their head, but “that ultimately doesn’t linger around very powerfully during the show, in my experience,” he said. “Hopefully the live performance of it will be absorbing, and that’s that.”

At 44, he’s two decades older than his character is written but feels his maturation as an actor makes him better equipped for the part and the play. It also helps that the actors playing his brothers are older as well.

He feels that he understands finesse more and has “a more refined kind of sensibility” to portray a young man “starting out down life’s road.”

“The three acts are just like a fun little roller coaster ride, and it’s not like everything is all right at the end,” he said. “The merry murderesses carry on.”

“Arsenic and Old Lace” is at the Roselle Center for the Arts on UD’s Newark campus through Nov. 20. Tickets are $30-$39, with discounts available for students, seniors and UD faculty and staff. The three-act show runs two hours and 40 minutes.