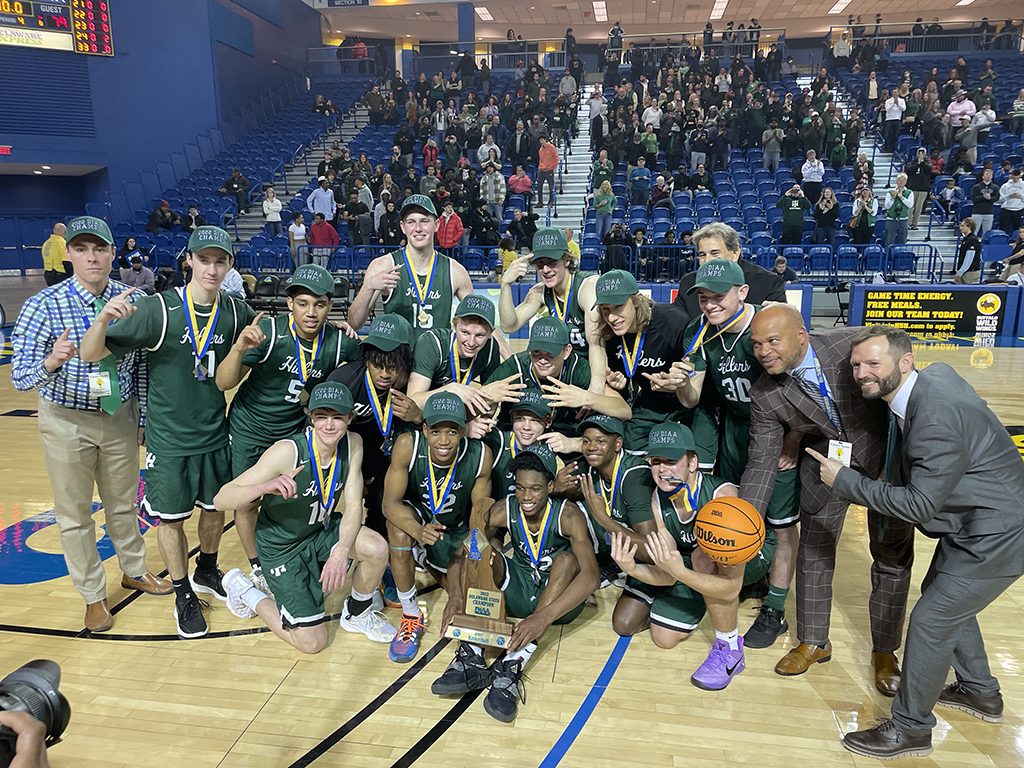 The #3 seed Tower Hill took on the #1 seed Salesianum in the DIAA boys’ basketball state championship game at University of Delaware Saturday night in a match up of first time finals participant the Hillers and multiple championship winner Salesianum High School. Tower Hill earned their way here Thursday night with a combination of well executed offensive and a well coached man-to-man defense which carried them passed Seaford without much resistance. Sallies also had similar success in their semi-final match-up against Howard High to avenge a loss to the Wildcats in the regular season.

Despite the uncharted waters that Tower Hill found themselves in, nerves were not a factor as the Hillers came out on fire shooting a scolding 6 for 7 from the 3 point line in the first quarter. Sallies called time out mid way through the quarter to attempt to cool the Hillers down it only temporarily stopped the hot shooting. Sallies had no answer for the time being as they trailed 18-4 at the end of the quarter.

The unbelievable shooting carried right over to the beginning of the second quarter as Davis Bland made two deep threes in the first minute of the second to extend the lead to 24-4 with 5:25 to go in the half. Sallies continued to play hard but found it difficult to generate anything offensively as the lead ballooned to 30-7 with 2:30 to go in the half. Sallies would go on a mini run in the last minute of the half but tower hill would answer usually on the very next possession leaving the Sallies with a tremendous amount of ground to make up in the second half. The Hillers shot 53% from the field and 52% from the 3 point line while Sallies shot just 12.5% from threes and 25% from the field.

Sallies came out with a renew sense of purpose in the 3rd, grabbing their first offensive rebound of the game and trapping Tower Hill on every opportunity which seemed to slow the Hiller offense at least temporarily. Davis Bland continued to be the story of the game so far as the senior swing man for Tower Hill made his first two 3-point attempts of the half to give the Hillers a 41-16 lead with 4:29 to go in the quarter. Although the Sallies pressure gave the Hillers a challenge they were up to the task as they methodically found gaps in the press which led to easy lay-ups on a number of possessions. The quarter ended as it began with David Bland releasing another deep three point shot that went down giving him 6 made three pointer on 9 attempts.

Tower Hill would knock down yet another three point shot on the opening position of the 4th quarter to extend their lead to 30 points making the game clock just as much of an opponent for Sallies as the Hillers. Sallies looked to foul early in the quarter but the Hillers played smart and make cross court passes and avoided a large number of fouls attempts. As the quarter hit the 4 minute mark the outcome seems to be a foregone conclusion as the Sals were unable to convert on the offensive end and Tower Hill made free throw after free throw to eventually give the Hillers a 35 point lead with 2:30 to go in the game. The Hillers would go on to win the game 79-43 and give the Hillers their very first high school state championship in basketball, which anyone who follows high school basketball in Delaware would have though was improbable if not impossible just a few years ago.

Tower Hill finished the game with 4 players scoring in double figures led by Dylan Shepard with 24 and Davis Bland with 23.  Dean Shepard chipped in with 18 and Marty Coyne added 10. Brett O’Hara led Salesianum with 13 points, in what was the largest margin of victory in the state finals ever. Tower Hill shot a lights out 64% from the field, 63% from threes and 20-26 from the free throw line which made a Sallies comeback virtually impossible. Final score, 79-43.