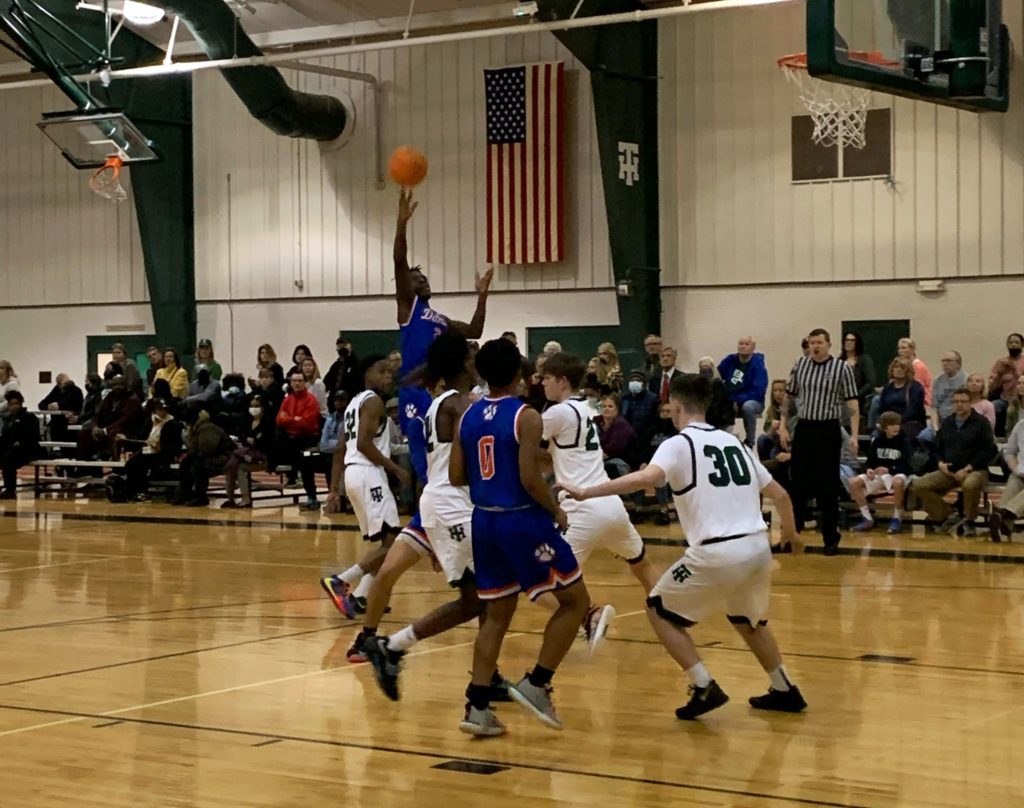 #3 Seed Tower Hill hosted the #19 seed Delmar Wildcats in the 2nd round of the DIAA boys’ basketball state tournament Tuesday evening. Delmar comes into the game coming off of a 59 -54 upset win over Woodbridge High School. The first quarter saw Tower hill take an early 7-1 lead almost exclusively on the pure athleticism of junior Dean Shepard. His quick movement with the basketball coupled with a smooth 3-point shot quickly became the focal point of the Delmar Defense. The quarter ended 12-6 with a sense of the game starting to slip away from the Wildcats.

The Hillers would start to pull away early in the 2nd quarter scoring on a number well executed fast breaks that quickly extended the lead to 24-9 with 4 minutes to go in the half. Tower Hill received strong contributions from junior Dylan Shepard and senior Davis Bland as Delmar had to work harder and harder to get a clean look at the basket. Delmar was only able to come up with 14 point in the half. While the intensity level and quality of play of the Hillers seemed to elevate as the quarter progressed. Tower Hill by no means played a flawless half but the Wildcats would have to make some significant changes coming out of halftime to get back in the game.

Delmar came out of the locker room with a sense of purpose offensively, getting contributions from a number of players who were quiet in the first half. The Wildcats attacked the basket and often came up second chance opportunities that they were able to convert. Conversely, Dean and Dylan Shepard found it more difficult to get to the basket as Delmar tightened up on the defensive end. All eight minutes of the third quarter clearly weighed in favor of the Wildcats as they brought the Tower Hill lead down to 39-33 heading into the final quarter.

Back and forth they went in 4th. With Dean Shepard on the bench for the first 5 minutes with 4 fouls, the two sides matched up evenly at both ends with Delmar continuing to attack the basket and finish around the rim. Despite the Wildcat push, the Hillers held strong and maintained a 6 to 10 point lead throughout the quarter. With 1:35 to go in the game and a 54-44 Hiller lead, Delmar called timeout but turned the ball over on the very next possession. Tower Hill would go on make the majority of their free throws in the last minute and 35 seconds to put the game out of reach and secure a 60-44 victory over a young Delmar squad. Tower Hill will now move on to a quarter final matchup with St. Marks on Saturday afternoon.