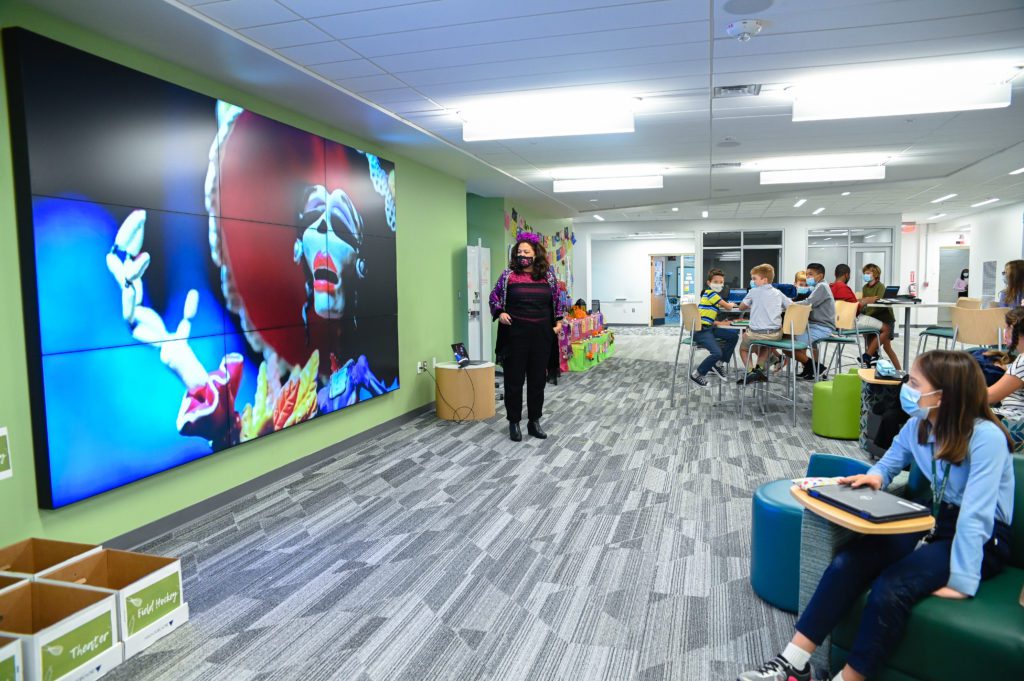 A video wall in Tower Hill’s Hub can be used by teachers, students.

“THE Hub is a place where it is constantly buzzing,” said Andrea Glowatz, dean of Teaching and Learning at Tower Hill School.

The Tower High Education Hub, usually referred to by the students and staff as THE Hub, is an innovation center that replaced the old library.

THE Hub features a design lab, an innovation commons area with a large digital display wall, several “huddle rooms” for students to collaborate, floor-to-ceiling windows to let natural light into the space, and a teaching and learning center.

It also features a large living green wall, equipped with an irrigation system, that gives texture to the space.

Faculty and students say THE Hub looks and feels like part of a college campus. 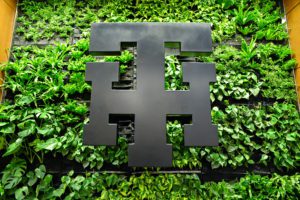 A living wall adds color and texture to Tower Hill School’s Hub, which replaced the library. 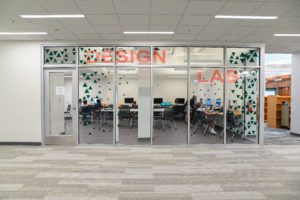 Students often have to walk through the center to get to class, so THE Hub acts as a metaphorical nucleus of Tower Hill.

The school declined to talk about its cost, paid for as part of the Tower Hill 100 campaign, honoring the school’s 100th anniversary in 2019. That campaign, which has a goal of raising $19.19 million, is set to end this spring and already has exceeded its fundraising goals, said Amy Shrei, director of communications and marketing.

The students love THE Hub.

“I use the Teaching and Learning Center everyday. Almost any time I have a free period, I’m here,” said Megan Angeny, a sophomore. “It is a quiet study space but also a space of collaboration to get opinions on my ideas.”

Emani Larkin, a junior, said her favorite part of the new center is the booths that line the outer area of THE Hub.

“I get to sit and either talk with my friends or work on projects, and there’s also really good white boards to use and collaborate on,” she said.

THE Hub was designed to be able to keep technology up to date and also create a more welcoming and inclusive environment in which students can work. The construction also created more classrooms. 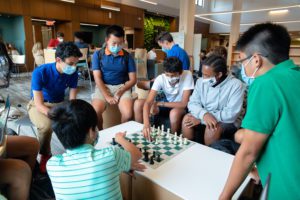 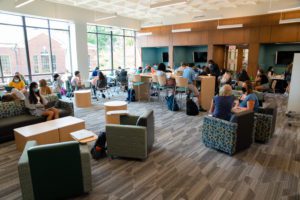 The commons area in Tower Hill’s Hub is meant to offer students a variety of studying and socializing options. 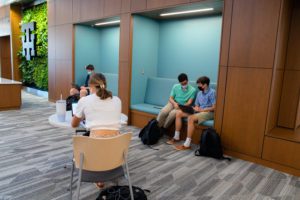 “The old library looked very old,” said Glowatzl. “We had the dark wood tables and the wood paneling and the wood cubicles and everything was hard and cold — it didn’t look like a place where students would want to congregate.”

With the renovations, Glowatz said the students of Tower Hill have a welcoming space that is conducive to getting work done.

The books are still there, but pushed to the outside rather than being a focal point. The arrangement allows the books to be organized better and to be more accessible to the students, Glowatz said.

Matthew Jackson, the director of THE Hub, said the space allows a group to carry on a full conversation in one area while in another, a student can sit with headphones on, laptop in front of him or her,  book to the left, water bottle to the right.

“And they’re just jamming away getting their work done,” he said.

The smaller enclosed rooms cater to students who prefer to work in a quiet private space.

Jackson said the school listened to student feedback when it designed the space and will continue to.

“It’s nice to know that our feedback matters,” said Angeny. “They’re able to take our input on what we like and dislike about the area and try to fix it to make everyone feel comfortable in the environment.”